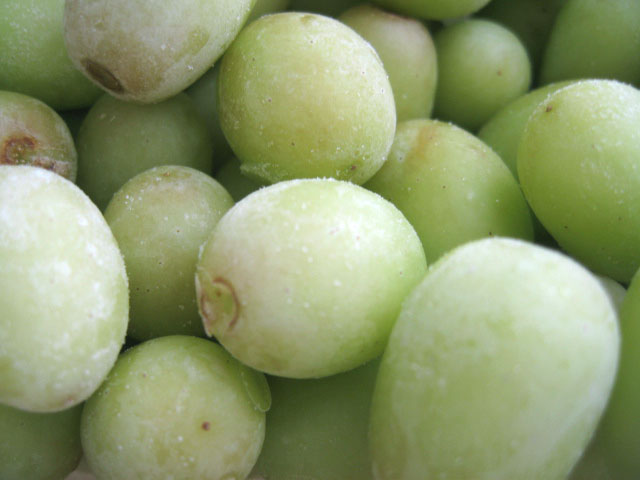 Though summer is about to come to a close, you still might be looking for a healthy frozen treat. Here's one to consider: frozen grapes. Something wonderful happens to grapes when you freeze them. They become crunchy and captivating on the tongue. The sugars inside the fruit must become concentrated because they become as appealing as ice cream.

Santa Maria brought home some grapes the other day, and Pinta thought she should freeze them. “Make a big batch,” she said to her mother. I asked her why, and Pinta replied, “Because I like them.”

I’m not the first to discover frozen grapes (the idea came into our house from Santa Maria, and I’m sure she got it somewhere else), and I know I won’t be the last to recommend them. (My friend Debbie Koenig wrote about them a few years ago, and compared them to something that can’t be mentioned in a family blog).

They are so easy to make, it its almost unbelievable. Just rinse and dry a bunch. Take them off the stems if you’d like. Put them on a baking sheet.  Or not. And just put them in the freezer until they are hard.

Santa Maria put some in our freezer’s ice bucket the other day, and a few ended up in some glasses of drinking water by accident. Just watch out for that.

I get many nice notes in my inbox related to this blog. A recent message from a reader, Michele Hays, who commented on my post about the trouble I had getting my kids to eat my roasted red peppers, alerted me to a potentially helpful resource, It’s Not About Nutrition: The Art and Science of Teaching Kids to Eat Right. The blog is run by a sociologist named Dr. Dina R. Rose, and I know I’ll be spending some time reading it.

And the other day, I received a fun invitation from the folks behind The Motherhood. They’re putting on a virtual cooking class on Feb. 2 at 1 p.m. called “Game Day and Slow Cooker Recipes,” and they asked me to co-host it.

I hope you can join me. We’ll be asking and answering questions about getting ready for the big game by firing up the slow cooker. I’m a great believer in getting the cooking done before kick off (as I did by making Frikadeller when the Giants triumphed over the Packers a few weeks ago) and the slow cooker is a great, hands-off tool for feeding a lot of folks.

My father-in-law has a slow cooker, and I’ve used it a couple of times. What tips do you have for using a slow cooker? And if you have any questions, send them my way, or jump into the class on Feb. 2 at 1 p.m. 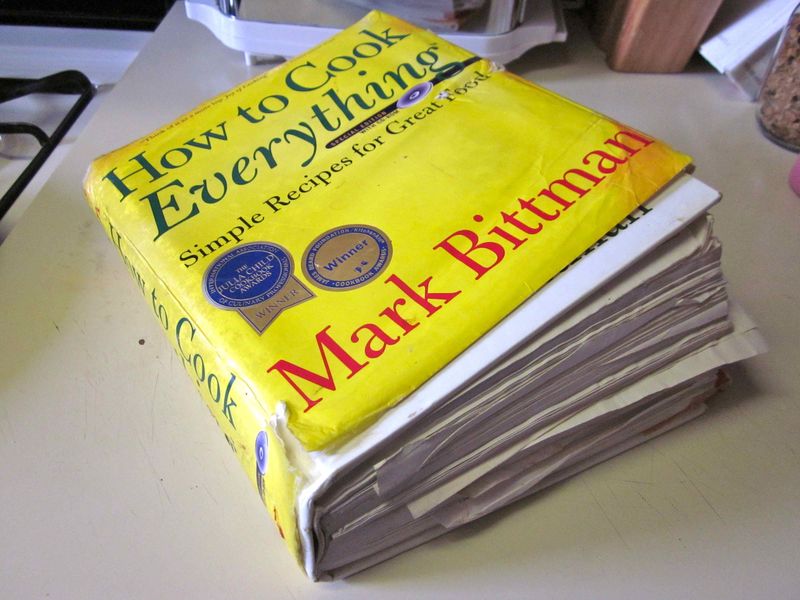 Long before I had kids, I was looking for a good football-watching party dish, so tried my hand at Mark Bittman’s “oven-grilled” ribs. I was going to take them to my brother’s apartment for some big playoff game (I don’t remember which one) but I came down with a wicked case of pink eye and stayed home.

Santa Maria and I had a whole tray of ribs to ourselves, and we went wild over them. They’re easy to love—simple to prepare and more tasty than you have any right to expect. I haven’t made them since, though. I thought my life was too complicated with a job and two kids, but I recently learned that’s not a good excuse.

My friend Jon Michaud, the head librarian at The New Yorker and a regular contributor to newyorker.com, makes them repeatedly. He lives in Maplewood, New Jersey, with his wife and two children. The son of a pastry chef, he cooks most of the meals his family eats. Jon is also a novelist, and his first book, “When Tito Loved Clara,” will be published by Algonquin Books in March. Here is his story about making the ribs.

This February will mark the tenth year in a row that I'll make spareribs for the Super Bowl. I first made them for a party at my sister's house in Bethesda Maryland. My wife, Z, and I--newlyweds--had just moved to the D.C. area after our September wedding. (Yes, that's September, 2001.)

We lived in a small two-bedroom apartment in Alexandria, Virginia, and my wife was in the earliest stages of pregnancy with our first son—so early that we weren't telling anyone about it. Not having lived with a pregnant woman before, I didn't realize how heightened her sense of smell could be. If I had known, I might have chosen to make something less odiferous than ribs—perhaps untoasted bread with butter.

At Christmas that year, I'd received the original edition of Mark Bittman's “How to Cook Everything” (the one with the yellow cover), and I intended to put it to use. Not having access to a barbecue grill, I opted for Bittman's “oven-grilled ribs” made two ways: a slab of dry ribs with “Chris's great rub”* and a slab of wet ribs using Bittman's home-made barbecue sauce.

Before I'd even finished cooking the sauce, my wife fled the living room that adjoined our kitchen and took refuge in our bedroom. “What the hell is that smell?” she said, slamming the door behind her. For the next three hours, as the ribs cooked, our apartment filled with the thick, saliva-inducing scent of barbecue sauce, pork fat, paprika, cumin, and chili powder.

It was too cold to open the windows and my wife buried her head under a pillow. She hadn't had morning sickness yet, but it seemed likely to arrive at any moment. “God, how much longer is this going to take?” she asked. When I told her there was two hours still to go, she said, “I'm going out for a walk,” and disappeared. Meanwhile, I didn't want to go anywhere. If those ribs tasted half as good as they smelled, they were going to be a treat.

When they were done, we loaded the two trays into the trunk of our car for the half-hour drive to Bethesda. No sooner were we on the George Washington Parkway than Z looked at me, like the heroine of a horror movie, and said, “I can smell them! It's coming in through the trunk!” I pushed down on the accelerator and hoped the cops were all busy watching the pre-game show.

The ribs were a huge hit, and even as my family members were eating them they were asking me, “You're going to make these again, right? Maybe next week?” I nodded, because that's what every cook wants to hear—when can I have more of this? I decided that a tradition had been born. Even my wife tried them and admitted they weren't bad.

Over the years, I've made those Bittman ribs in any number of ways—on a gas grill; on a charcoal grill; with cayenne or cinnamon added to the rub; with baby back ribs, and even with beef ribs. Some years they've come out crispier and some year they've come out wetter. It doesn't matter: there are never any leftovers.

Last February, I got a call from my sister in Bethesda, who was hosting a party for the Saints/Colts Super Bowl. She wanted to make the ribs. I had given her the revised edition of “How To Cook Everything” (the one with the red cover) for Christmas that year, and I directed her to the index. “It's not there!” she said. “That's not possible,” I said. “That's my favorite recipe in that book.” I told her to look again, in the chapter on meat. She did: no oven grilled ribs. No rub. (There's the rub!)

I took down my copy and transcribed the recipe into an email and sent it to her. At the bottom of the e-mail, I wrote: DO NOT COOK IN THE PRESENCE OF PREGNANT WOMEN.

Pre-heat the oven to 300 degrees F. Mix the salt and all the spices together and rub them well into the ribs and pace in a roasting pan in one layer. Bake, pouring off accumulated fat every thirty minutes or so, for about two hours, or until the ribs are cooked. (If you're in a hurry, cover the roasting pan with aluminum foil. When you're ready to eat, roast the ribs at 500 degrees F for about ten minutes, or run them under the broiler, watching carefully, until nicely browned.

*Chris Schlesinger, co-author, with John Willoughby, of “The Thrill of the Grill.”