Home Archives About
Dishwrecked!
What's the One Thing to Do to Get Better at Cooking for Kids?

How Did I Get Here?: The Metaphysics of the Lemon Reamer 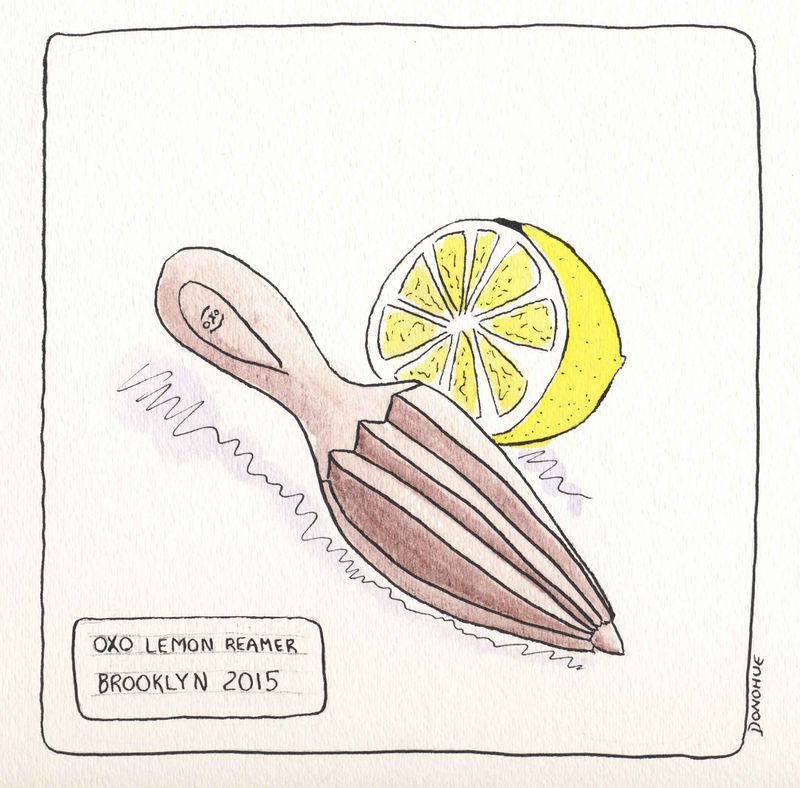 Sometimes, you can judge a book by its cover. I just finished “How Did I Get Here?” by Jesse Browner, and if you’ve ever asked yourself the question its title poses, you’ll be well rewarded by reading it. Browner, a talented novelist and translator, as well as family man and home cook, writes with humor and insight about the tension between responsibilities and aspirations. Speaking of the latter, I have mentioned before that I’m going to include more of my own illustrations on this blog, and I’m starting a new project, where I draw kitchen tools and implements. I had the great good fortune of making Browner’s recent acquaintance, and he offered to write about a favorite of his. Enjoy!

I estimate that I have had to replace my wooden Oxo lemon reamer at least four or five times in the past few years. I find this trend disturbing, as I am not otherwise given to carelessness. What happens to the lost reamers? I don’t know. Is there something about them that makes them especially easy to mistake for objects that need to be thrown in the garbage? I don’t know. Is it me, or my wife, or my children, or guests helping to clean up after dinner, or the cleaning lady who throws them away? I don’t know. Is it possible that they have not actually been thrown away at all, but that they have the ability to wink in and out of existence, like quarks? I don’t know, but I am beginning to suspect that very thing.

The wooden Oxo lemon reamer is not an exotic accessory. When one goes missing, I am able to walk three blocks from my home and find its replacement, which is indistinguishable from the original, which itself was once a replacement. They all look exactly the same, down to the tiny, laser-cut alien logo on the handle. Once it is nestled in its niche of the utensil drawer, it is impossible to know whether this is the new reamer or the one that had gone missing, now re-embodied. Searching the drawer for the other won’t help, because the new one may just as easily have disembodied simultaneously. If you do find two, it is just as likely that they are one and the same reamer existing in two places at the same time, like a tachyon. It is this quantum personality of the lemon reamer that encourages me to believe that it is endowed with certain mystical capacities not possessed by any of my other utensils.

But its probabilistic behavior is not the only quality that lends my reamer its metaphysical ambiguity. You may have noticed that you do not have many kitchen utensils in your arsenal that are made of wood. Spoons, salad tongs, chopping boards – most likely very little else. If you are me, you also have a wooden lemon reamer, which – unless you are an accomplished woodworker – is almost certainly the only object in your kitchen that you could even remotely imagine having made yourself, with a whittling knife and a little chunk of beechwood.

Go now, since you are at your computer, and type “lemon reamer” into the Amazon.com search bar. The results will show you reamers made of stainless steel, aluminum, glass, plastic transparent and colored, and wood. Now look just at the wooden ones -- among the Norpros, the Naturally Meds and the Holy Land Markets, the Oxo seems pared down to the most basic, essential quiddity of the lemon reamer. No ornament, no design flourishes, no excess of any kind. Less than simply modern and functional, it looks positively primitive. And that is precisely how it feels in the hand, for reasons I can’t entirely explain. When you hold a wooden Oxo lemon reamer, it feels as it might have felt to hold a neolithic tool – say a knife or a scraper that you yourself had fashioned out of a flake of flint 10,000 years ago at the mouth of your family cave. It fits just so into the palm of your hand, you angle it just so to attack the target flesh, you thrust it upwards and twist with a similarly brutish, venereal force, then withdraw it just so, dripping and pendant with glistening, shredded fiber.

This is why I suspect my wooden Oxo lemon reamer to be something a little more than a utilitarian hand tool. In addition to being an anomaly of quantum continuum mechanics, it is also a time machine capable of transporting the user to the very dawn of culinary history, not to mention to a distant, inchoate future when perhaps all food will be prepped and cooked by the power of focused imagination. Just as you cannot confidently locate the reamer in mechanical space, you cannot pin it with any certainty to one fixed moment on the temporal spectrum. Just as it exists everywhere and nowhere, it exists at all times and outside of time. Some might call such ambition in a utensil a design flaw, but as for me, the reamer is the one artefact I turn to when I wish to resurrect the Dream Time, when all cooking was an act of transcendent faith in the benevolence of the universe.

Make the simple syrup by combining 1 cup each of water, sugar and tightly packed spearmint or peppermint leaves. Heat to boiling until all the sugar has dissolved, allow to cool, strain and discard mint.

Combine all the remaining ingredients in a jug with ½ to ¾ cup of simple syrup, to taste. Reserve leftover syrup for the next batch of lemonade.