Have You Taught Your Kids the ABCs of the Kitchen?

We all want to teach our kids the ABCs, but when I step into the kitchen the ABCs take on a different meaning: Always Be Cleaning. Nina, my eldest one, reminded me this morning that it’s one of the first things I taught her about cooking. When we chop vegetables, we clean the counter right away. As soon as we measure out a spice, we return the jar to the cabinet. When we’re done with one pan, we wash it. And so on. In reality, this system often breaks down before the meal is finished, but what it means is that clean up is manageable at the end of the meal, and sometimes there’s nothing more to do than put a few things in the dishwasher.

We were talking about cleaning because Swiffer recently sent me a big green box of supplies, handily outfitted with its Wet Jet cleaning tool. The Wet Jet is a power mop that “traps and locks dirt so it doesn’t get pushed around.” I’m all for not getting pushed around, and the Wet Jet speeds up cleaning up by having a disposable pad. No need to worry about where the mop is drying out. That might sound like an absurd concern, but if you’ve ever tried living in a New York City apartment, you’ll understand.

Swiffer also supplied me with some handy statistics about dads today: 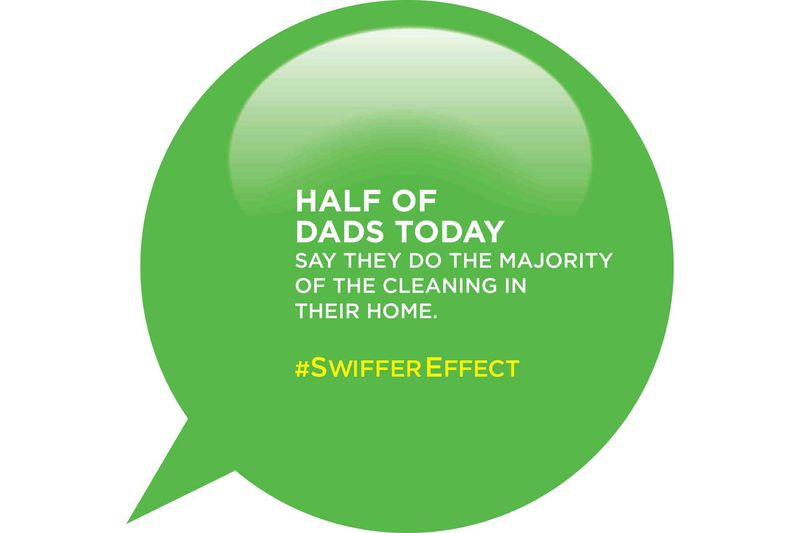 They also wanted me to share a video with Anthony Anderson and other dads talking about their experience cleaning. Pay attention to the dad at around the 58-second mark, who observes that everyone talks about a relationship being 50/50 but it’s more like 100/100. Truer words have never been spoken. Check out the video here. And here: