The Secret to the Perfect Steak 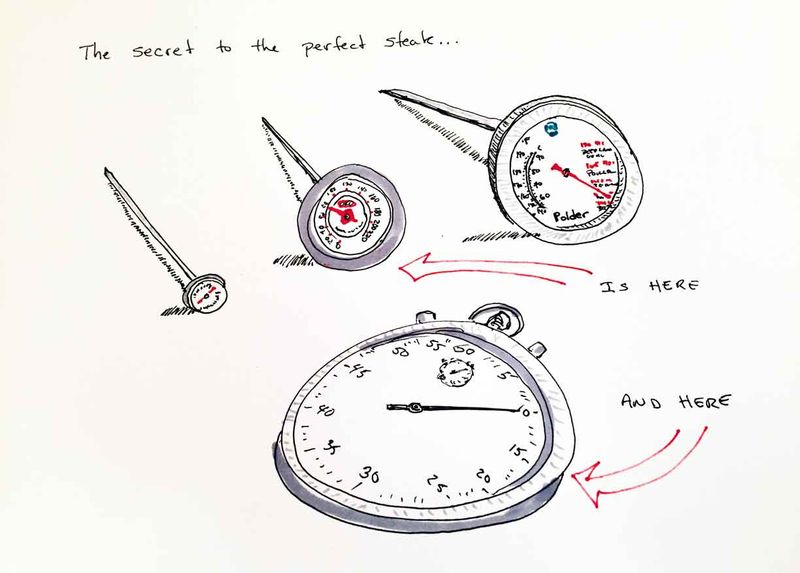 I can cook fish like it’s nobody’s business, thanks to spending much of my youth working in a fish market, but cooking steak at home, either on the stovetop or on a barbecue, has long bedeviled me. I never really knew what I was doing, and the results proved it. Sometimes my steak would come out raw. Other times, like shoe leather. It was guesswork, and I wasn’t guessing well.

But no more. After years of trial and error, I’ve finally found a method that I believe is foolproof. It has worked for me twice in the last couple of weeks. Of course, it can be foolhardy to come to strong conclusions after scant experimentation, but I am confident: the system is simple and it is data driven. All you need to do is get yourself an instant-read thermometer.

I can’t claim that I created this method on my own. I’m sure if I Googled it, I’d find others before me who have figured this out, and I probably read about it somewhere. But truly original ideas are few and far between, and it’s not so much the idea that matters, but rather its execution (ask a copyright lawyer about that). All you have to do is this (indoor method):

It helps to start with a good-quality steak (and that’s another reason this method is so good—you won’t risk ruining a pricey piece of meat). If your cut of meat has a thick edge of fat, salt your steaks and then sear that edge in the pan first (by moving it around on the hot metal like you are wiping the pan with it), which will properly grease the pan. If you like your meat more well done, just take it to a higher temperature. Be advised that this will make copious amounts of smoke, if you do it indoors. Outdoors, that's not a concern.

Finally, be sure to pick the right instant-read thermometer. Some of them are too small to read, and others don’t go as low as 125 degrees. Find one that works for you. Now if only they made instant-read thermometers for emotions. That could lead to all sorts of useful ways to get along with one’s spouse, one’s kids, and one's self.