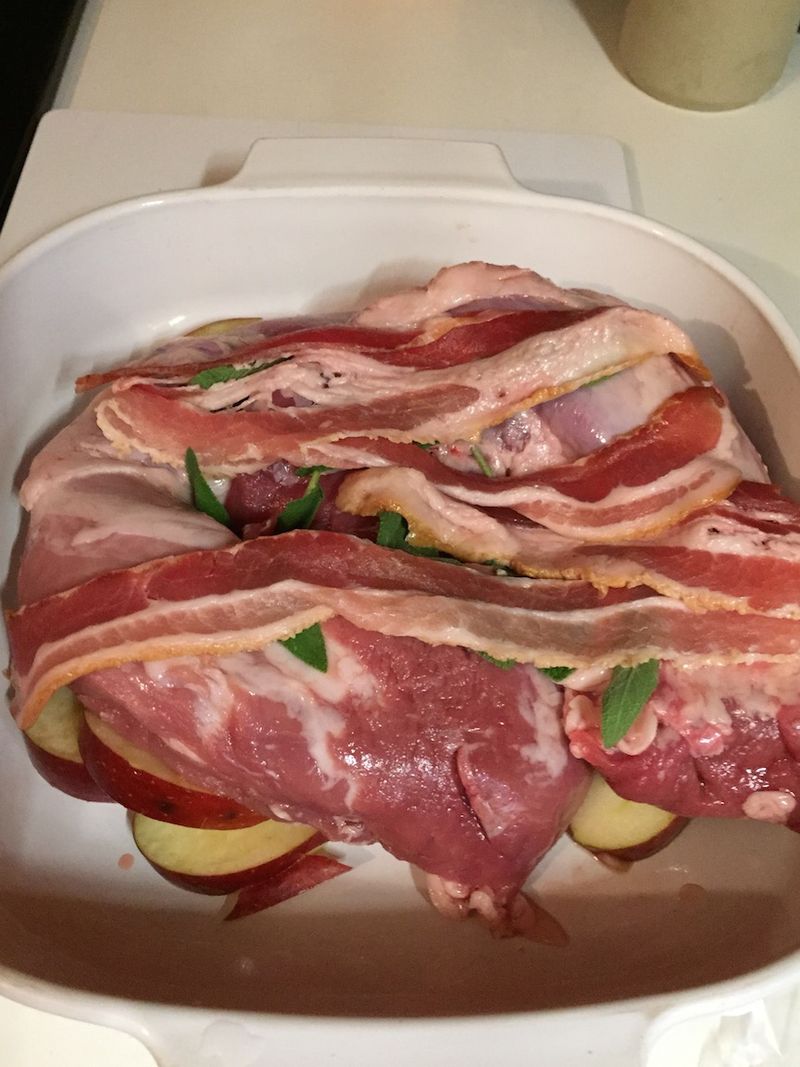 I’m just back from spending Christmas with Santa Maria’s parents, in central Pennsylvania. I’ve always felt fortunate to have met Santa Maria, and when I married her my world expanded in ways I couldn’t have imagined. Life with her has been like stepping into a kaleidoscope, and among the many moving and dizzying points of light are her parents. They are remarkable people whose eccentricity is outdone only by their generosity. Whenever I visit, I try to pay them back in what little way I can, mostly by cooking for them.

It was a bit of a lightning fast trip, given school and work schedules, and I had only three meals to prepare. The first was for Christmas Eve, and I wanted to do something easy, tasty, and festive. The pork roast that I usually make, with apples, sage, and white wine, would have been perfect, but I couldn’t get that piece of meat at the coop. I was set on doing something with pork because I planned on serving beef for Christmas Day (I’ll get to that in a subsequent post), and I didn’t want to do turkey or another bird. Fish was out of the question because I was going to be on the road. Running short of time in the coop, I grabbed two pork tenderloins and started thinking about how I might need to alter my recipe to accommodate the different cut of meat.

I love my roast-pork recipe because it creates its own sauce as it cooks. I stack the meat atop apples and sage and add a bit of wine. As the meat roasts, the fat atop the pork dribbles down into the pan, the apples soften, and the wine reduces. It’s as delicious as it is easy.

Pork tenderloin, however, is very lean, and the ones I get at my coop tend to be small, too (though I saw some purported pork tenderloins at a super market in PA that were the size of Norse yule logs, and probably just as savory, so watch where you get your meat). Given their small size and lack of fat, I knew they would need a little help to be proper holiday fare. So I topped them with slices of bacon, which didn’t exactly crisp up like the skin on a fresh ham, but did lend the sauce a smoky essence. Everybody loved it.

Slice the apples and lay them in the bottom of a roasting pan.
Layer a few leaves of sage over the apples.
Sprinkle the garlic slices amid the sage and apples.
Place the meat atop the apples, sage, and garlic.
Top with more slices of sage, and tuck some of the garlic in the folds of the meat.
Drape the three slices of bacon over the top of it all.
Pour the wine around the apples and meat.

Roast in the oven for 30-45 minutes, until the internal temperature of the thickest part of the pork is 145 degrees.

Remove meat to cutting board and tent with foil to keep warm.
Reduce sauce on stovetop slightly, mashing the apples into large pieces.*

Serve by slicing the meat and arranging it on a platter, with a bowl of sauce on the side. Diners can dress their meat to their liking.

*Note: in retrospect at this point in the recipe I would consider adding a few tablespoons of butter to th wine and apple mixture and reducing further to create a more traditional French-style sauce, but that’s your call.