Home Archives About
Block Island Carbonara
How To Store Basil? Summer is nearly over, and I can’t believe it. Before it comes to a close, I want to look back. And I want to spread the love--read on for details about a savory giveaway. We started summer on Memorial Day by meeting friends for a hike in the country. The weather was fine, the trail (after we found it) was scenic, and the company couldn’t have been better. It would have been a perfect day, but for one thing—we were late to the meeting point, and our friends were left waiting for an hour.

Our tardiness was due to a combination of things. That morning I was working on a blog post for this site (flank steak on the bbq!) and Santa Maria was baking her Divine Biscuits (yum!) for my mother and our little ones, Nina and Pinta. We’d budgeted an hour to get to the hike, but family life being family life, that wasn’t enough. Plus, I made a wrong turn on the way to the park, and we ended up driving about twenty-miles out of our way.

In the past, I’ve been a bit of a hot head when I’ve made a wrong turn, but I’ve matured somewhat, and I remained calm. This, I’ve discovered, has had the curious effect of making the rest of my life a lot easier. When I mess something up, I no longer panic, but I accept it, and fix it. I was doing my best to keep our detour to myself, but my kids in the back seat could sense that something wasn’t right. Harried inquisitions were jettisoned at the back of my head. In the passenger seat, Santa Maria caught on, and the emotional temperature inside our Chevrolet rose higher than that of the steel-forging blast furnace that built it. By the time we arrived, some of our friends were tense, too. If unspoken irritation could keep away mosquitos, we wouldn’t have needed any bug spray.

Fresh air and sunshine does wonders for city dwellers, however, and by the time we were a few miles into the woods, everything was back to normal. I could tell because the topic of conversation, as it often does among my friends, turned to food. I mentioned that I was working on developing a recipe for Kraft*, as part of its Tastmakers program, and that I wanted to use cheese in it. One of my friends, Paul Greenberg, rose to the challenge.

Paul is an insightful and talented writer (his first book, “Four Fish,” won a James Beard award) whose latest book, “American Catch: The Fight for Our Local Seafood” details how and why we export our best seafood and import all the dubious things that flood our markets. He’s also a dedicated home cook, and he tossed of ideas for blue-fish pâté (made with cream cheese), a list of avocado delights too numerous to mention, and tips for deconstructing a Feta-fueled Greek salad, to make a mouthwatering appetizer. I countered with ideas combining fresh tomatoes and cheese, variations on bruschetta, but nothing seemed quite right.

With the afternoon sun speckling our shoulders under the leafy expanse of Tallman State Park, Paul and I landed on an impressive construction of wasabi-cream cheese, cucumber, and smoked Sockeye salmon. I was filled with optimism as the day ended, and not just because I had a good idea for a recipe—spending time with friends is one of the most enjoyable things I can think of doing.

This is where cheese can come in handy. I love cheese because it’s easy to have around the house, and if you ever want to have friends over, you will always have something delicious to serve them. And here is your chance to entertain your friends. If you tell me in a comment below or via Twitter using #ForTheLoveOfCheese at @stayatstovedad what you love about cheese, you could win the following:

Cheese also has a history that I can relate to—do you think the first person to make cheese didn’t make a mistake when creating it? Just imagine how the ancients discovered how to turn milk into cheese in the first place. In “The Oxford Companion to Food,” Alan Davidson observes:

“Cheese is one of the oldest of made foods, dating back to the prehistoric beginnings of herding. As with all fermented products, it seems likely that the discovery of cheese was accidental. It could be that the curdling action of rennet was noticed when a herdsman poured milk into a pouch made of an animal’s stomach… Once any kind of cheese had been formed by chance, its owner would have observed not only that the taste was pleasant but that it kept well—always a problem with milk products—and even kept hard and dry.”

When I was back at home, I started working on the recipe. All the various concepts we had come up with when we were high in the mountains (involving rolling, stuffing, and slicing) failed to work down on the ground, and I was left with a cutting board of failure. Rather than wrestle with the laws of physics (as I mentioned above, I’ve learned long ago not to resist natural forces, and I’m not just talking about Santa Maria), I looked to simplify things—good advice under any circumstance. 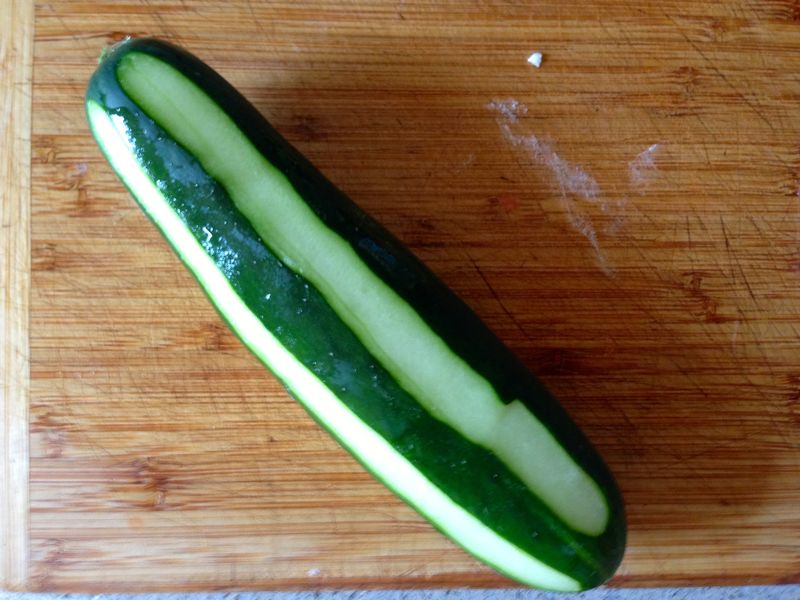 I peeled alternating strips off the cucumber to give it a festive look. 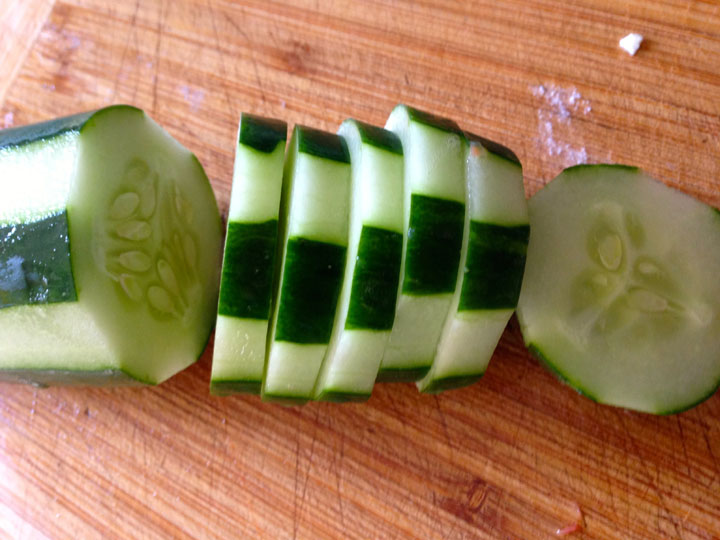 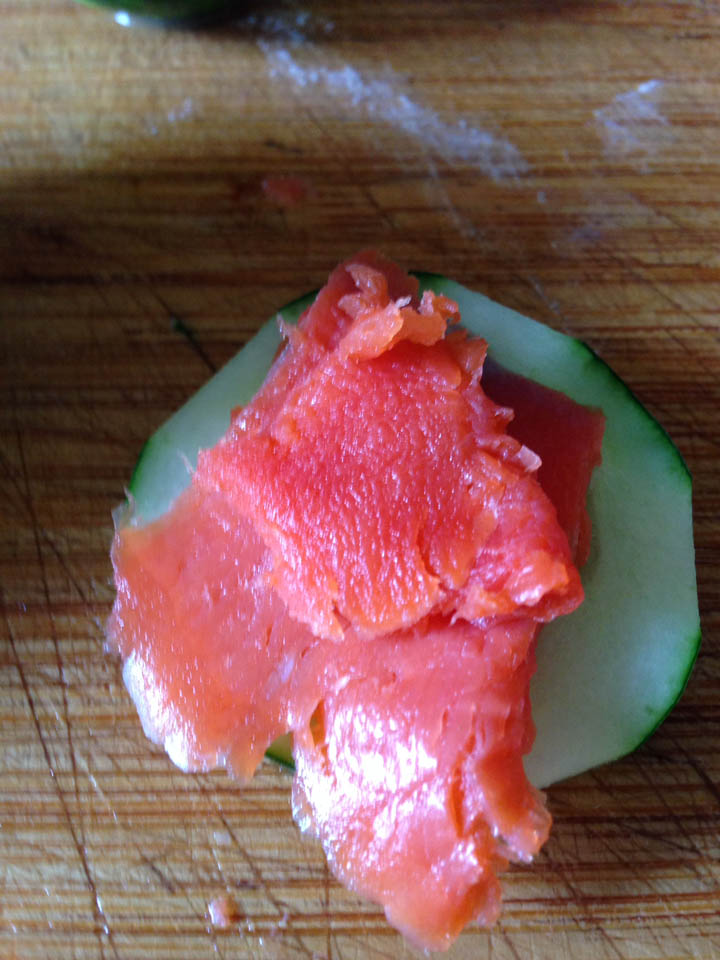 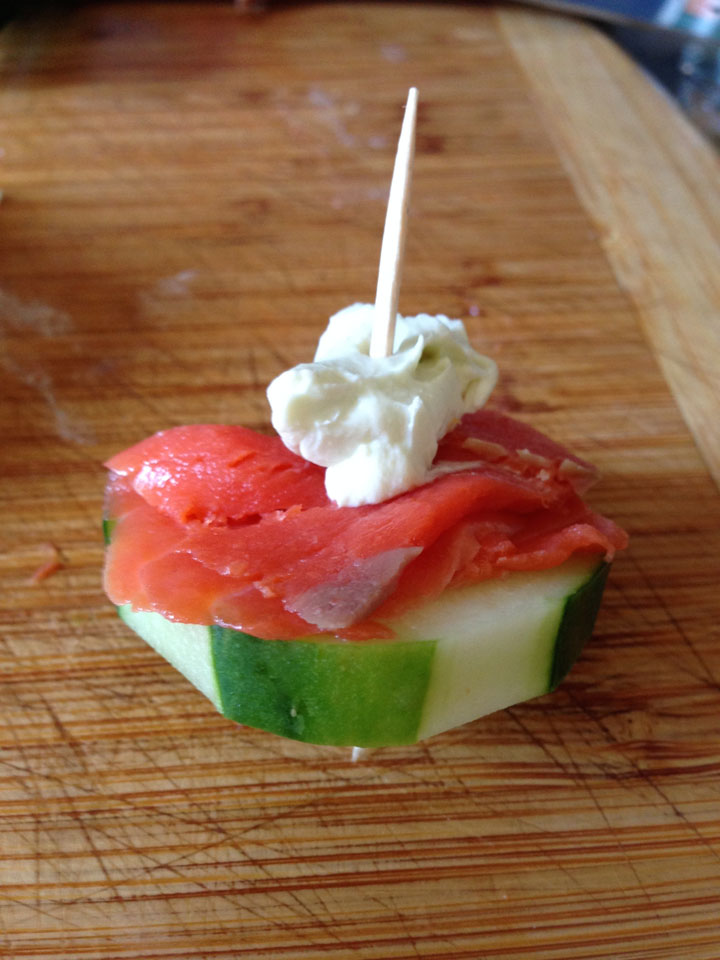 And finished it with wasabi-flavored Kraft Philadelphia Cream Cheese, held together with a toothpick.

The result was a quick, attractive, and delicious appetizer. The crunch of the cucumber is topped by the smoky richness of the salmon, and followed by the spicy smoothness of the wasabi cream cheese. I would serve these at any summer party. Santa Maria, for her part, said she liked them so much that she could eat them for breakfast with a pumpernickel bagel.  As I learned that day of the hike, it’s important not to give up after a small setback. The complete recipe can be found on the Kraft site. Enjoy!

*In case it wasn’t clear, this is a post under the paid Kraft Tastemaker’s program. All ideas and opinions are mine. Also, if you’ve read this far, you deserve a greater reward: If you visit www.ForTheLoveofCheese.com you can not only find more great recipes, but you can also enter for a chance to win a VIP Brad Paisley Concert experience for four and a lifetime supply of cheese (awarded in the form of a check for $8700)! NO PURCHASE NECESSARY.  Begins 5/5/14 and Ends 9/7/14.  To enter and for official rules, click here.