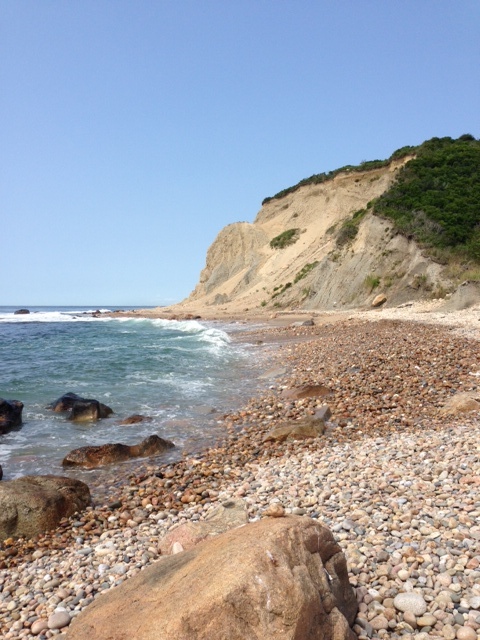 We are just back from an exhausting adventure on Block Island, a tiny teardrop-shaped spot land with an outsized role in my life. I had my first job in journalism there, some two decades ago, and I later proposed to Santa Maria on its slender northern tip, where the roiling waters of the North Atlantic meet the rapid currents of Block Island Sound. The ten-mile square island is a paradise of rolling fields, endless beaches, and natural beauty.

I’m fortunate to still have an old friend on the island, and we stayed in his converted barn and windmill. He introduced us to two friends of his, a couple with girls the same age as Nina and Pinta. One night, when we were at their house having cocktails, the hour grew late. By the time we left for home, we needed a quick dinner. Santa Maria and I had snacked on the fresh ceviche and hummus provided by our hosts, so we weren’t too hungry. Nina and Pinta, however, had eaten only chips and lemonade.

In cases like this, an easy default is to make breakfast for dinner. A couple of scrambled eggs later, and Nina and Pinta were off to bed. By this time, though, Santa Maria and I were hungry. Scrambled eggs might have been fine for our little ones, who were so tired after running around with their new friends that they could have gone to bed without eating anything, but I wanted something more.

Breakfast for dinner got me to thinking—I had bacon and eggs in the house, and I had pasta. Like the steady breeze of Block Island, a thought whipped its way into my head: carbonara. The classic egg and pasta dish was never something I liked, but I was willing to try it. I don’t know why. Maybe I wanted to do it for the same reason I kept dragging myself back to that wacky island. The promise of something good outweighed the effort required to experience it.

I mentioned carbonara to Santa Maria and she was thrilled. She had a recollection of having it in Rome once, and she loved it. I had no idea. My only experience with “carbonara” had been in a fraternity-house kitchen, where a friend would sometimes make himself dinner by boiling a pot of spaghetti and then throwing an egg in it.

I Googled the recipe, and came up with the Pioneer Woman’s take on it, which looked good enough to get me started. I fried up three pieces of bacon, sweated some onions, and tossed in a bit of garlic. I reserved the pasta water after I drained the cooked spaghetti, and I heeded her advice to combine the eggs and cheese very carefully, under a low heat. I tossed in a bit of baby spinach, to give mine a sharp and healthy counterpoint to the richness of the sauce, and I was rewarded by a delicious dinner. Santa Maria had her’s without the spinach, and she liked it so much that it was a highlight of the trip for her.

Put a large pot of water on to boil, for the pasta, and salt it heavily.

Start cooking the pasta as soon as the water boils.

In the meantime, fry the bacon in a large frying pan until crisp.

Set the bacon aside, and leave the bacon fat in the pan.

Sauté the onion in the bacon fat until it is soft and clear, about ten minutes.

While the onion is cooking, whisk the eggs in a bowl and add in the grated cheese and salt and pepper.

Once the pasta is cooked, drain it, being sure to reserve the liquid.

Once the onion is soft, add the garlic, and cook for a few minutes more, until fragrant.

Toss the pasta into the frying pan and slowly stir in the egg-and-cheese mixture.

Under a low heat, keep stirring the pasta-and-egg mixture as it cooks. The goal here is to make a creamy sauce, and to keep the eggs from scrambling. Add a few spoonfuls of the pasta water as needed.

While the egg-and-cheese mixture is cooking, toss in the spinach.

Continue to combine until the egg is cooked, a few minutes more.