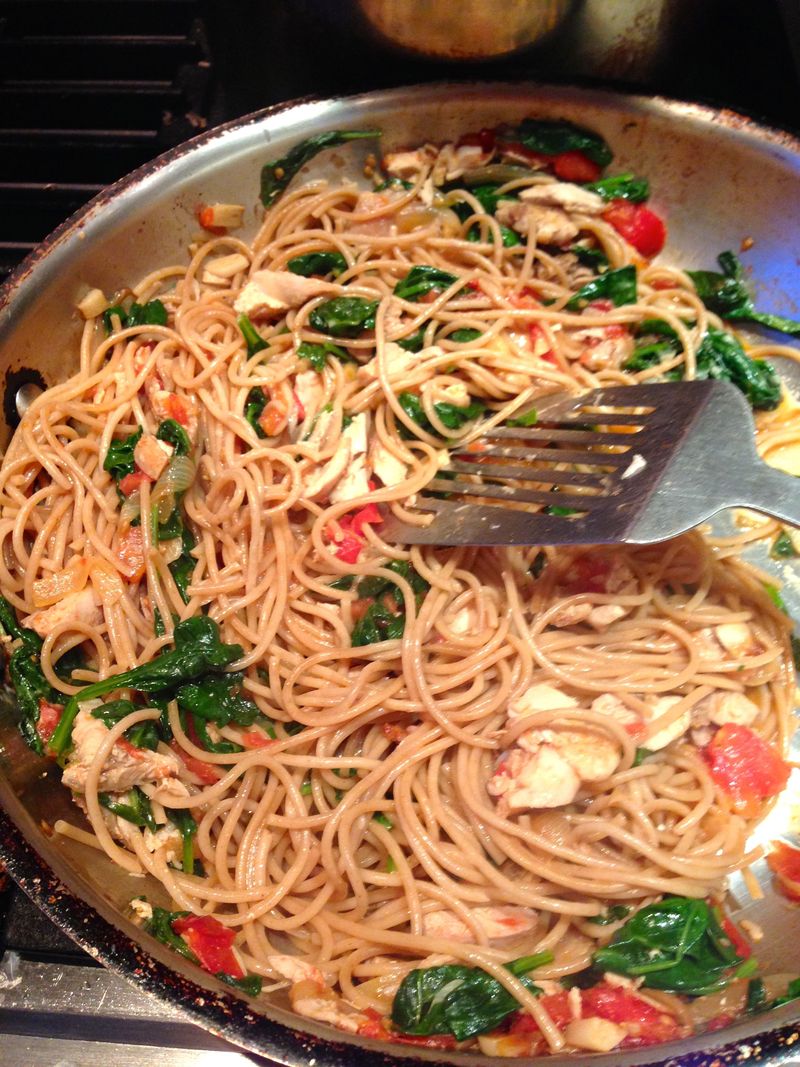 Growing up, I wasn’t allowed to watch much television, but I somehow managed to lose myself in  “The A-Team,” the the eighties adventure series. It turned Mr. T in to a celebrity, putting his face on lunch boxes (a key metric of popularity when I was young), but my favorite character was the team leader Colonel John “Hannibal” Smith. The best moment of the show came for me when he muttered, “I love it when a plan comes together.”  It was usually mayhem at that point in a given show, and he was having a great time with the chaos.

It was excellent training for parenting. Plans often go awry, but things still work out. The important thing, is to have a plan. Last Tuesday, I came home from work a bit late, and needed dinner. Santa Maria, who got out of work earlier than I did, had fed the kids black beans, but I had eaten those for lunch recently, and wasn’t in the mood for them.

I had an overripe tomato, a tired bag of spinach, and a pack of chicken thighs that all needed cooking. What could I do with those, I wondered. I needed something fast, so a pasta came to mind. It’s easy to make a sauce in a pan by reserving the past-cooking water, so I was confident I could come up with something. There was just one catch—the kids were not yet in bed.

Bedtime is nothing like it was when the kids were young. We have a routine, and it’s mostly easy. But it takes time. Toothbrushing, hair combing, face-washing, book reading, etc. I needed to make dinner, but I wanted to be with the kids.

So I broke down the recipe into stages that I could stop at will. 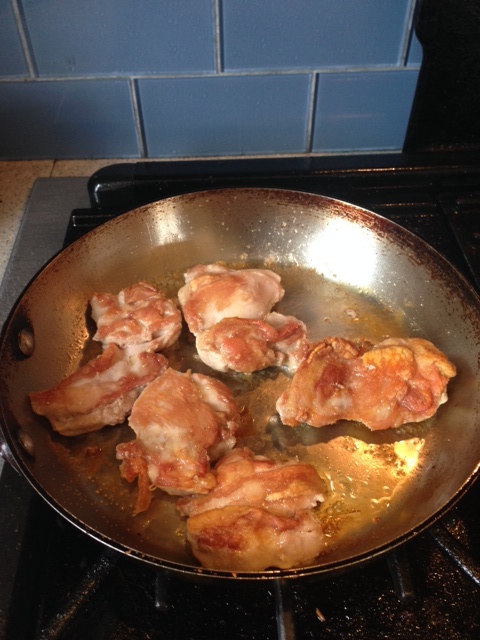 I sautéd the chicken thighs in a bit of oil until they were very brown.

I set them aside and checked on the kids. 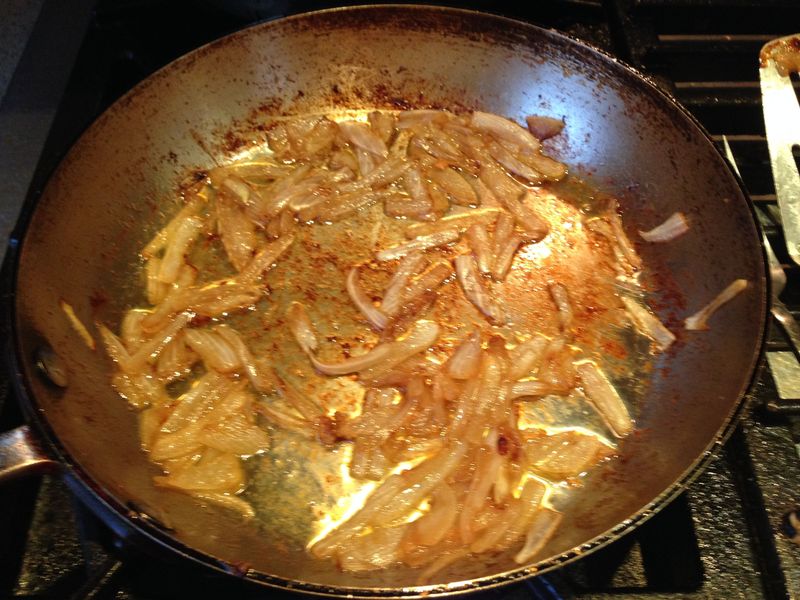 I sliced an onion in sautéd it in the chicken fat.

While the onions were sweating, I made sure teeth were getting brushed. 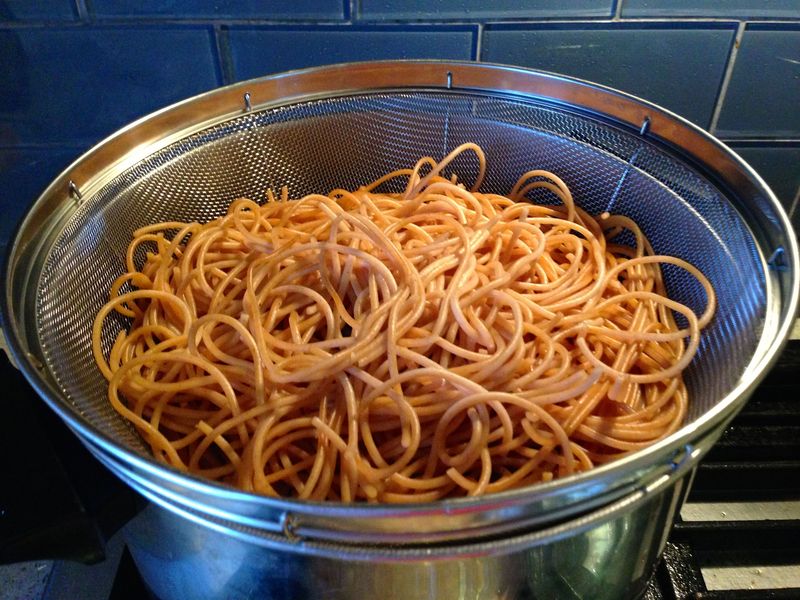 I put on a big pot of water and made pasta.

I ran to get the kids washcloths for their faces, and ironed out a squabble over sharing the batthrom. 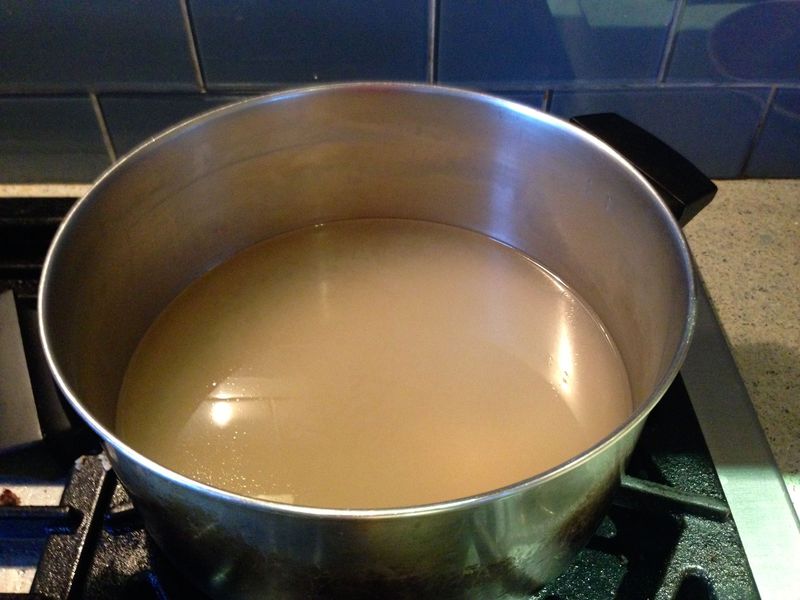 And when was done, I reserved its cooking liquid for later.

I made sure the kids were brushing their hair, and sorted out some squabbles over sharing the bedroom. 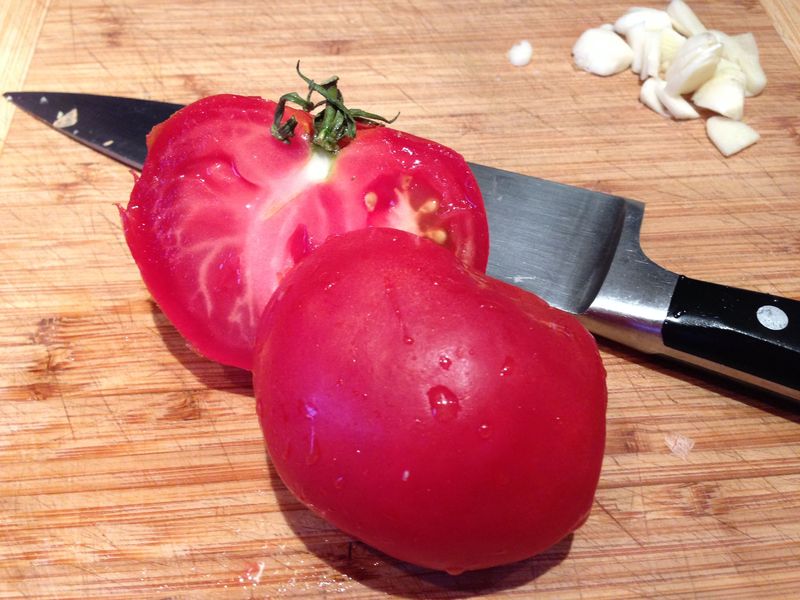 I diced a bit of garlic, and cut up that over-ripe tomato, and set them aside until I was ready for them.

I went and check on the kids again, to make sure they getting dressed for bed.

The spinach was pre-washed, so there was nothing to do with it. I chopped the tomato, cut up the cooked chicken, and then I turned everything off.

I went to tuck in the kids.

Everything was going to plan. It was perfection.

I returned to the kitchen to assemble the final dish, heating the onions. Tossing in the tomatoes. Then adding the garlic, spinach, pasta, pasta water, and Parmigiano-Reggiano. Santa Maria was just kissing everyone goodnight. Dinner was moments away. It was all coming together wonderfully.

Then boom—something went awry. There were tears. There were howls. Someone was upset, and dare we say overtired (and I’m not just talking about myself). There were words between Santa Maria and myself. Dinner would have to wait. Appetites were fading. The dish sat on the stove. And sat.

After everyone settled down, we ate. And it was delicious. A quick, flavor-rich sauce. A one pot-wonder of spinach, tomato, and chicken. I have to say it was the Parmigiano-Reggiano that brought it all together. Roll Credits.

Put a pot of water on for the pasta.

Cook the pasta, reserving the water

Sauté the chicken thighs in a bit of oil until fiercely brown.

Remove and set a side.

Sauté the onion in the chicken fat, slowly, until golden brown.

Add the tomatoes, cook until they collapse; a few minutes.

Add the garlic, cook a minute.

Add the chopped chicken, cooked pasta, and a few spoonfuls of the reserved pasta water to create a bit of sauce.

Serves two to four, depending.