Home Archives About
How Many People Does it Take to Grill Flank Steak?
Father’s Day Prep: Some Uncommon Goods and A Mystery Solved

Making Mirepoix and Finding the Truth 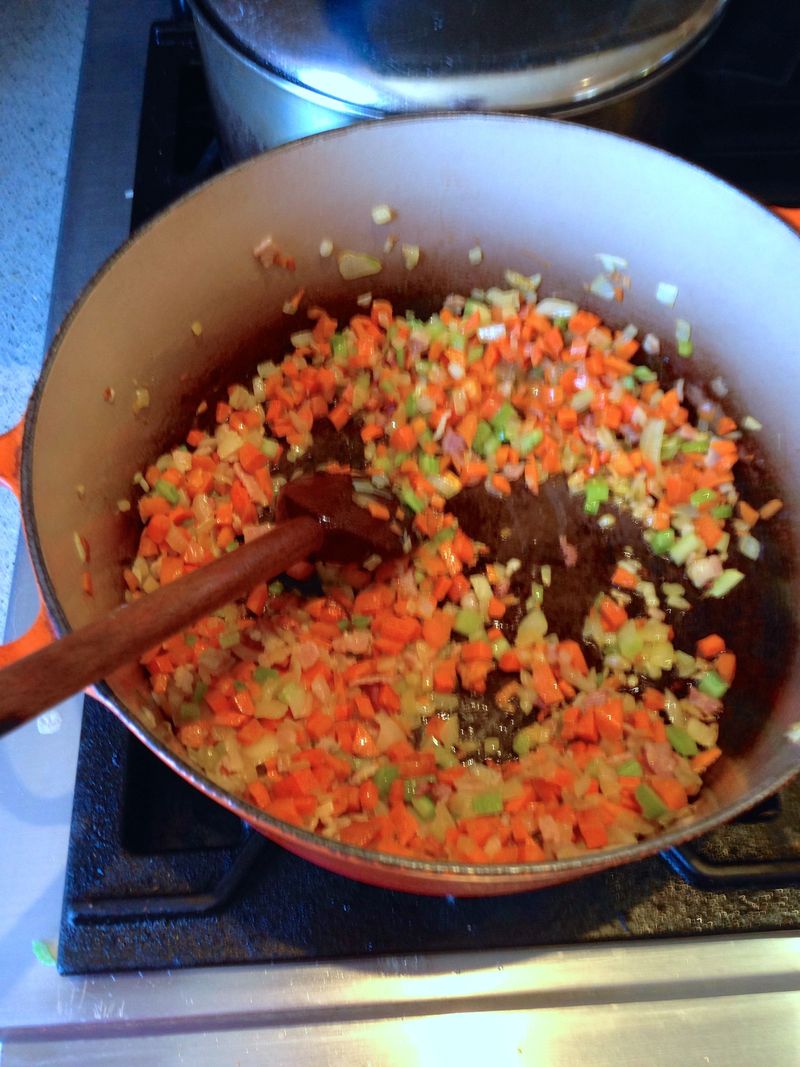 When I was cooking this morning, I started to think about Nietzsche, who, in “On Truth and Lies in a Nonmoral Sense,” said:

What then is truth? A movable host of metaphors, metonyms, and; anthropomorphisms: in short, a sum of human relations which have been poetically and rhetorically intensified, transferred, and embellished, and which, after long usage, seem to a people to be fixed, canonical, and binding. Truths are illusions which we have forgotten are illusions- they are metaphors that have become worn out and have been drained of sensuous force, coins which have lost their embossing and are now considered as metal and no longer as coins.

His approach has been commonly explained by using the metaphor of an onion: peel long enough at the layers of language and nothing remains. I was making mirepoix, and though I had no trouble with my onions, when I started to read about mirepoix, I became lost. Before I get to that, however, let me explain the basics of a mirepoix.

Mirepoix is a flavor base made with onions, carrots, and celery. I use it in countless recipes. This morning, I had added bacon to it, for my Bolognese sauce. It’s the base for my chili, my chicken soup, and any number of stews, including my experiments with wild boar and lentils.

The traditional ratio for a mirepoix is two parts onion, one part carrot, and one part celery. I make mine a bit heavier on the carrot and lighter on the celery, but that’s just my preference. Learn to cook for yourself, and you can change things according to your tastes.

A mirepoix makes use of aromatics, which are various herbs, plants, and spices that impart flavors. Once you start looking at mirepoix on this level, things start to get complex. Michael Ruhlman explains aromatics in this post of his.

According to “Larousse Gastronomique” (by way of the Internet), the term “Mirepoix” dates to the 18th century, and comes from “the cook of the Duc de Levis-Mirepoix, a French field marshal and ambassador of Louis XV.” However old the term “Mirepoix” may be, it’s most likely, though that the cooking technique is even older. The combination shows up all over the world.

The Italians, the Spanish, and countless other cuisines have a similar combination. According to Harold McGee’s “On Food and Cooking: The Science and Lore of the Kitchen,” the Italians call it “soffrito, the Spanish “sofregit,” and the Cajuns (with a slight variation of substituting carrots by green capsicums) call it the Trinity. However, “The New Food Lover’s Companion,” has the Spanish making “sofrito” and Marcella Hazan has the Italians making “soffritto.” It’s enough to make one go as mad as Nietzsche.

But all is not lost. In “The Flavor Thesaurus: A Compendium of Pairings, Recipes and Ideas for the Creative Cook, Niki Segnit sums up the appeal of the mirepoix perfectly: “Dice carrot, celery, and onion and you have the aromatic base for many stocks, soups and stews known by chefs as mirepoix. Add some salty bacon or cured fat for a mirepoix au gras and it’s a bit like being dealt three of the same-numbered cards in a hand of poker. You’d be unlucky not to end up with something winning.” If you are looking for the truth, there it is.