Home Archives About
What's Margarine Doing in My Refrigerator? A Vegan Cupcake Recipe
The Biology of Baking: Strawberry-Rhubarb Pie It feels like just yesterday that I was pushing my girls in a stroller on the weekends, and now I can’t catch them while playing tag in the park. Before I know it, they will be out of the house—in college, out on their own, off to seek adventure—and I will be back to cooking just for Santa Maria and myself. I know that my time in the kitchen is limited.

On the other hand…

It also feels, on some days, that I’ll never get out of the kitchen: Breakfast, lunch, dinner—they all add up. I know I’m not alone in feeling this. Santa Maria often reminds me that she’s the one putting dinner on the table the nights I’m working late. And I met a fellow over the weekend with two kids and who works from home. He makes the breakfasts and dinners and he said to me, “My wife told me she has no life. We have no life,” referring to how much time they spend tending to domestic tasks.

And in the meantime…

My children are doing more and more in the kitchen. Just tonight, Nina made up her own way of chopping tomatoes. She prefers to do that rather than set the table (the acorn doesn’t fall far from the tree). For her part, Pinta, my little one, has created a new way to eat pancakes.

Pancakes are a weekend treat around our house. I make them from scratch, and once you’ve done this a few times, you’ll find it’s as easy as opening a box of mix. I used to separate and beat the egg whites, to make them supper fluffy, but as I’ve gotten older, wiser, and more tired, I’ve started cutting back. I’ve learned an easier way to make them.

The trick is to do less, not more. This is also useful when discussing problematic issues with one’s spouse. Take it easy. Don’t mix the batter too much. Let it sit, full of lumps. Just as time heals all wounds, if you let the batter rest about ten minutes or twenty, it will turn out much better. And if you take a break when talking over hard issues with your spouse, it can be much more productive to return to them later, after everyone has cooled down.

These days, I thin the batter with extra milk, and make giant, crepe-like pancakes. I do this by putting a spoonful of batter in the middle of the hot, buttered, frying pan, and then tipping the pan back and forth so the batter spreads out in a circular fashion as much as it can. 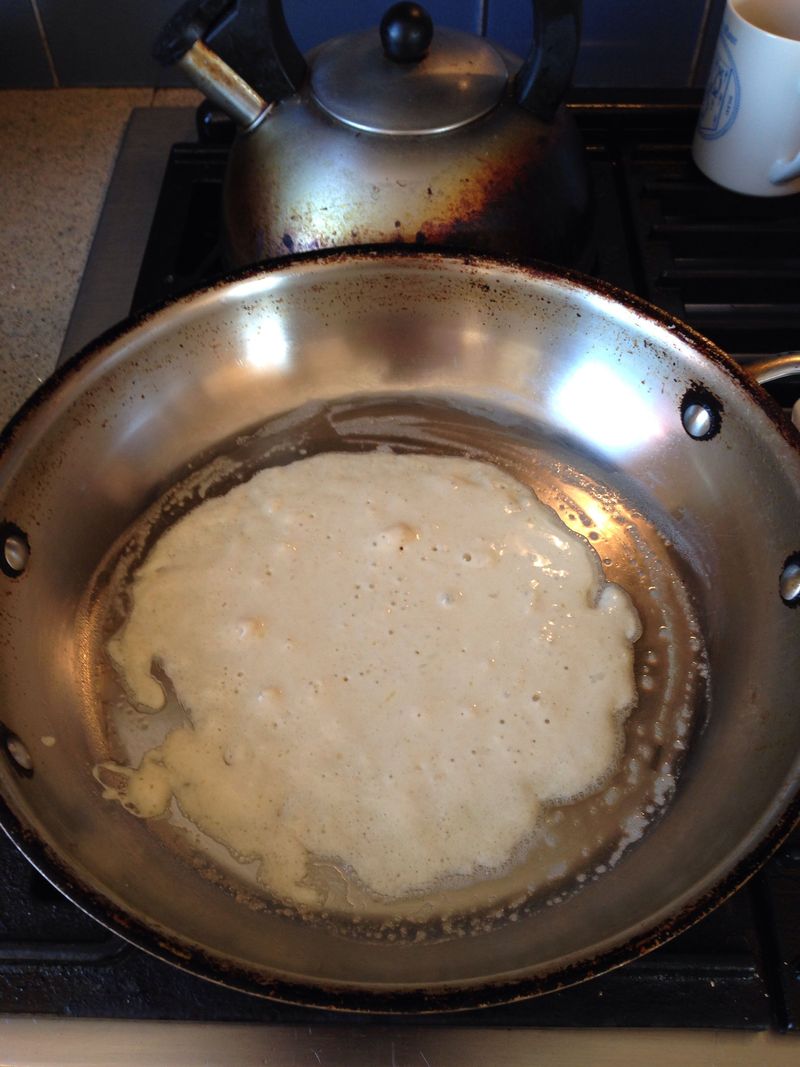 Once it is spread out, I flip it and cook it like a normal pancake: 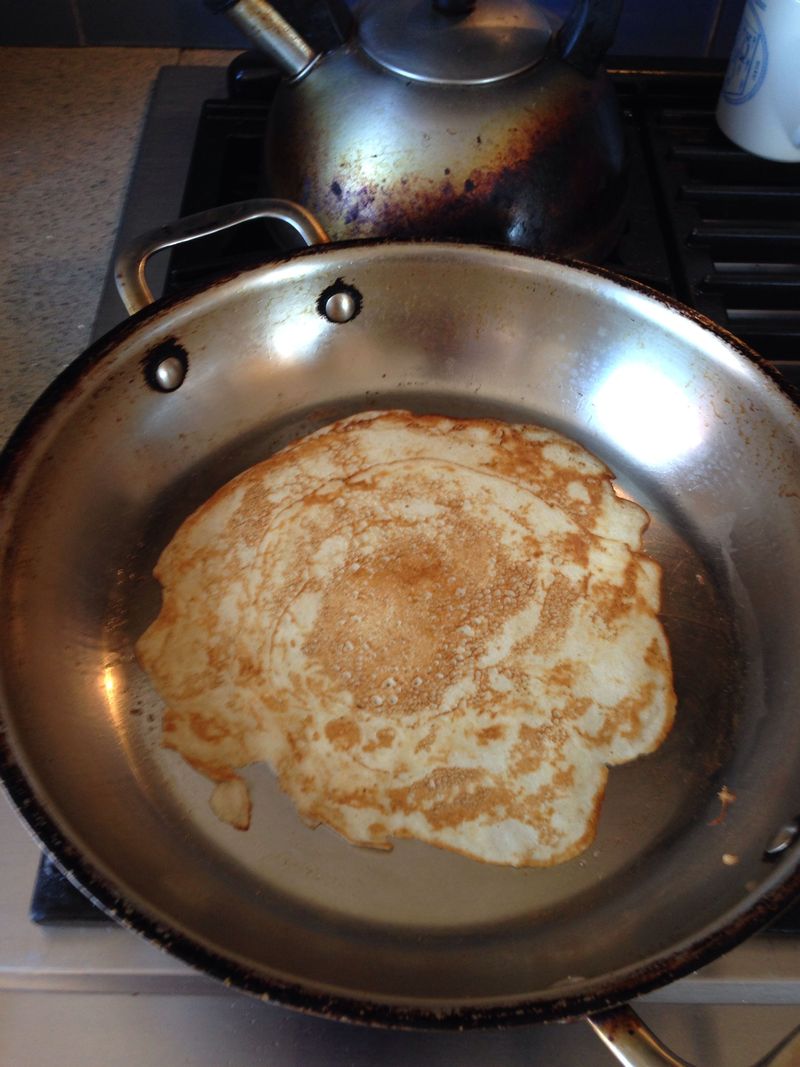 Nina and Pinta eat their pan-crepes with cinnamon sugar, and Pinta has taken to rolling hers up and then cutting it crossways, and making wee Rugelach-like bites. This is the fun part of cooking for yourself and the family, seeing how they enoy the food. It makes all the time in the kitchen worthwhile.

Combine the dry ingredients with a fork, and mix well
Combine the eggs, the milk, and the butter.
Mix the wet ingredients into the dry, and stir with spoon until combined, but not too much. It’s fine to leave lumps. Let sit ten to twenty minutes if possible (but not absolutely necessary).

Look at the batter. If it is thick, thin it out a bit with some extra milk. I don’t have a hard and fast rule for this.

Once the batter is thin and runny, spoon a bit into a large, hot and buttered frying pan, and tip the pan back and forth (being careful not to burn yourself) until the batter covers as much as the pan as possible.

As soon as bubbles start to appear, flip and cook through on the other side.

Serve with warm maple syrup or cinnamon sugar, as you please.