How Many People Does it Take to Grill Flank Steak?

The good news for my family is that I'm better at barbecuing than I am at fixing cars. Once, when I was a boy, I tried to check the oil on my mother’s Chevrolet Chevette, the sorriest excuse for a subcompact every invented. I managed to get the dipstick out, but I couldn’t get it back in. My parents had to call a mechanic friend to come over and fix it, and I felt ridiculous.

The Chevette is long gone but yesterday, I was back where it was once parked, standing in my mother’s driveway, grilling flank steak for her, my family, and my brother’s extended family. It was an afternoon of bike riding, baseball, and conversation. My brother and his wife have a four year old and an almost one year old. I remember those days of exhaustion well (the time of "Fly Sky High Kale Salad), and it was a treat to see them.

Cara Nicoletti's recent post on Food52 inspired my choice of flank steak. Despite the article's suggestions, my butcher had never heard of a Jaccard knife, but it didn’t seem to need any more tenderizing. I even skipped the marinate after reading this Serious Eats article, and just salted it heavily before cooking. 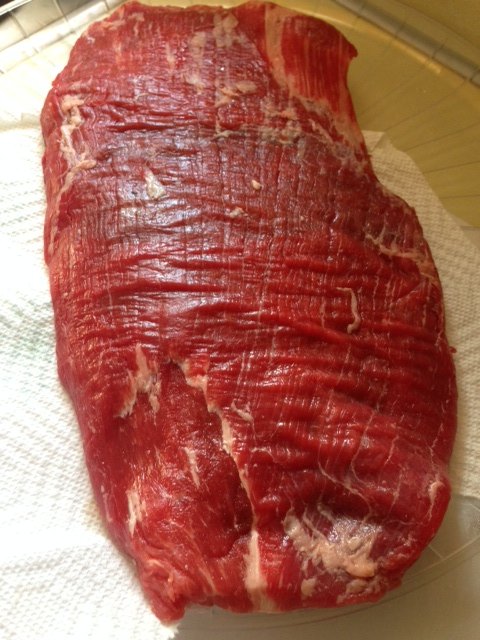 I let it sit out about a half hour before cooking, to bring it up to room temperature. Note the grain on this photo. It is easy to see on a flank steak, and when you cut to serve it, you want to be certain to cut across the grain. “On the bias,” as my mother said, to which the women at the table replied “That’s a flattering cut.” I had no idea what they were talking about, but I’m used to feeling that way around women.

I lit the charcoals with a chimney starter. If you don’t know how to use one, this YouTube video explains it well. If your dining partners start giving you advice on how to proceed, you can refer them to it. 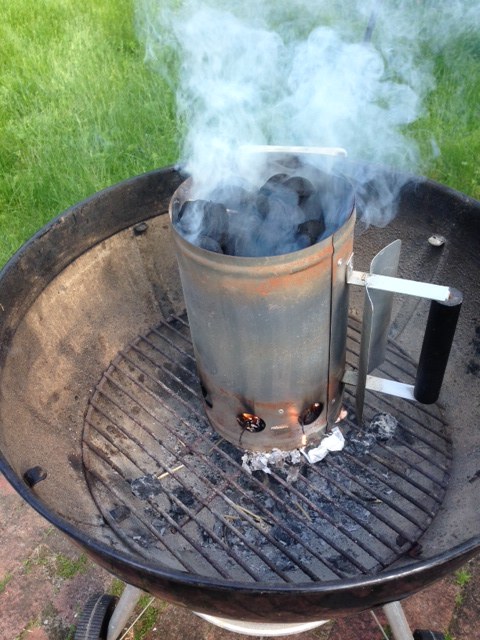 Once the starter has done its job, I dumped the hot coals out onto the grate and then added more coals to get a super-hot fire. After they ashes over, I grilled the meat.

I did it three minutes on the first side, and then two on the second. Flank steak cooks quickly, and it has to be watched carefully. An overcooked flank steak will taste about as good as a radial tire off an old Chevette.

Your best friend when cooking meat is an instant-read meat thermometer, and I used one yesterday. I wanted the meat to get to 125 degrees for rare. I did that and then let the meat sit for about five minutes before cutting it up, across the grain. A few of the thicker pieces were too rare, and I had to throw them back on the grill to get them cooked properly, but no professionals had to be called in and the evening was a huge success. 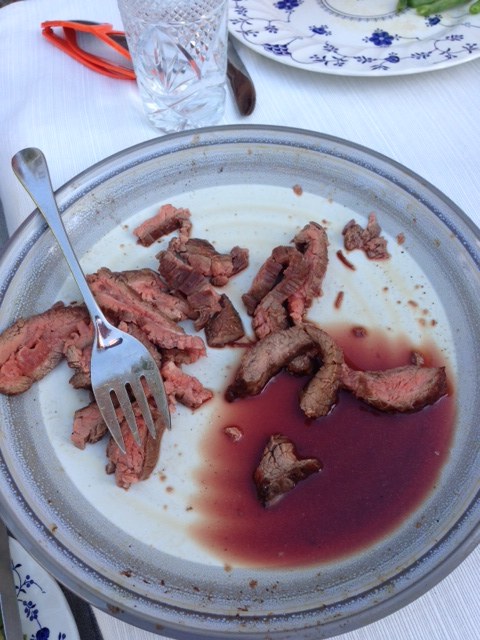 Chop the parsley as fine as possible.

Combine with the other ingredients, and let sit while you cook the steaks.