Home Archives About
In Praise of the Braise: A Rendezvous with Jamie Oliver's Beef Stew
Holy Guacamole! Kids Save Me in the Kitchen

Pork Tacos at the Messy Easel

Here’s a bad joke: Why do children like to microwave food? Because they’re good at pushing buttons. I think you know what I’m saying, but I’m going to spare you the details, for three reasons:

I will belabor one thing, though, and only because it must be universal among parents: the feeling that if one’s children are not behaving well, the main reason is that they learned those nasty habits from you. That is the hardest part about dealing the rough patches of parenting. Children are giant walking billboards for the parents' worst habits.

Facing that has led me to change my life. Without getting all Norman Vincent Pearle on this topic (believe me, I’m in no danger of that), I have become aware recently of a body of work that says—and I’ll paraphrase here—that if you focus on the good things in your life, you’ll feel better. (For more details, see here, here, here, and here.)

So, in the hopes of increasing the collective happiness, I’m going to relate a story, and doing so, refine one my latest go-to-recipes. The other weekend we had a busy soccer schedule and I was running back and forth between my house and downtown brooklyn more often than the rush-hour F train. I actually like this, because it gives me one-on-one time with each of my girls, but the schedule can become a a problem if the games interfere with making dinner.

Two weekends ago Pinta’s game was late in the afternoon, and I was worried. But, Santa Maria stepped up to the stove, with amazingly inventive assistance from Nina, and saved the day. I had put pork tacos on the menu, and Santa Maria and Nina did them with style. When we returned, I found the following sign on the door: 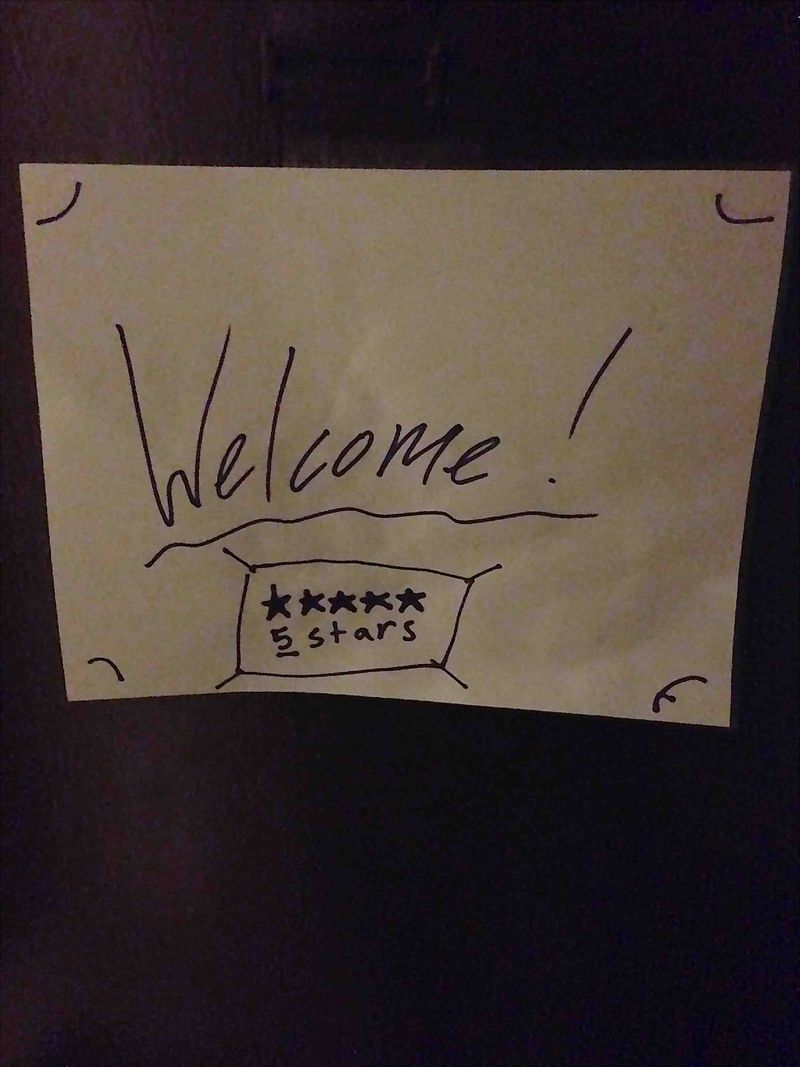 When I entered, Nina, who was wearing an apron and a smile, said to me, “Welcome to the Messy Easel.” She had turned the apartment into a restaurant. She took my coat like a proper hostess, and handed me a menu: 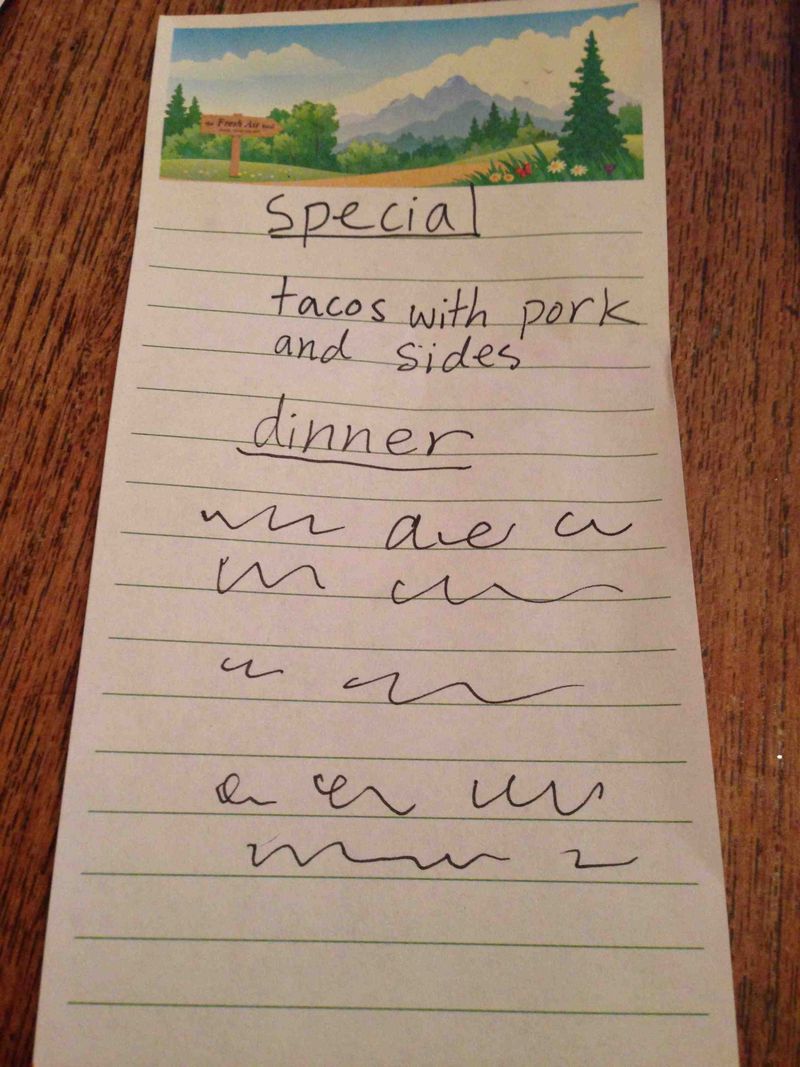 The table was perfectly set, the tacos were delicious (see note, below), and we had a fantastic dinner. I asked Nina how she came up with the name of the eatery, and she pointed to the corner of our dining room, where, in fact, we have a messy easel. It was better than eating at an actual restaurant, and when the meal was done, I was handed a check, that I was able to pay with a signature. 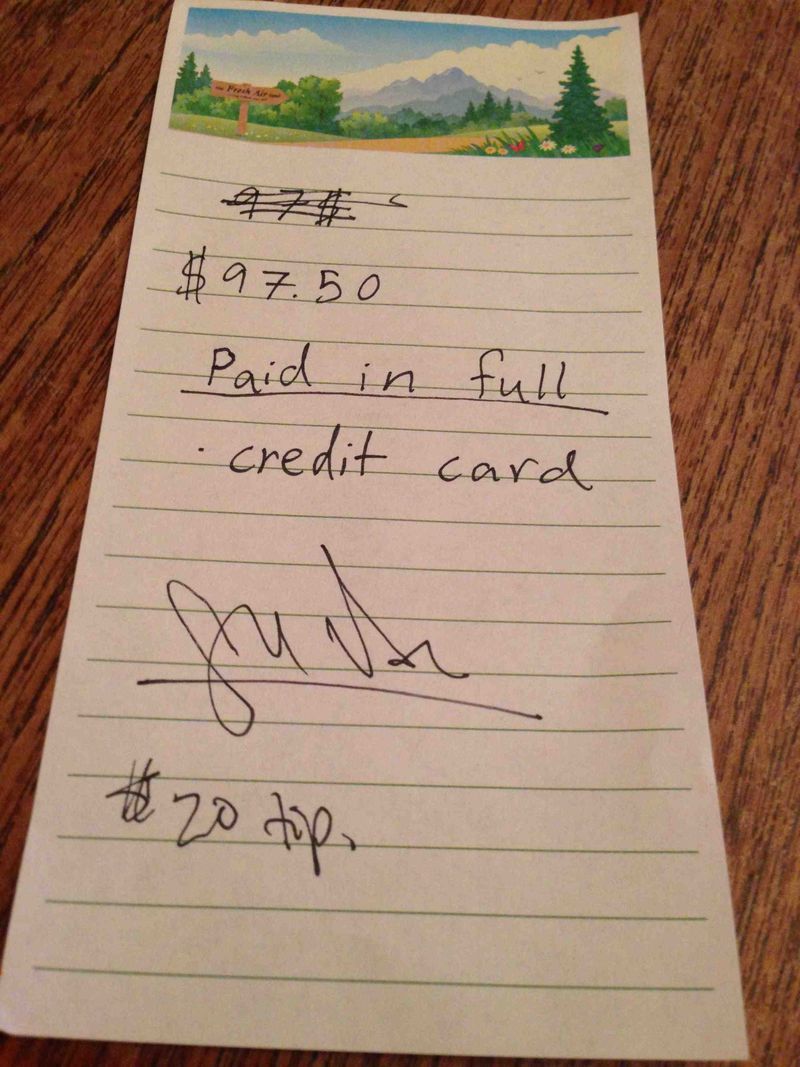 Note: Here’s the recipe for the pork tacos, and after consulting with Santa Maria, I’ve refined it slightly. It can take a bit longer to cook than I had previously mentioned, and I added a step to create a more of a sauce. Here’s the updated recipe (and I’ve corrected the original post to reflect these changes).

Combine all the spices and the oil.

Place the meat in a low baking dish and rub the mixture on the meat, covering all sides.

Pour the wine around the meat.

Roast in oven until internal temperature of meat is 145 degrees, about 20-30 minutes.

Remove the meat from the oven and let it sit for about five minutes.

Thinly slice the meat and chop it a bit until it resembles shredded pork.

Pour pan drippings over the meat, and serve with fresh salsa, guacamole, and warmed corn tortillas.