In Praise of the Braise: A Rendezvous with Jamie Oliver's Beef Stew 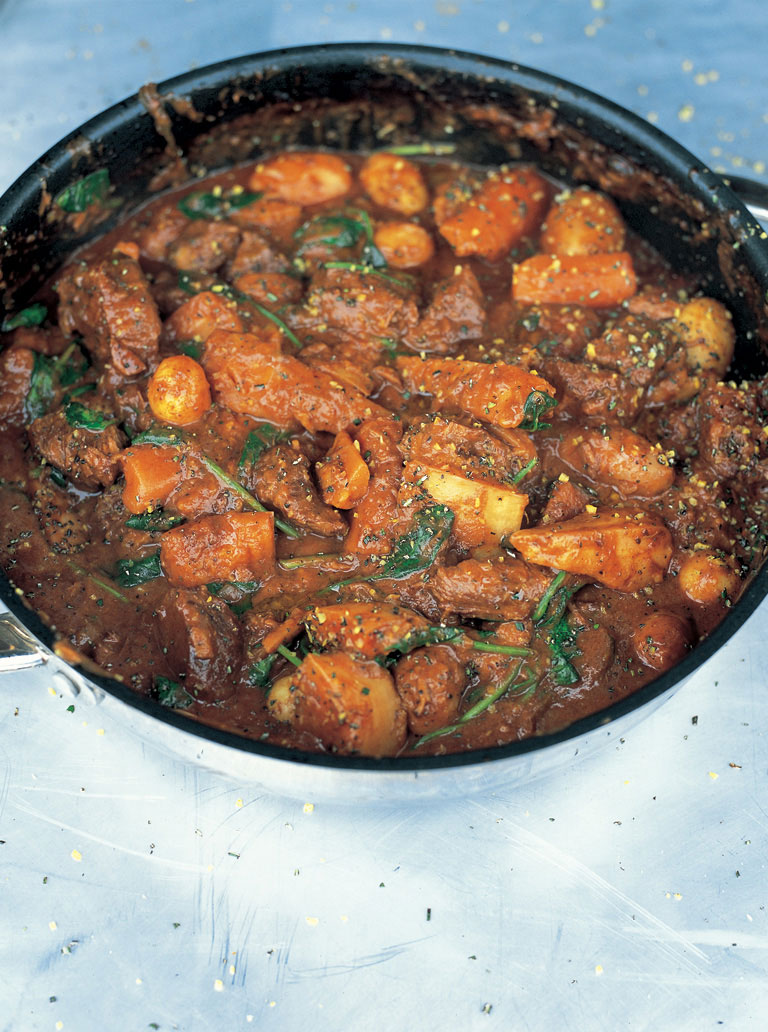 Over the past few months, Santa Maria has cooking up an entertainment bonanza. While I handled the day-to-day meals, she constructed remarkable weekend dinner-party extravaganzas. In early November, she feted a friend and her new boyfriend with an arugula salad with sunflower seeds, a marvelous cremini-mushroom, béchamel lasagna, and pavlova. Later that month, she made butternut-squash soup with pomegranate seeds, homemade chicken-pot pie, and chocolate pots de creme for a party of old and new friends. In December, she spent two days preparing a coconut chicken curry for old confidants who we never get to see. At the end of the month, she whipped up roast chicken and pasta pasta all'amatriciana for out-of-town visitors.

She handled all the planning, shopping, cooking, and serving, and I was as much of a guest as everyone else. They were delightfully relaxing evenings that restored a needed balance to our social lives. She was on quite a roll, and we were set to have eight friends over on Saturday night when our busy lives caught up with us. Just this month, Santa Maria’s work increased, and there was no time in her schedule to do the cooking.

I saw this, and stepped in to help with the meal she was planning, a beef stew. The recipe came from Jamie Oliver, and though it was the first time we were making it, we knew it was great. Just the week before we were at a friend’s house, where she served the dish. Her version was elegant and she brought it to the table topped with steamed green beans. My version was a bit more rustic (there were no decent green beans to be found), but no less delicious.

I was as busy as usual, and though the recipe was described as “easy” on Oliver’s website,  I was a bit daunted. We were doubling it to feed all eight friends, and the very things that made the stew so remarkable were the same things that were giving me anxiety. It’s no ordinary beef stew, you see, but one with Jerusalem artichokes, onions, parsnips, carrots, and butternut squash. Those vegetables soften and combine to make an unusual flavor. But before they can do that, they needed to be peeled and chopped.

I was not thrilled about all the work that needed to be done, but came up with a time-tested solution. I broke the task of making the stew down into small and manageable pieces. I did the chopping Friday morning before going to work, and felt a sense of relaxation knowing that I was halfway done with the cooking.

Saturday morning, I combined the ingredients the way Olivier suggested, and I understood why everyone said the recipe was easy. There was no browning of the meat, and all that needed to be done was—more or less-to throw everything in a pot, cover it, and let it cook in a hot oven for three to four hours, or until the meat was tender. That’s all there was to it.

This was my first time braising something in the oven, and I have to say it can’t be beat. I’ve done plenty of braises on the stovetop, but they always require stirring and care to make sure the bottom of the pot is not sticking. In the oven, there’s no such concern. My only caveat is to suggest that you make sure the top of your pot is tight fitting. Other than that, there’s nothing to worry about. Just sit back and enjoy the way the stew will perfume the house.

In all fairness to Jamie Oliver, I can’t post the recipe here. I did nothing to adapt it, other than convert a few of the metric measurements to U.S. units. Just follow his directions, and you can’t go wrong. Pay close attention to his note about the lemon zest and rosemary at the end. It does make a world of difference. Here’s a link to the recipe.