Home Archives About
Alaska Salmon Chowder
How is a Standing Rib Roast like Stone Soup? 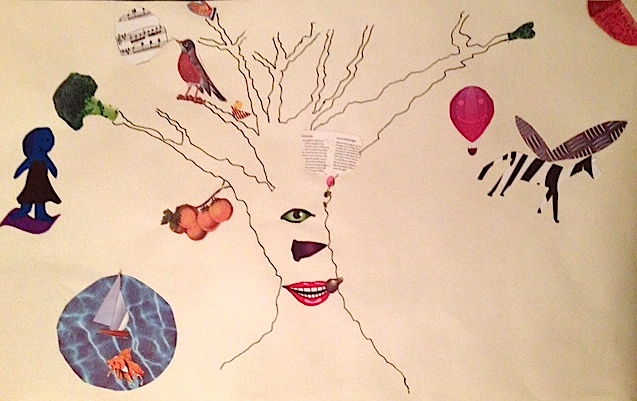 I had a great Christmas at the stove. We hosted fifteen family members on the big day, and I made a standing rib roast. I was getting ready to tell you all about it when two things happened. First, I was hit by the flu, and my legs feel like I've run twenty miles without stretching or sipping water, and my fever is up there in bad-defense basketeball territory. The second is that my blogging friend Paul Kidwell, a Man with a Pan who has contributed to this blog before , dropped me a line and offered me a guest post. I took him up on it right away, then I reached for the Advil and rolled over (BTW, the above image, courtesy of Pinta, represents how my innards feel).

Christmas and New Year is my favorite time of year and my mother's DNA that I inherited makes me built for the holidays. She taught her three boys to "never return a dish empty" and through her influence, I was blessed with the Santa gene in extremis. In my world, giving is receiving and despite the cliche, I find great pleasure in giving presents - be they store bought or kitchen made - during the holidays. of course, if you want to return the favor and give me something; good luck. I have lived long enough to accumulate a wealth of everything.

I am not a gadget guy, nor do I get weak in the knees in anticipation of the newest version of the iPhone, iPad, or anything that begins with the letter "i." I have earlier versions of each and am quite content with their performance. Also, I have enough sweaters to keep a small village warm and the entire Brooks Brothers bow tie collection hangs peacefully in my closet, so adding to either or both, will not move me one iota. Although, if Diane Lane were to mention that her one regret was not taking me seriously as a young suitor, or the PA announcer at Yankee Stadium were to announce, "now pitching in relief for the Yankees, Paul Kidwell;" well I suspect I would be touched.

So, what does one buy the world's most satisfied man for Christmas? Well, you should ask my son who seems to have a clear path into my psyche and knowledge of me in book-like proportions. This year, he gave me an "Ove Glove" and nothing more. Yes, the glove of late-night TV fame and everyone's choice for their gag, Secret Santa or Yankee Swap present. It's the gift that nobody wants and I suspect has been re-gifted countless times during those occasions.

Until now. I suspect my son heard me complaining too many times about the paper-thin, and ill-cast oven mitts that would allow the heat to seep through to my hands about mid-way between the kitchen and our dining room. Wrestling molten-hot dishes and pans that have spent an hour or two in a 400 degree oven is always a perilous exercise and resembles a curler hurling a heavy curling stone down the slick ice. Never once did I imagine a solution to this problem and was resigned to the fact that I would have to suffer for my cooking. Well, my son had a better idea, apparently.

Late night TV and public ridicule be damned. Move over Billy Mays; my son bought me  an Ove Glove for Christmas. And just like that, my days of sparring with hot roasting pans and baking dishes are over. We are now an Ove household and over the holidays I had plenty of opportunity to break in my new gift.

Roasts, stews, soups, casseroles and the like traveled from kitchen to dining room courtesy of the greatest invention known to man; well, at least this man who relishes his role as chief cook for the family and now has another weapon in his arsenal to help him with this task.

Despite all the preparation around nightly dinners and holiday meals, my favorite meal when we are together as a family is Sunday breakfast, where omelets, pancakes, waffles, sausage, bacon and freshly-baked cinnamon or sticky buns replaces the normal work week, get-me-out-the-door quickly instant oatmeal or bowl of Mini Wheats. This past New Year's Day I made pancakes from a boxed mix from Bisquick. The only thing I added was a couple cups of chopped mangoes, whose freshness gave the meal a summer and helped offset the frigid temperatures outside my Boston home. Of course, the most important ingredient was what I add to every meal that I prepare for my family. Love. And, of course, Ove carried the love to the table so we could all eat.

Happy New Year to everyone; especially my fellow pan-men.

And here is Paul and his son, and their gloves: 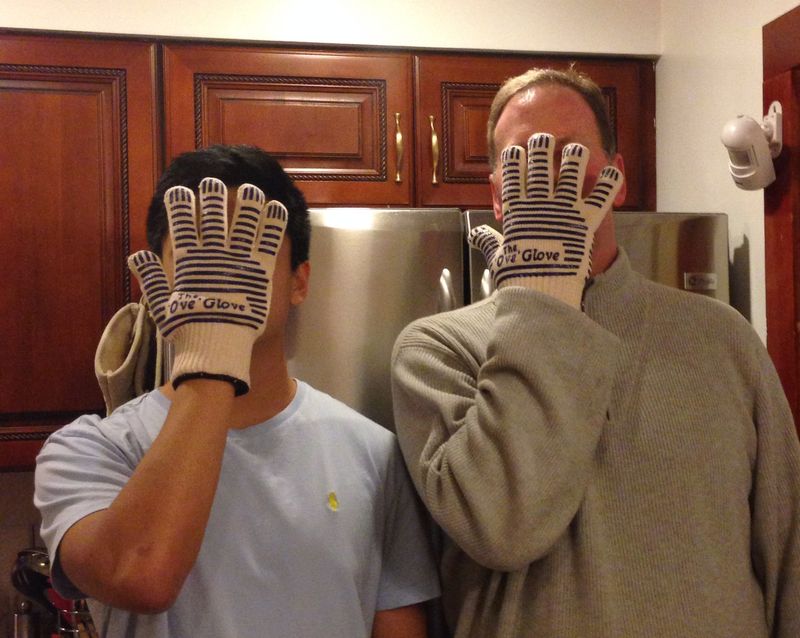