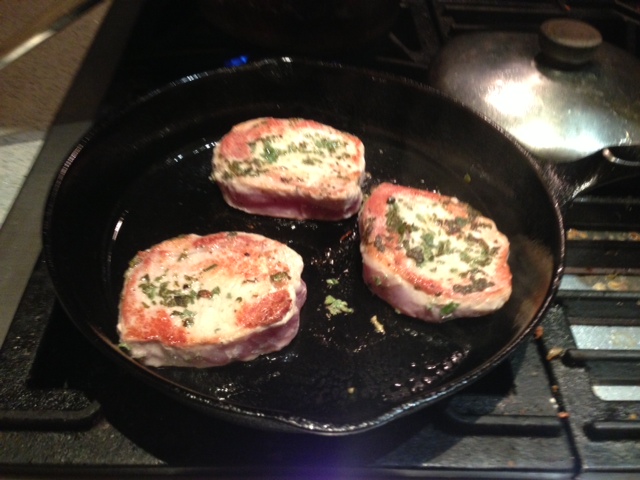 When it comes to raising children, there is the concept of the “good-enough” parent, which traces its origins to Bruno Bettelheim and Donald Winnicott. I don’t know enough about either of them to try to explain what it really means (though I know just enough to be wary—“Refrigerator Moms” anyone?). Fortunately, the phrase "good-enough" is self-evident, and while I'll leave to the experts what it means when it comes to parenting, when it comes to cooking, it should be applied more often.

Especially for weeknight cooking. After working all day, don’t worry about making the best soufflé, the greatest steak, or the most sublime piece of turbot—just get a good and decent meal on the table. If you can do that, you can sit back and enjoy it. You’ll save money, be healthier, and be closer to your family.

I was thinking about this last Wednesday, when I made pork chops. I’ve toyed around with pork chops before, but they’ve never been very popular around the house. Crusting then with cumin, coriander, and corn meal didn’t really help (though they were delicious). So this past Wednesday when I was making dinner, I decided to step back and shoot for “good enough.”

I preheated the oven to 350 degrees, and then chopped up a bit of fresh sage that was leftover from preparing the Thanksgiving stuffing two weeks ago (and speaking of that sublime stuffing, after I made it and packed it up to take to my brother's house, I realized that I had forgotten a whole step in the recipe--that of adding wine--and it just didn't matter; it was more than good enough the way it was). For the pork chops, I mixed the sage with a bit of olive oil, coated both sides of the meat, and I dropped them into a smoking-hot cast-iron pan. I browned them for a few minutes, flipped them, then slid the pan into the oven for ten minutes. The chops registered 150 in the middle, and I knew they were done. They were juicy and tasty.

Were they embraced by Nina, Pinta, and Santa Maria? Not exactly, but everyone ate their dinner. Will I make this dish again? Maybe, especially if have left over sage that I want to use up (I hate wasting herbs). Next time, I might try something different. For Wednesday night, though, it was good enough and that was good enough for me.

Put a cast-iron frying pan on to heat on high.

Mix the sage, salt and pepper, and olive oil.

Coat both sides of the pork chops with the herbed oil.

Toss the chops into the hot pan, and brown for about two or three minutes.

Flip the chops and slide the pan into the oven for about ten minutes, or until an instant-read thermometer registers 150 in the center of the meat.