Home Archives About
What Will Save Me from "A Drizzly November In My Soul?"
Post-Thanksgiving Recap: Stuffing, Turkey, Cookies and More!

OptiGrill Review: No Push-Button Future for Me 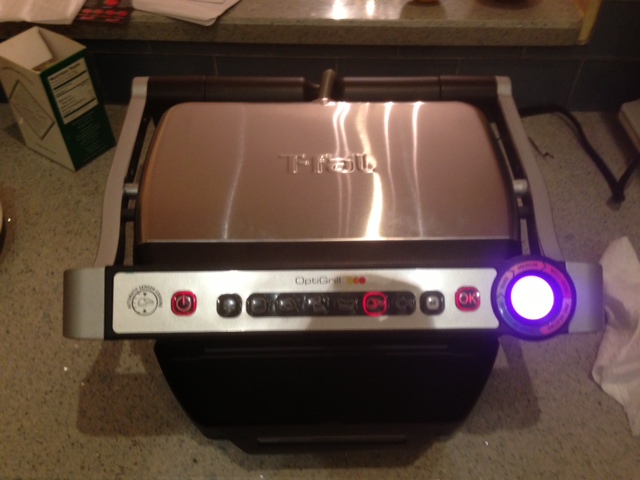 Once, when I was a boy, I saw an episode of “The Jetsons” that showed George, the father, coming home from work and complaining that his “button-pushing” finger was aching. Apparently, the jobs of the future involved little more than lifting an index finger. That strange fantasy must have lodged in my brain because when I was offered an opportunity to try out the new T-Fal OptiGrill, I jumped at the chance.

The OptiGrill is a high-tech kitchen gadget with special sensors, designed to automatically measure the thickness what you want to grill, and, with the push of a few buttons, take care of all the work. “Essentially, you can put a burger patty on the grill, press the "medium rare" option, and the OptiGrill will alert you when it is perfectly at medium rare,” its publicist said.

They sent it to me in the summer, and it sat around my house until tonight. I had a fierce hankering for a steak, and I thought it would be the perfect time to try it. I’ve become moderately adept at cooking a steak on the stove, but every time I make one I fill the house with smoke. And it’s stressful. I carefully watch the meat and measure the temperature, and hope for the best. The idea of a machine that could make the process easy and reliable (and less smoky) was too hard to resist.

I had one reservation about using the OptiGrill, but I tried to set it aside. My reservation is that I like to cook. I love the sound of onions sautéing and the aroma of a sauce reducing—the very process of cooking is so enveloping and magical, that I couldn’t imagine a machine coming close to the experience.

I unpacked the grill and prepared it for use. After I went out and bought two twenty-one day, dry-aged sirloin steaks from Union Market, I looked around online for suggestions. I had dropped $26 on the meat, and I didn’t want to mess it up. The Internet wasn’t much help. Gizmodo hated it. The "Dad's Corner" of something called Moms Review 4 You loved it. A commentor on Patio Daddio BBQ described it as a “George Foreman with brains.”

When I plugged it in, and heated it up, it smelled a bit weird—kind of chemically and electrical, and not at all appetizing. I chalked that up to its first-time use, but I wasn’t encouraged. Its lights started flashing and it started beeping, and when it was ready, I threw the steaks on the grill. The kitchen was filled with a pleasant aroma and I felt better. I looked at the indicator light, which was supposed to turn yellow for rare, orange for medium, and red for well done. The light turned yellow very quickly—too quickly for my mind—and then it started to shade orange. The glow throbbed and I was flummoxed. Light orange became dark orange. I didn’t know what to do.  Was the meat close to being ready? Was it done? What was going on under that silver shell?

I lifted the lid and took a peak. There were some nice grill marks, but the meat seemed to be steaming rather than grilling. This wasn’t working out well, and with dinner on the line I grabbed a cast iron frying pan and put it on a high flame on the stove. I pulled the meat from the OptiGrill and set it aside on a plate. As soon as the cast-iron pan was smoking, I sprinkled it with salt and tossed in the steaks. I did them one at a time to keep the heat in the pan up—I wanted a decent char as fast as I could, before the interior could overcook.

A few minutes back and forth on the cast iron pan brought the meat up to 125 degrees internal and gave the steaks a nice char. Dinner was saved, but the OptiGrill is not something I'll use again. I have a friend who saw the box in my apartment over the summer. He used to have a George Foreman grill and he asked me about it. I’ll give my OptiGrill to him. Perhaps he has the brains for it, and if he can get it to work I'll report back. I served the steaks with Chimichurri Sauce, and here's the recipe.

Chop the parsley as fine as possible.

Combine with the other ingredients, and let sit while you cook the steaks.