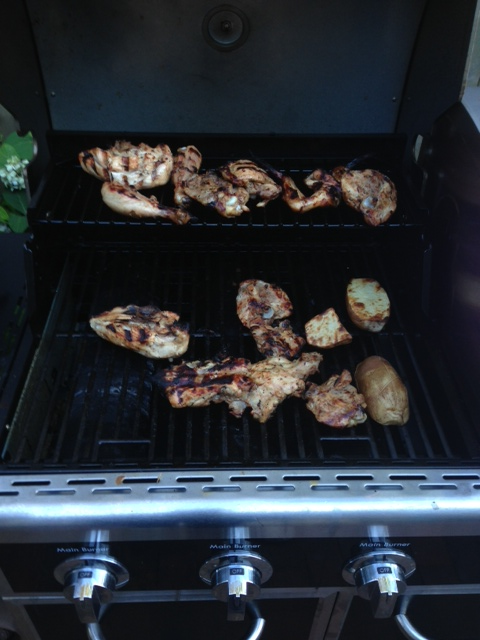 We live in an apartment in the city, and I rarely grill or barbeque anything. I don’t have the equipment or the space. And I certainly don’t have what it takes to lug a grill to the park and spend the afternoon there, firing it up amid the crowds (though I once roasted a whole pig in public, so maybe I’m made of tougher stuff than I realize).

However, I know that grills are popular. They are extremely handy, of course. It’s great fun to play with fire (don’t tell the kids), the flavor is unrivaled, and there are no pots to wash at the end of it all. Charcoal has its partisans, but gas grills are the easiest. I just love how you can turn them on and be ready to cook in a matter of minutes. If I had a back yard, I’d certainly own one.

Whenever we go on a summer vacation, I often have access to a grill. On Nantucket, recently, we had a nice big gas unit with three burners. It was sweet. One of the nights I whipped up sirloin tips. Another night, I did some chicken.

Chicken is not one of the easiest things to get right on the grill. I’ve been at parties where the legs have been black as the ink on this screen and the thighs were still pink. It can be tricky.

I have learned one simple solution: Cut the bird into parts. If you buy a whole chicken, it’s easy to slice one up. Instructions are here. Or, you can just buy drumsticks and thighs. It’ll probably cost you a bit more, but you’ll save the labor. Either way, it will make your cooking experiences a lot more relaxing.

When you have parts on the grill, you can move them around. And if your grill is the kind with more than one burner, you can keep them from getting too dark by turning off the heat on part of the grill, moving the parts there, and covering the grill. That way, they’ll continue to cook on the inside, without getting ruined on the outside.

Chicken needs flavoring more than most meats, and I solved that problem on vacation by marinating it in a commercial sauce that I found at the Stop & Shop on the island. 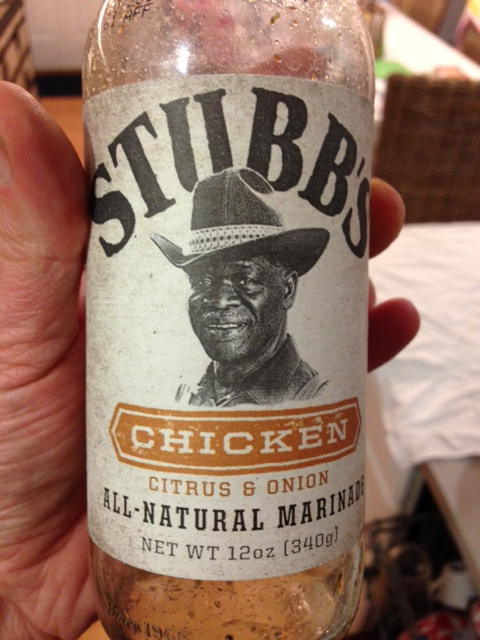 The sauce was by Stubb’s, and though I don’t usually rely on store-bought products like this, it worked very well. It was a nice balance of high flavor and low labor. It was a vacation, after all, and the chef wanted a break, too.

At least an hour or so before it’s time to cook, place the meat in shallow baking dish or a gallon-sized zip-lock bag, and cover with the marinade. Leave out if it’s close to cooking time. Put in the fridge if it’s not.

Go to the beach and go swimming.

Come home as late as you dare. Don’t shower off.

Fire up the grill. Get it good and hot.

Lay the pieces out and grill until nice and brown and 165 degrees in the thick parts. Move the pieces around the grill as necessary to keep them from burning.

Note: I did something similar once in New Jersey, and the fat from the skin pooled in the bottom of the grill. The following night, when I tried to use it again, it flared up like the Cuyahoga River in 1969. It was a disaster. In Nantucket, I avoided this by pulling the skin off the birds before marinating them. I didn’t want to miss out on the crispy skin, so I left a few intact. It worked out fine.