Home Archives About
A Visit to the Dove Chocolate Factory
What is the Best Knife for an Onion? A Recipe for Salad Nicoise

Where Did the Week-Old Chicken Go? Into the Best Chicken Soup Ever 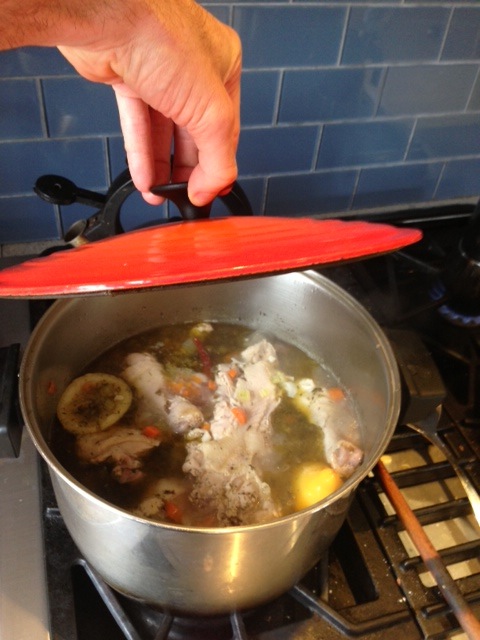 Some things just get better with time. I had a chance to reflect on this during Father’s Day. I wasn’t thinking about my skills as parent, but, rather, a week-old chicken I had lingering in the fridge.

On Father’s Day, I had planned to take it easy around the kitchen. On a typical Sunday, I’m busy cooking about three things at time for the coming week. They could be anything from quinoa salad, to black beans, to Bolognese sauce. This Sunday, though, I wanted to relax.

Santa Maria helped in many ways. She made two fantastically rich and delicious Dutch babies for breakfast, and she took the family out for dinner. For lunch, she and I had chicken-rice soup that I made that morning. For try as I might, I can’t stay out the kitchen. There's always something that pulls me back into it.

I had fallen behind in cooking last week and ended up with an extra chicken that was getting past its sell-by date. I’m embarrassed to say that I didn’t have room for it in my freezer, and I just left it in the fridge. It started to get a bit stinky, and I new the only way I could salvage it would be to make soup.

There’s something about an old chicken that makes chicken soup even more delicious, so I knew I wouldn’t be doing any harm by letting that bird molder a bit. Sure enough, when I cooked up that soup, it was rich and delicious.

Put the rice on to cook. Add a bay leaf or two and salt if desired.

Heat some olive oil in a tall stock pot.
Add the onions, carrots, and celery.
Saute until the onions are translucent.
Add the garlic and chili pepper.
Saute until the garlic is soft.
Rinse and add the whole chicken to the pot.
Add enough water to the pot to cover the chicken.
Add the bay leaves, lemon halves and juice, and other spices.
Cover and bring to a boil.
Reduce to a simmer.
Cook for about an hour, or until the chicken is cooked through.
Remove the chicken with a slotted spoon.
Remove the lemon halves, chili pepper, and bay leaves.
Pick the meat from the chicken and return to the soup.
Stir in the rice.