Home Archives About
Simple Steamed Artichokes Blow Away Self-Doubt
Cracking the Salmon Code: A Recipe to Silence a Crying Child

I’ve hit my stride as a home cook, but this success has come at a price. I often make the same things over and over (much like home cooks through the ages) and I've become so good at some of them, I can't get my kids to eat anything else. Worse, I find myself not willing to try something new, not because I might fail at making it, but I might fail at getting anyone to eat it.

This came up for me the other night. It was a Friday, and I had told the kids we'd be having Bolognese. It's one of my favorite end-of-week meals. It's easy (at least the defrosting, heating, and serving part is easy) and everyone loves it, perhaps a bit too much.

That Friday, I was meeting a friend for coffee in the morning, and he surprised me with a cooler full of rainbow trout. He had been fly fishing earlier that week, and he wanted to share his bounty. The stream he had been working was fully stocked, he said, and the fishing was so easy that he imagined hourly workers under the water putting the hooks in the mouths of the fish.

I grew up around seafood—having worked in a retail fish market through much of my adolescence and beyond—and for me, the operative word is “sea.” I’ve mostly been a salt-water man, and I haven’t eaten much fresh-water fish. The trout was new to me, but it made Santa Maria think of her childhood. When she was a girl, her brother used to fly fish for trout near where she grew up, and they had wild trout fairly often. She grew misty eyed while eating it the other night.

Nina and Pinta, who will jump at almost any fish, didn’t want to even try the trout. It wasn’t really their fault, and it certainly wasn’t the fault of the fish. It was the fault of the Bolognese. Short of serving ice cream for dinner, there’s nothing that can trump that sauce right now in the minds of my children, and they weren’t going to fall for a bait and switch. They wanted the Bolognese, so I ended up serving that, and cooking up the trout. I didn’t mind: at least it was something new.

Spread the trout on a baking sheet, flesh side up. Dress with a bit of the oil and the thyme and some salt and pepper. 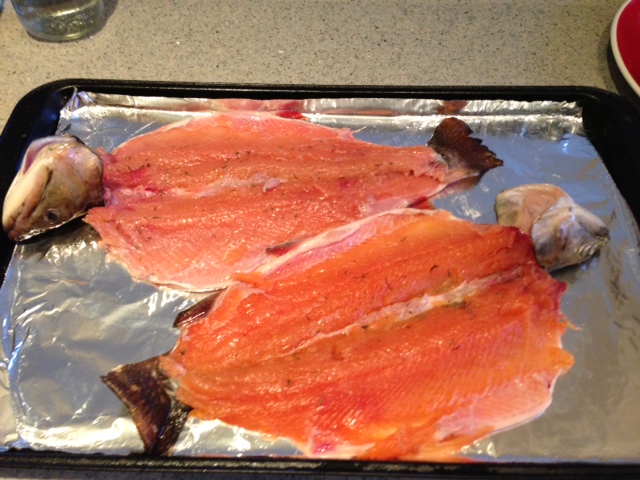 Put under the broiler about five or so minutes, until the head and any exposed skin is a bit charred and the flesh just barely cooked through. 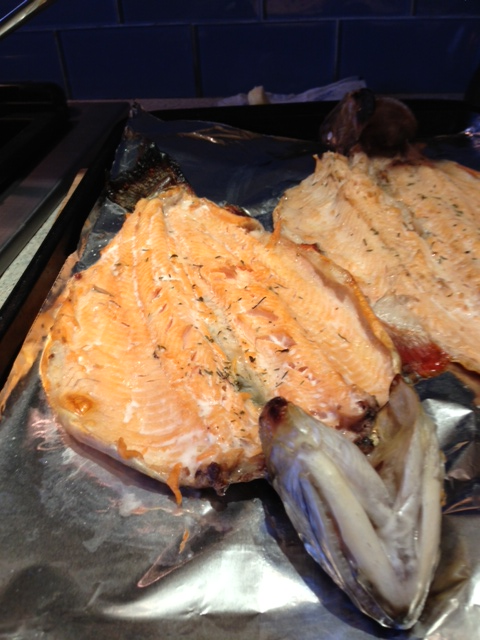 Note: fresh fish like this doesn't need much. The less done to it, the better. Same is probably true for kids.