Home Archives About
Cracking the Salmon Code: A Recipe to Silence a Crying Child
Where Did the Week-Old Chicken Go? Into the Best Chicken Soup Ever

A Visit to the Dove Chocolate Factory 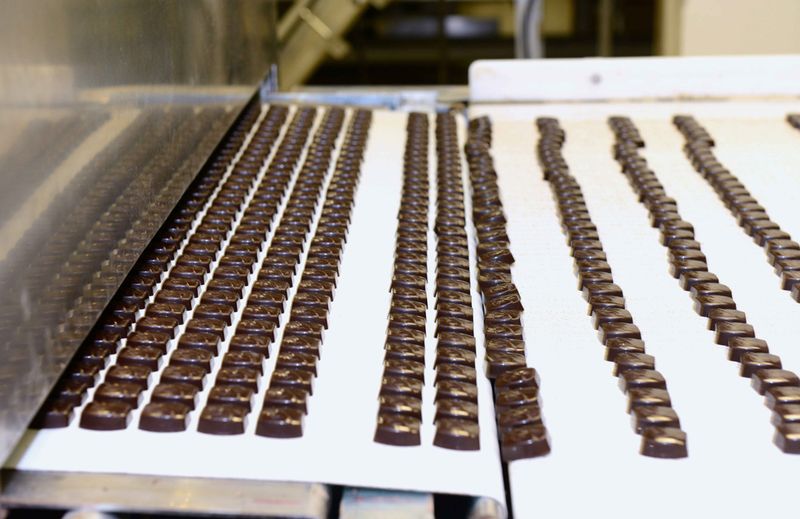 I knew that sweet and wonderful things would start happening as soon as I became a parent and started blogging about cooking, but I never expected to get a tour of a chocolate factory. This is true—the other day, I was on a junket with mom and food bloggers, thanks to the folks who make Dove Chocolate. They wanted to show us how they do it, and tell us a bit about their latest product, which mixes mint and dark chocolate into an enticing treat (I’ll have more about it soon).

Our train tickets said “Elizabethtown, Pennsylvania,” but when we disembarked at the station, which was surrounded by rolling green hills and air that smelled like chocolate, a chauffeur asked us if we were going to Mars. I blinked and then realized that she wasn’t referring to the planet, but rather to the parent company of Dove. This is because when she said “Mars,” all I could think of was “Venus.” At that moment I was surrounded by a gaggle of witty and talkative mom bloggers. I was the only man in the group. Paging Dr. John Gray…

The mom bloggers included Michelle (The Adventures of Supermom), Amy (Selfishmom), and Coleen (Classymommy)—clearly I was out of my league here. I did my best to follow along. My largest handicap, so to speak, was my lack of a sweet tooth, which has helped to keep me healthy for years, but in this case created a challenge. While all the bloggers, among them Alissa, of Clever Compass, Jennifer, of Savory Simple, Rachel, of Coconut & Lime, were “oohing” and “ahhing” over the chocolate, I was ogling the machinery.

The factory was a marvel of cleanliness and efficiency. It was a spotless place of whirring metal, tireless robots, and serious-faced technicians, outfitted, like us, in lab coats, hairnets, helmets, goggles, and industrial-strength earplugs. Safety and hygiene were paramount there. The giant machines had German names like “Bosch” and seemed to represent the pinnacle of engineering. We learned that there are little markings inside a box that are read by sensors on the machines, which whip and flip and spin the packaging material into boxes and wrappers with lightening speed.

The best way to imagine the machines is to picture the world’s largest photocopier, but instead of paper going in and coming out, there is chocolate. And the few times the machines broke down, the technicians looked exactly like office workers trying to get a jammed photocopier to work. They slid out big parts of it, and re-aligned bits of wrapper and metal, closed up the doors, and pushed the buttons again to see if it would work.

Ed Seguine, Dove’s resident chocolate expert, led us through a tasting of the three lines of Dove Promises, the little chocolate treat that’s wrapped in foil and comes with an inspirational quote inside. He taught us to savor each bite, and also went on to discuss the mapping of the chocolate genome (which was accomplished a few years ago) and how that information is kept in the public sphere (no one can patent it) so the industry and farmers can find better ways to grow cacao trees, the seeds of which give us chocolate. It was a fascinating trip, and I can still smell that enticing chocolate scent in the air, and taste the creamy flavor of the Dove bars. I'll be return shortly with more on the new product, which I plan on giving away. Come back soon.

One final note: I was paid to take this trip and cover it here, and that has to be the sweetest most wonderful thing of all.