Home Archives About
Beet and Mint Salad: A Harbringer of Summer
Family Fish Tacos for Young and Old

Weeknight Linguine alle Vongole? It Can Be Done! 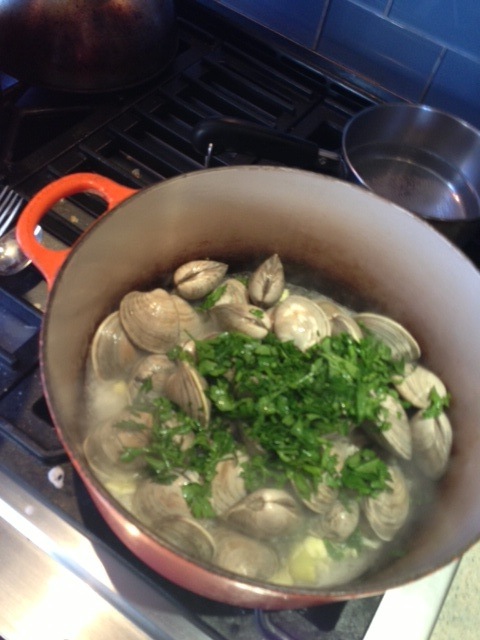 I often get asked some variation on the following: “What’s a good fast meal for a quick dinner?” And the answer I’ve always given is to plan ahead. With the right ingredients around, there are many recipe options that can be done in about a half an hour.

Planning ahead, though, has its shortcomings. What if you plan ahead, and then the world doesn’t cooperate. Or what if when you’re planning ahead, you happen to be tired? Or worse, still, full of energy, ambition, and hope? In that case, you might plan on doing too much, which gets me around to how we ended up eating linguine alle vongole on a weeknight.

Now that spring is here, and the folks at Blue Moon Fish are back in business at the Grand Army Greenmarket, I’ve switched into my warm-weather routine of getting flounder, porgy, or clams on the weekends. I planned on having porgies last Saturday (they’re perfect for fish tacos—something I need to blog about here next chance I get because I’m sure you’ll love them, seriously) and linguine alle vongole on Sunday.

The thing I didn’t plan on was being out of the house on Saturday evening. Ironically, I was leading a panel on dads and cooking at the Food Book Fair, and I wasn’t able to be home cooking. I punted and had Santa Maria serve everybody Bolognese and pasta.

So I had the porgy tacos on Sunday and that left the clams for Monday. Linguine alle vongole doesn’t strike me as a weeknight dish, but I’ve learned a new trick that can transform almost any dish into a weeknight quickie. I might sound like an infomercial salesman, but I’m not kidding. Here’s the secret: do the time-shift shuffle and take care of the prep work before it’s time to cook. That way, putting the dish together doesn’t take much time at all.

I washed the clams and parsley and other herbs the night before. Had I peeled and sliced the garlic then, too, I would have saved even more time. When I came home Monday night after working all day and was then facing the GET-THE-DINNER-ON-THE-TABLE-BY-6:30 deadline, I was in good shape.

Linguine alle vongole is a quick dish, provided you do the pre work ahead of time. It was a real treat for a weeknight, and it’s nice to know that such delights can be put within reach of the working man.

Put a pot of water on to boil

Scrub the clams well (do in advance)

As soon as the water boils, salt it and start cooking the pasta, and then proceed to other steps.

Heat some olive oil in a stock pot.

Add the garlic and the pepper.

Add the clams, the herbs, and the white wine and cover.

Cook until the clams open up, just a few minutes (give the pot a good shake every so often).