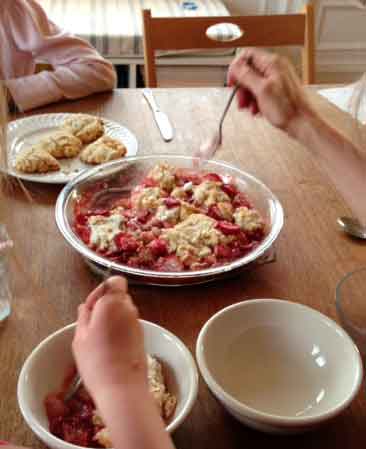 Once upon a time, I was six. And once, even, I was eight. But never before have I been a parent of a six-year old and an eight-year old, and I have to ask, does it have to be so full of yelling, screaming, crying, and other forms of conflict? And I’m just talking about Santa Maria and myself—just kidding. But seriously, did kids always fight this way, this often?

Now, I’m not blind, and I’m not an idiot, so I know I bear some responsibility. If the 1971 film “Willy Wonka & the Chocolate Factory” is to be believed, mothers and fathers are to blame when their children are brats, though I don’t happen to know any brats myself.

Around the dinner table, things often come to a head, especially when dessert is served. Santa Maria recently made a quick strawberry-and-rhubarb sort of compote with biscuits, and the children went to war over who was getting more biscuits, or who was getting bigger biscuits, or some other earth-shattering slight. Their yelling took all the sweetness out of the moment.

Later, Santa Maria was distressed, and she told me privately in the kitchen that she couldn't be happy when everyone in the family was fighting. She looked up at be dolefully, and asked if I could be happy in situations like this. I didn’t have the heart to tell her then that it was actually the only way I knew how to be happy. Growing up, my parents yelled at each other and my siblings routinely violated the Geneva Conventions when they were supposed to be babysitting me.

Despite (well, actually, because of) the intermittent conflagrations, we’re working hard around the table and house to defuse the fighting, to cease the yelling, and drain the swamp of anger. It’s a slow process. At our best moments, we work together to have a family meeting once a week (if you haven’t checked out Bruce Feiler’s “The Secrets of Happy Families,” which goes into detail about family meetings, I suggest you do so right away; it’s a very useful book).

Santa Maria decided to make this dessert because she was looking for something that was easier and a bit more healthy than pie. It’s basically a pie filling, without the crust. I dubbed it, with deepest affection, “Ugly Pie” (and that was before the fighting started).

If you wanted to fancy this up, you could top the biscuit with the compote and then cover it with whipped cream. You’d have a pretty decent dessert then and there. This recipe is a bit of a work-in-progress, and you might want to play around a bit with the biscuit part of it. The compote, on the other hand, is just perfect. Consider making that and putting it over vanilla ice cream. Just don’t fight over it.

Mix together ingredients, and let sit 15-20 min (or you'll have little hard nubbins of tapioca)

Then cut in 4 Tablespoons butter

Until it sticks together

Drop biscuits in the cooked compote, if Ugly Pie is desired. Serve with compote over the biscuit, if so desired. Whipped cream works in both cases.