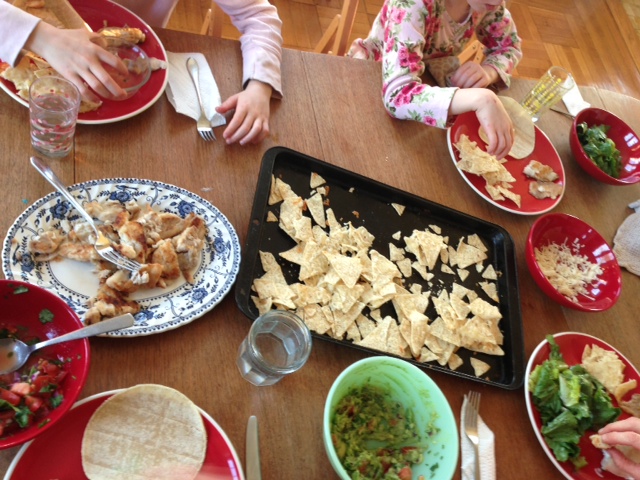 Sometime between the present day and the birth of my first child, about eight years ago, I picked up the knowledge that I’m not young anymore. I’m certainly not old, but young? Fuhgeddaboudit, as they say in my home borough.

One of my biggest lessons this ongoing education came a few summers ago, when I paid a visit to Rockaway Beach, to check out their burgeoning food stands. I had read somewhere about the otherworldly fish tacos that were served just off the boardwalk. We drove out to the Rockaways to try them, but could not, for the life of us, find a parking space. While I circled in traffic, Santa Maria took the girls and sought out the tacos. Apparently, I was not the only person in the metropolitan area to have read about them. There was a long line, full of self-possessed, pale-skinned folks. These were mostly bearded men and tattooed women who liked the same kinds of clothing, but more than their fashion choices they had one thing in common: they were all twenty-something.

Santa Maria bravely managed our two very little girls, and finally ordered a few of the tacos. Eventually, I found a parking space, and we met on the boardwalk to eat them. They were good, but not great. They had slices of radish on them, and other neat toppings, but they just weren’t worth the hassle.  Only someone young with a lot of time on his hands would make the effort to eat those tacos.

I knew we wouldn’t be back for them, but I did like the idea of a fish taco. Santa Maria is an expert in making guacamole and fresh salsa, so it wasn’t long before I was serving up fish tacos at home. The kids love assembling the tacos at the table, and the meal is now one of our top favorites, coming to rival that surest-of-sure things, the ever steady Bolognese and pasta.

I use porgy filets, a very cheap fish for the tacos. Porgies have a checkered reputation. According to SeaFoodSource.com,  “The name “porgy” comes from an American Indian name meaning “fertilizer,” a common use for these abundant fish during Colonial times.” I can think of other words for fertilizer that I wouldn’t want to eat. That same source describes the meat as tender and white, but in my experience, I would say they are very oily fish—they certainly spoil even faster than a bluefish, and this has made them hard to find fresh. Any fish that can’t be found fresh is going to get a bad reputation, and I’m sure this is what has kept the price down on these fish. Fortunately, the folks at Blue Moon Fish have them, and they are fresh enough to hold for a day, if necessary. The meat is perfect for a dish like the tacos, where they are served with salsa and other sauces. I love them for this.

Porgy flesh is very firm, and I cut the bones out of the center of the fillet and then cut the fish into small strips. I roll them in flour and then fry them in a generous bit of oil. They brown up nicely, and I put them on a platter.

I warm corn tortillas and put those on the table, along with corn chips with melted cheese (just spread some on a cookie sheet, grate a bit of cheddar over them, and place in a 350 degree oven for about five to ten minutes, or until the cheese is melted). The fish, chips, guacamole, and fresh salsa make a delicious dinner. When I sit with my girls and they start laughing at the end of the meal, I certainly don’t feel old. I would even go so far as saying I feel young, though I know better.

Start by making the salsa

Stir ingredients together, and enjoy

Next, make the Guacamole

Peel and mash the avocado and combine with the other ingredients

Cut the pin bones (that row of bones down the center) out of the porgy fillet and slice the fillets cross ways, on a diagonal, to make decent-sized strips.

Lay some flour on a plate and season heavily with salt and a bit of pepper.

Heat a generous amount of olive oil in a frying pan on a medium-high heat.

Dredge the fish pieces in the seasoned flour and lay them in the hot oil. Don’t crowd the pan. Cook a few minutes on one side until browned just a bit, and then flip them. Cook on the other side until done, a few minutes more.

Set the pieces of fish aside on a platter and keep warm until you’ve cooked all the fish.

Warm the soft corn tortillas in a pan one or two at a time (depending on how large your pan is) and keep warm wrapped in a dishcloth as you take them off the heat.

To make the cheesy corn chips.

Place the cheese on the chips and place in a hot oven for about ten minutes, or until the cheese is melted and bubbly.

Place the warmed tortillas, the fish, the cheesy chips, the salsa, and the guacamole on the table. Each diner can make his or her own, with the various ingredients.