Home Archives About
Have Faith: Coriander and Cumin Cornmeal Crusted Pork Chops
Weeknight Linguine alle Vongole? It Can Be Done!

Beet and Mint Salad: A Harbringer of Summer 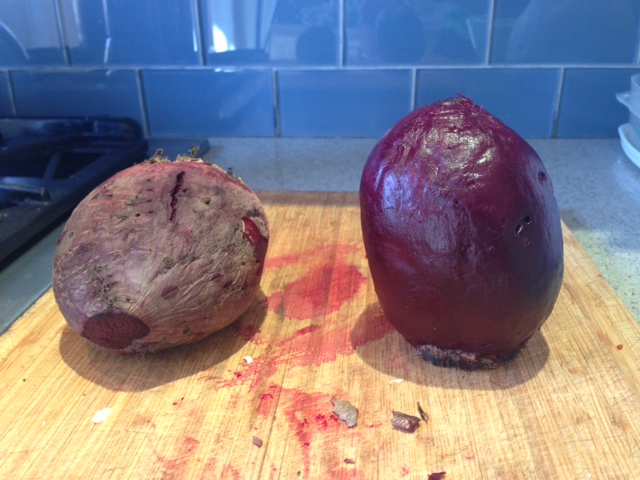 Guess what? Work and other things didn’t slow down at all last week. Not that I’m complaining. It’s a bit of a luxury to get paid to write, and I have two assignments due this week, which makes me feel doubly fortunate. And one of the other things I had to do last week was to tour a chocolate factory.  I’m not joking. That’s my life at the moment, twisting up words and tasting chocolate.

I’ll have more on the chocolate-factory tour soon, I promise, along with some treats for you all. In the meantime, I’ll get back to my life’s work, which is not actually cooking for my family, but, rather, ever so slowly wiping away the emotional fog of my relationships in the hope of communicating better and seeing clearly what matters most. It’s not a linear progression. Recently, Santa Maria left me a little note with the names of dishes written on them. It started with script letters spelling out  “Chicken Tikka Masala,” and then went onto list a slew of other dishes.

I first saw the list when I was trying to compile the weekly shop list and the menu for the following week. It was about 10 p.m. on Friday, which in parent time is the single-person’s equivalent of about 2 a.m., and I was tired. I glanced at it, and, in light of all the things I knew I had to do during the coming week, quickly discounted it. There was no way I’d have time to make Chicken Tikka Masala, as much as I might like to eat it myself.

I didn’t completely disregard all the suggestions Santa Maria had made. One of the things I did remembered from her list was “Beets.” I thought of it when I was doing my weekly food shop at 6:30 a.m. on Saturday morning. There in the produce aisle were some massive, lovely beets. I bought a bunch and took them home.

This morning—while I was making pesto and quinoa salad for the week and pancakes and bacon for breakfast—I decided to boil the beets, to make a salad with mint later in the day. Beets and mint go together like sunshine and the beach. They are just made for each other.

I had fun cooking the beets. When I took them out of the water this morning, they looked quite odd. Pinta asked what those giant blobs were, and I told her “octopus testicles.” “Ewwww,” she said, and then we all laughed. I cooked the beets in the morning, and this evening I skinned one, diced it, and combined it with a bit of fresh mint and a Dijon vinaigrette. It was a perfect side dish. Every bite made me think of summer. Here's how it looked in the sunshine: 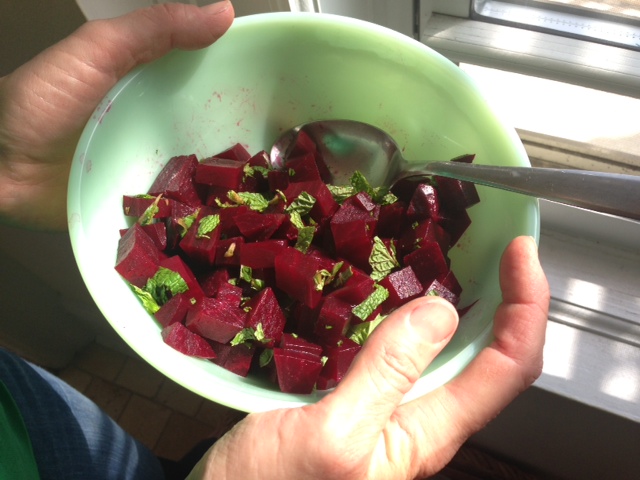 Submerge the beets in a large pot, and bring it to a boil.

Reduce to a simmer, and cook until a fork can slide easily into the beet.

Remove from the water and let cool.

Once cool, slide the skin off with you fingers and give the whole beet a rinse.

Combine the beets, the mint, and the vinaigrette.

Note: these amounts are approximate, and this will probably give you more dressing than you need. Keep any extra in a glass jar in the fridge for as long as you might like.

Note: also, if you cook more beets than you need to use, they will keep for a few days in the refrigerator. Don’t peel them until you want to use them.