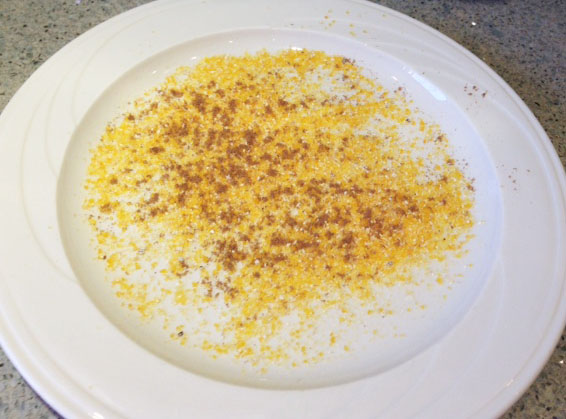 I didn’t get a chance to post anything here last week because I was very busy with work. I have a couple of freelance articles that have been taking up my time, and I have a few additional professional concerns that haven’t taken up much of my time, but have sapped my mental energy. Then, of course, I have my family, which manages to do both at once—eat up my time and energy. So as I promised, I’m doing a short post on how to feed a family in time of extreme work stress. I will start with the most important point: Have faith that you can do it.

I was recently reading Mark Nepo’s “The Book of Awakening,” and it explained faith to me in a way that suddenly made sense. He talked about a man being thrown into water. If he doesn’t have faith that the water will hold him up (i.e., if he doesn’t believe—and know—that he can swim) he will panic and the water—which by no stretch of the imagination is supposed to be able to support anyone—will engulf him, and he will certainly drown. Of course, there was that gentleman way back when who had so much faith he could walk on water, but I’m just talking about getting dinner on the table, so it’s that much easier.

So if you’ve been cooking for a while, just have faith that you can do it. And if you’ve been reading this blog for a few years, you’ll have a load of ideas at your fingertips: use your freezer, plan ahead, stock your larder.

Here’s a new one: Coriander and Cumin Cornmeal Crusted Pork Chops that I threw together the other night. (In all fairness, if you want a thoroughly vetted, tested, and food-approved recipe, try one of the Cook’s Illustrated ones; they get paid for creating recipes that work—I just do it to survive.)

I always have cornmeal on hand, for my cornbread recipe, and I decided to dress up my standard (read: boring) weeknight pork chops with a bit of flavoring. Maybe it was the alliteration, or maybe it was the aroma, but either way I decided to combine coriander and cumin and dress up my pork chops. I didn’t measure, and I don’t think you should, either. If you’re under pressure at work, with your family, in life, or for whatever reason, don’t sweat the details. Just have faith, and feed your self and your family well.

Spread the cornmeal on a plate, and add the spices, along with some salt and pepper.

Mix them well with a fork.

Take each pork chop and place it in the cornmeal mixture until coated well. This is not a perfect coat, and much will fall off, and that’s okay. It’s a weeknight, and you are busy, remember?

Heat a cast-iron or other thick-bottomed frying pan on a medium high heat, and add a bit of olive oil.

Place the pork chops in the pan and keep the heat on medium low. Cover the pan, and depending on the thickness, cook for about three to four to five minutes. Don’t worry about browning them at this point. With thick chops, my concern is more about cooking the interior before browning the exterior.

Flip the chops and cook another four or five minutes on the other side.

If necessary, flip them back and brown them on a higher heat.

They are done when the interior temperature reaches 145.

Let them rest a few minutes while you get the rest of your meal—or your life—in order. Here's how it will look: 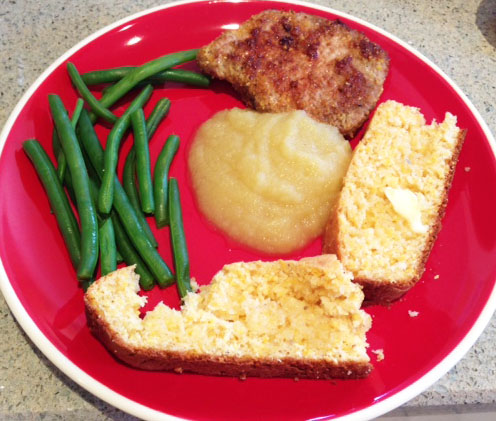