Home Archives About
How Many Burners Does a Man Need?
How to Cut Up a Chicken, Otherwise Known as Life is What Happens When You’re Busy Cooking Other Dishes

Grilled Cheese and a Poor-Man's Croque-Monsieur 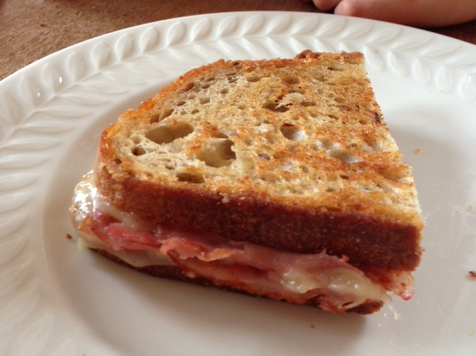 They like them open faced, with cheddar, and it takes about ten minutes (sometimes less) under the broiler to get them finished. Do you really want me to tell you how? Okay, I will: lay the bread on a cookie sheet, put slices of cheddar on top, and run under the broiler until melted. There, you’re done. You could probably cook it faster than it takes to read this post.

Sometimes, I’ll play around a bit with the grilled cheese, and Nina will ask for a Croque-Monsieur. She had one a while back at my workplace cafeteria, and she loves them. The version I make is a bit of a lie. It’s more a poor-man’s Croque Monsieur than anything else, but she still likes it.

I basically make a closed-faced grilled cheese and put some frizzled ham (ham that I’ve fried up in a pan) in the center of it. I used to make it with Gruyère, but I’ve since started economizing, and have resorted to using cheddar.

A true Croque-Monsieur is a thing of beauty. A crunchy, savory, and succulent sandwich. It's mouthwatering. Am I using too many adjectives? I wonder, but writing this entry is making me hungry for one right now, and while hunger may be a good seasoning, it’s not exactly an aid to thinking or writing.

The origins of the Croque-Monsieur are a good story, though. According to legend (and this About.com French Food Site), “The Croque Monsieur, or “Crispy Mister,” appeared on Parisian café menus in 1910. The original Croque Monsieur was simply a hot ham and Gruyere cheese sandwich, fried in butter. Some believe it was accidentally created when French workers left their lunch pails by a hot radiator and came back later to discover the cheese in their sandwiches had melted.”

Today, the Croque-Monsier is a bit more elaborate. Ina Garten, of the Food Network, has a tasty recipe here, and the online recipe site Epicurious has one here. They both involve making sauces, and with two kids running around that’s kind of a far-fetched idea for me. But you might feel differently. And if you’re looking for ways to spice up a plain, old grilled cheese, last month’s Food Network Magazine had fifty different ways to do so.