The Quick-Meal Quest: A Shifty Trick to Cook Rice in Five Minutes 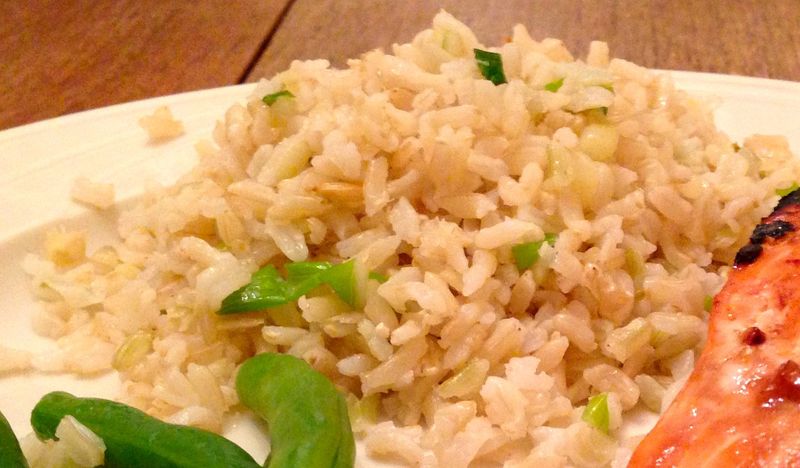 Cooking always takes time, and, usually, the quest becomes how to do it faster. Take one of the most e-mailed article in this weekend’s New York Times, “One Dish, One Hour,” which considers Martha Rose Shulman’s quick meals. I like Shulman’s approach:

You may have a different opinion than I do about what constitutes a quick meal. There are quick meals that involve little or no cooking — paninis and sandwiches, uncomplicated omelets, scrambled eggs, and meals that combine prepared items with foods that you cook — but I chose to focus on dishes that are made from scratch.

I like to cook things from scratch, and I have strong opinions on what a meal makes. A Panini? Call that a meal around my house, and I’ll tell you to call a cab and go home. I need to eat, and I need to eat a lot. A meal for me has a protein, a starch, and a green vegetable.

My answer to a quick weeknight meal is to shift the time-consuming parts of the meal to other parts of the day or other parts of the week. Yesterday morning, while making bacon and eggs, I started a pot of Bolognese—which will become Wednesday night’s super-fast pasta dinner. I’ve been making that sauce long enough now, so I can do those two things at once (though I did burn some of the bacon, so maybe I need more practice), and while we had breakfast and then played around the house, that sauce cooked down without my involvement.

Last week, I wrote about a new way to cook salmon, and I received a couple of responses from readers with good ideas for the fish. I’ll post those soon, but right now I want to talk about the side dish I served with my salmon. I have a super quick way to dress up rice, by seasoning it with a bit of ginger, garlic, and some scallions.

The first thing you need to do, though, is to get the cooking of the brown rice out of the way.  You need to shift the cooking from the p.m. to the a.m. Brown rice takes about forty-minutes or so, and if you do that in the morning, between making sandwiches and getting the milk and cereal on the table, you’ll have shaved a lot of time off making your dinner.

I cook my rice like I’m making pasta. I boil a big pot of water, salt it a bit, and then dump whatever amount of rice I think I might want—say a cup and a half or so—into the boiling water without measuring anything. I bring it back to a boil, uncovered, and simmer until its done, about forty minutes. I test it when it is getting close to being finished by biting into a grain or two. When it is ready, I strain the rice, discarding the water, and then I let the cooked rice, in the strainer, sit on the stovetop all day long, with a cover on it. I don’t bother to refrigerate it, and it keeps just fine (I usually stand the strainer over the pot I used to cook the rice, thus shifting the cleaning of that pot until much later, too).

When I come home from work and I want a flavorful side dish, I chop a bit of garlic, some fresh ginger, and I slice up some scallions. I sauté the scallions a bit first, with a chili pepper, and then add the garlic and ginger, followed by the rice. I give it a good swirl with the spatula, and I’m done. One part of a quick meal is easly at the ready.

Sauté the scallions(and the chili pepper, if you are usuing it)  for a minute or two in a bit of canola oil.

Add the ginger and garlic and sauté a few minutes more.

Toss the rice in the pan and give a good couple of stirs.

Turn the heat off and serve when ready.