The Eggs Stay In the Picture: An Oscars Guest Post 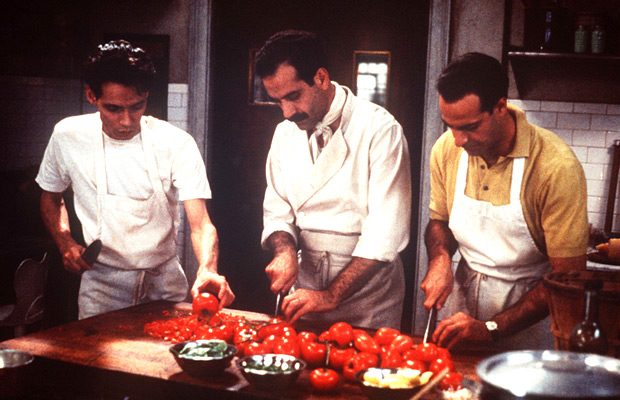 The Oscars are coming up on Sunday, and while I wish I had something interesting to say about them, the truth is that I get to the movies about twice a year. I can tell you that the latest James Bond film was actually very good, but I don’t think it’s up for an award.

Fortunately, I heard this week from my Boston-based friend in the kitchen Paul Kidwell (who has contributed to this blog before; his most recent post was particularly poignant), and it turns out that he is a big movie buff. He offered the following guest post. Enjoy!

For many who follow movies, this coming Sunday is their Super Bowl as Hollywood's best and brightest are honored at the film industry's annual Oscar ceremony. Movies used to be one of my passions, but growing out of Hollywood's target demographic means two things. You come head on with the demands of home and family that keep you away from the local art house or cineplex, and reach a certain age where you realize that movies are made for your kids and not for you. It has been a while since I paid attention to the movies, although I remember that as a young graduate student in Boston I used to steal away to the old Harvard Square Theatre with my brother to watch double features like "Last Detail" and "Chinatown," or "Take the Money and Run" and "Bananas." There was a time when I could almost recite the entire dialogue in "Chinatown" which I have seen more than 50 times.

Movies have been replaced by cooking in my life and, of course, it makes me wonder about food's place in many of the movies I have seen in years past or the current crop of films that I will never watch. Some of my favorite food scenes include “The Godfather,” where Michael Corleone stakes his claim in the family business by killing Virgil (The Turk) Sollozzo in a little Italian joint after they order dinner. "Try the veal, it's the best in the city," says Sollozzo. Then, BLAM!! An other favorite scene is a very young Jack Nicholson in "The Last Detail" talking about the virtue of Heineken Beer. "It's only the best God-damn beer in the world. President Kennedy drank Heineken." Plus, the movies like "Dinner Rush," "Tortilla Soup," or "Eat, Drink, Man, Woman," all of which have food at center stage. But, my all-time favorite movie food scene, and one that deserves Oscar consideration as best food scene ever is the final kitchen scene in "Big Night."

Two brother restaurateurs, played by Stanley Tucci and Tony Shaloub, put all their resources into creating a night that would finally put their struggling Italian restaurant on the map by preparing a feast for then-famous bandleader Louis Prima. When Prima pulls a "no-show," the brothers are crest-fallen and we assume the restaurant's days are numbered. A visibly forlorn Tucci enters the kitchen and whips up some eggs for his equally depressed brother and waiter (played by Mark Anthony). Few words are spoken, yet the elegance in how he prepares and cooks these eggs, and shares with the other two men is beautiful. Food at its simplest and most captivating, as it nourishes a broken heart and tortured soul. As a pre-Oscar dinner, why not try a frittata with a side salad; and maybe a hot bowl of tomato soup. It’s still winter after all. The envelope please.

HEAT butter in 6 to 8-inch nonstick omelet pan or skillet over medium heat until melted.

POUR IN egg mixture; cook over low to medium heat until eggs are almost set, about 8 to 10 minutes.

COVER and LET STAND until eggs are completely set and no visible liquid egg remains, 5 to 10 minutes.