Beyond Bubbie: A Night of Stories about Food and Family 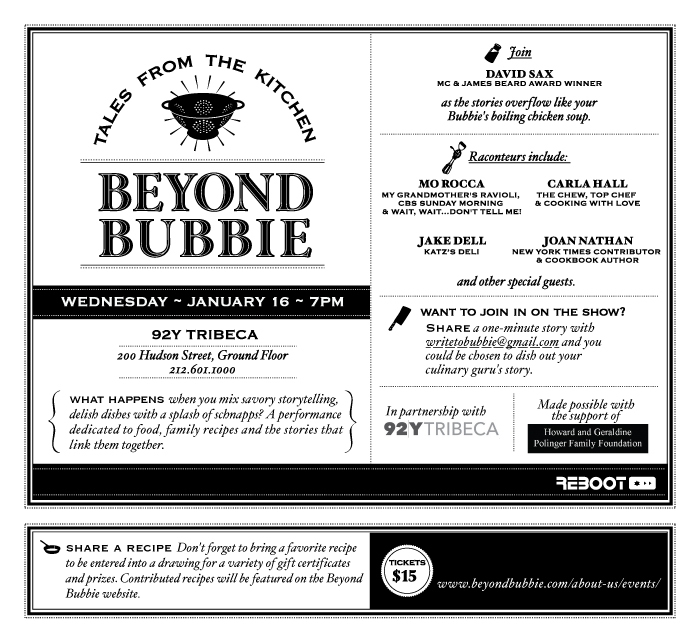 I’ve been busy with a few freelance projects this week, and instead of a post about what I’ve been cooking around the house, I want to mention a cool event that I’ve been invited to join. It’s called Beyond Bubbie, and it’s a night of stories about food and family (and, of course, grandmothers, as "Bubbie" is that word rendered in Yiddish). It is on January 16 at 7 p.m., at the 92Y Tribecca.

If you have a good story about your grandmother, you might be able to join everyone onstage. They’re taking submissions for one-minute stories, and if they like yours, you get to tell it live. Email them at writetobubbie@gmail.com for more info. In the meantime, I need to get back to working on my freelance projects, as well as the story I’m going to tell that evening. And if you want to come, tickets and details can be found here.

Allowances, Chores, and the Dinner Table 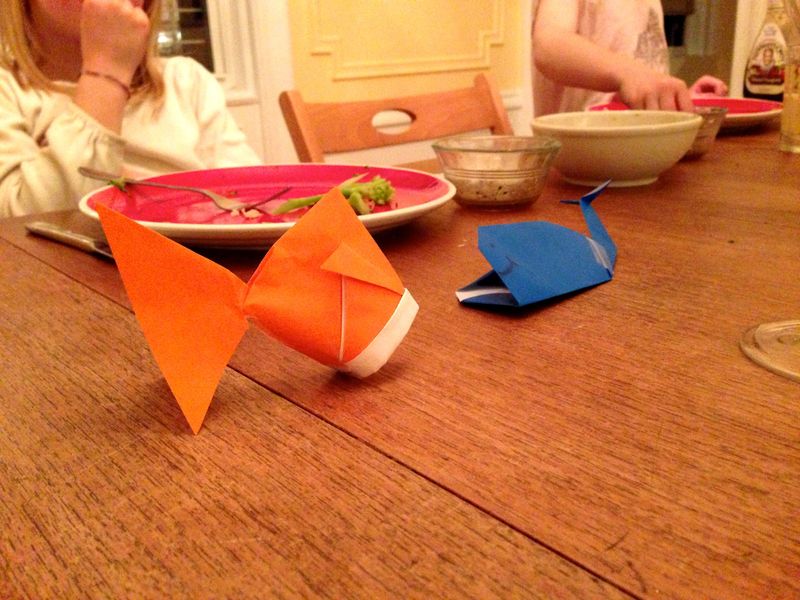 Good parenting is all about good thinking, and at this time of year, it is common for people to look forward and make resolutions about how they will change their lives. Right now, though, I prefer to look back at what we’ve accomplished. On the cooking front, I’ve added dozens and dozens of recipes to my repertoire. Some were born of inspiration—I returned to entertaining and threw a number of memorable dinner parties—and some were born of desperation—my Jenn-Air oven is still on the fritz, and just the other day I made my Broken-Oven Chicken Curry again, and I’m happy to report that it was just as good this time as it was the first time around (Really--make it, you'll like it!). And this time, the girls ate the chicken, which might not sound like much, but it is. Pinta, my youngest, has an odd aversion to chicken, which to my mind is a bit ridiculous, but never mind that. Yet when she had this chicken curry, she declared that the chicken was “delicious.” Yes, Victory.

On the parenting front, we introduced weekly family meetings and allowances for the children. I didn’t grow up with an allowance, and I’m determined to give my children one, and for one reason only. Money is a tool, like a pencil or a pen, and the only way to learn how to use it, save it, make it, invest it, and spend it wisely, is to have some of your own. So they now get two dollars a week, half of which they have to set aside for savings.

We also introduced more tasks for the children to do around the house. Some might call these chores, but I avoid that noun (and these tasks are not directly linked to the allowance because of Reason No. 1 for the allowance itself). I frame the tasks as things the children need to do to make life around the house better. I’m trying the “we’re all in it together,” kind of approach, because, Lord knows, we are all in it together.

So far, this has proven to be remarkably beneficial. The simple act of having a meeting every weekend in which the children can give voice to what they want to do—from getting water for the table to setting the table to putting away toys to folding laundry—makes a huge difference. Children—like adults, too—like to be heard.

The system is somewhat new, so I might experience different results shortly, but for now, it’s working almost too well. This evening, Nina and Pinta were fighting over who could set the table (it was the younger one’s job, but the older one wanted in on it, too.). Talk about being embarrassed by riches. My kids were quarrelling over who could do a chore!

I tried to resolve this highly absurd tempest by suggesting that Nina make a centerpiece for the table. It would be nice to have one, I thought, and it would give her some way of contributing. Unfortunately, I didn’t think fast enough, and my suggestion didn’t fly. It wasn’t specific enough. I would have done better to remember the night before, when Nina actually made some underwater origami that we used to decorate the table. That would have been smart thinking.

What cooking or parenting accomplishment are you most happy with from 2012? I’m interested to hear about your experience at and around the dinner table. Drop me a line or make a comment, and let me know!