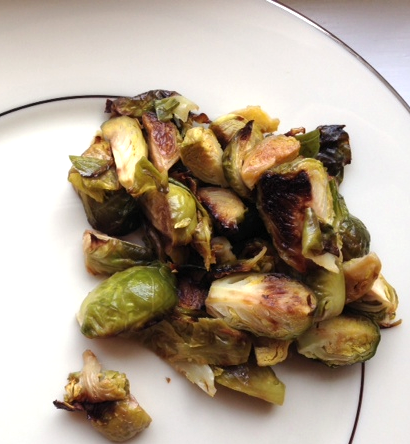 The family dinner last Sunday was real treat. The company was a pleasure and because Monday was a holiday, there was no real pressure to get back to work, get back to school. It’s a shame that the only time we’re so relaxed on the weekends is when there’s a long weekend, but such is modern life. I don’t think I’m the first parent to complain about the pace of things…

And as I mentioned earlier this week, the apple-and-sage pork roast was a big hit. I liked it because it was easy and delicious (to say nothing of cost effective), but the real star of the meal were the Brussels sprouts we had on the side.

They were so enticing for a couple of reasons, the first being that my sister did all the hard work in getting them ready. It was her amazing, completely unsolicited contribution to the meal, and I think it allowed me to watch the second half of the San Francisco-Atlanta game in peace. Or rather, it allowed my visiting friend (who is always cooking for his family) to watch it in peace (or read the paper, or whatever it was he was doing—that game was great, and I was distracted), because my plan all along was to have him cut up the Brussels sprouts.

Brussels sprouts are one of my favorite vegetables, but like any good marriage, they’re a lot of work—too much if you ask me, so I hardly ever make them. In this case, I knew my friend could do the peeling and cutting and I wouldn’t have to worry about it. But my sister stepped up, and took care of this herself. She even par boiled them, so all I had to do was gently brown them in the oven, while the pork roast cooked, naturally, and while San Francisco came back to defeat Atlanta. What a day!

Using as many Brussels sprouts as you need for your gathering, cut the base off, and remove hard outer leaves.

Bring a steamer pot to a boil, and parboil the sprouts for six minutes.

After they cool, cut them into quarters.

Mix the sprouts with a bit of oil, not too much, and plenty of salt and pepper.

Spread them on as many baking sheets as necessary (do not crowd--keep to one layer) and roast them in a hot oven (350 to 400, it doesn't really matter) for about twent minutes or so. Watch that they don't burn on the bottom. Stir and move around maybe once, with a spatula. Cook until they are done, and no longer. You don't want them mushy, but you do want them browned.