Home Archives About
Crispy Chorizo, Quinoa, and Sweet Potato Salad
How Do You Get Kids to Eat New Things?

Turnip, Who Knew? A Response to Hedonic Adaptation 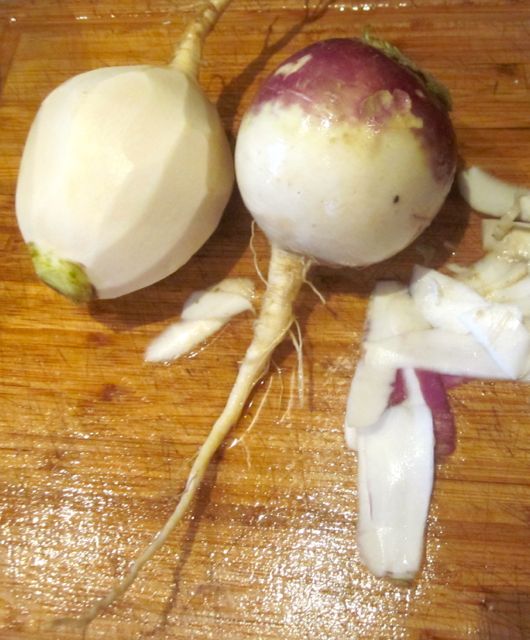 I’ve fallen into a good groove these days by cooking a big, one-pot dish on the weekends. This way I get multiple meals out of one session of cooking. Typically, these are stews and the like—things that use a cheap cut of meat and usually involve a large number of unattended hours at the stove. I have a few recipes—tagine, chili, coq au vin—under my belt, but I need new ones. So I’ve been looking around, and as it turns out, that can be good for a relationship.

This Sunday, The New York Times had an article about how to keep a marriage strong in the face of a common fact of life called hedonic adaptation—which more or less means that no matter how good we have it, we’re designed as humans to get bored. The article was actually called “New Love: A Short Shelf Life,” but I’m a glass-half full kind of guy, at least when it comes to the kitchen.

According to the article, there are ways to counter the risk of getting bored and falling victim to the wandering eye. “Injecting variety and surprise into even the most stable, seasoned relationship is a good hedge,” it says. “Key parties — remember “The Ice Storm”? — aren’t necessarily what the doctor ordered; simpler changes in routine, departures from the expected, go a long way.”

When I was looking for a new one-pot dish to make this weekend, I consulted a cookbook called “Tasty,” by Roy Finamore, who is a longtime cookbook editor. Finamore's tastes are pretty trustworthy, and I wanted to see what he had going for a lamb or pork stew. I found a recipe in his book for a white bean and lamb dish, with turnips in it. The turnips caught my eye. I love turnips, yet I usually only eat them on Thanksgiving.

I showed the recipe to Santa Maria, and she was skeptical of the turnips. She didn’t like them, she said, but she trusted me enough to try the dish.  And while I was inspired by Finamore’s recipe, I didn’t make the dish anything like his, other than some of the seasonings. He made it with lamb chops, put a breadcrumb crust on it, and finished it in the oven. I used leg of lamb (which happened to be cheaper), skipped the breadcrumbs, and did it all on the stovetop.

Boy, am I glad I made it. The turnips were a delightful surprise. Midway through the dish, when I browned them in the lamb fat they filled the kitchen with an unusual, mouthwatering aroma, and later as we ate the dish they added a rich dimension to the it. The best thing about them, however, was that Santa Maria discovered that she liked them. She went back for seconds, and sought them out in the pan. “Turnips,” she said the morning after, “Who knew?”

In a large casserole, brown the lamb cubes in some oil. Salt and pepper them to taste. Work in batches so you don’t crowd the pan. After the cubes are browned, remove them from the pan and set aside in a bowl.

Once they are browned, remove them from the pan and set aside in the bowl with the meat.

Sweat the onions and the carrots in the casserole until the onions are just starting to turn brown on the edges. At least ten minutes.

Add the garlic and rosemary and cook for about a minute more.

Add the meat and turnips and turn the heat to high.

Add the wine, and boil off the alcohol.

Add the tomatoes and the stock and simmer on a very low heat, covered, until the meat is completely tender, one or two hours more depending on the cut.

Add the beans and cook about ten minutes more.

*I used turkey stock because that’s what I had around the house after Thanksgiving. Make sure there’s enough liquid to cover the meat as it simmers. The sauce will not be thick in the end (which was fine with Santa Maria, and hence with me). If you want a thicker sauce, consider making a roux, though I can’t rightly tell you when in the steps to do so.

**About the beans: I started with just over a cup of the dried ones (it was half a pound in the store) and I cooked them ahead of time in about three times their volume in water. I did not presoak them. I cooked them until they were done, about an hour, which was faster than I expected. You will probably need to allot about two hours for this step, but as I learned the rate at which dried beans cook can vary considerably.