Home Archives About
The Case of the Orphaned Pot Roast
Merry Christmas!

The Strange Case of the Pinotage 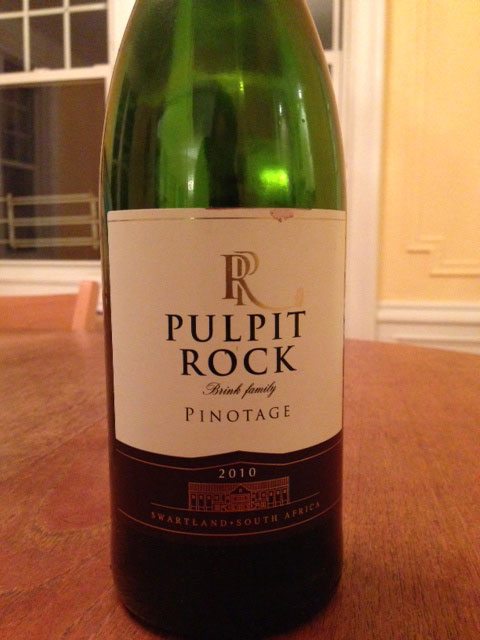 Recently, I received a gift credit to Lot18, a specialty wine-sale site. I like wine well enough. I have my tastes, and they lean towards Spanish reds and New Zealand Sauvignon blancs. Partially this is because of cost, and partially this is because of cost. Let’s just say that I’ve become very good at finding cheap wines that don’t embarrass the palate. If I had my druthers, of course, I’d be drinking Brunellos on weekdays and first-growth Saint-Émilion on Saturdays. Or vice versa. I think you get it.

So about that gift credit to Lot18. It was for $50, and I was excited to use it. I thought I might pick up a nice bottle of Bruenello, but with shipping charges, etc, and their policy of pairing wines, there wasn’t much I could find for $50. So I held on to it, until they ran a promotion, with a mixed batch of four or six wines for something like $40. I leapt at the chance. I didn’t really care what I was getting. I trusted them to send me something half decent.

Half is about right. I opened one the other night, a 2010 Pulpit Rock Pinotage. I don’t think I’ve ever had a pinotage before, and I doubt that I’ll be rushing out to have one again. The first night I opened the bottle, I found it sharp and strange. It was cutting on the tongue, and almost, I would have to say, a bit bubbly, but not in a Champagne dreams kind of way. The wine did improve by the following night, so maybe all it needed was a little air, and I started to wonder, “what is this pinotage.” Later, I discovered, according to wine-searcher.com:

Pinotage is a red wine grape that is almost exclusive to South Africa, although many South Africans shun the variety because of its polarizing, 'un-European' flavor profile and the care it requires both in the vineyard and the winery.

Created in Stellenbosch in 1925, Pinotage is a crossing of Pinot Noir and Cinsaut. The 'Pinot' half of the name was given priority because of the prestige associated with Burgundy's great red grape. The 'age' part was taken from the end of Hermitage, one of several local names for Cinsaut; its position at the back end of the crossing's name reflects Cinsaut's lowly status compared to Pinot Noir.

Santa Maria and I don’t drink all that much wine around the house, but when we do, Nina and Pinta take a great interest in it. Maybe I should say that they take a great interest in whatever it is that I’m drinking. They always want to taste it, and I often let them put their finger in the glass. I've also started to teach them how to sniff the wine. That first night, taking their cues from my reaction to the wine, Nina inhaled and said “It smells like a Sharpie marker.”