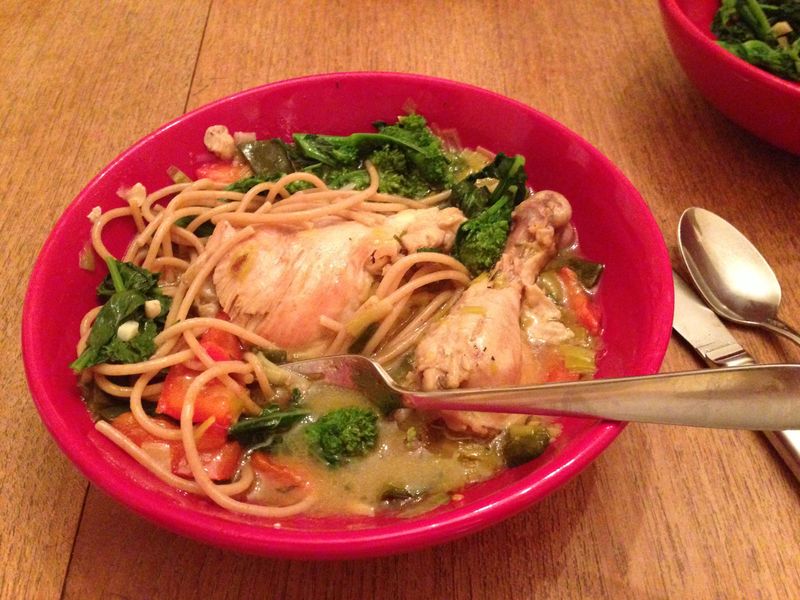 A few days before Christmas, we were getting ready to go to the grand-parents’ house, and I needed to empty out the fridge. I looked through what I had in stock and got ready to make dinner, well aware of one other complication—my Jenn-Air oven still did not work. Therefore, I needed to come up with something that I could make on the stovetop.

I always shop as if the Mayans would be right (I often think it’s the end of the world, and can make Chicken Little seem like the paragon of calmness), so I had more than few things on hand that I needed to either freeze, or eat.

A chicken that I had bought earlier in the week was on the top of that list. I always have cans of peeled plum tomatoes in the pantry, so I first thought of Chicken Cacciatore. The thing is, though, that I have never had a Chicken Cacciatore that I liked. I looked it up online, and found out that Cacciatore means many things.

To the Pioneer Woman, it’s a dish with mushrooms, peppers, turmeric, and other spices. To Wikipedia it’s even more broadly based. I clearly needed a higher authority, so I consulted Marcella Hazan.

In her “Essentials of Classic Italian Cooking,” she describes this dish the following way: “cacciatore means hunter’s style, and since there has always been a hunter in nearly every Italian household, every Italian cook prepares a dish with a claim to that description. Making generous allowances for the uncounted permutations in the dishes that go by the cacciatore name, what they generally consist of is a chicken or rabbit fricassee with tomato, onion, and other vegetables.”

I was more than willing to add to the “uncounted permutations in dishes that go by the cacciatore name,” so I started to improvise. I also had in the pantry one red-bell pepper, one poblano pepper, and three large leeks. I used those, and as everything came together in the pot, as I caught the scent of the peppers, leeks, and wine cooking down, I realized I had a good dish going. I didn’t want to mess it up by adding too many ingredients, so I left out the tomatoes. And thus the Everything But the Kitchen Sink “Cacciatore” was born. I put “Cacciatore” in quotes, because without tomatoes, it probably doesn’t qualify as that kind of dish, but I want to pay tribute to its origins.

In a large Dutch oven or other heavy-bottomed pan, heat a bit of olive oil.

Dredge the chicken pieces in flour and brown then in the pan, working in batches if necessary (don’t crowd the pan), and set the chicken aside once it is browned on both sides.

If there is a lot of fat in the pan, pour some off before starting the next steps.

Sauté the leeks and peppers until they soften a bit.

Add the garlic, and cook another minute or so.

Add the wine and cook another thirty seconds or so.

Return the chicken to the pan.

Add the stock and the thyme and bring to a boil.

Cover and reduce to a simmer.

Simmer about 30 minutes or until the chicken is cooked through.

Note: I served it over pasta and with a side of Broccoli Rabe, and I took some of the greens and put them in the bowl, as in the photograph above. The bitterness of the rabe was an nice counterpoint to the relative sweentess of the peppers.