Home Archives About
Broken Oven is Giving me the Hungry Blues
Just Relax, and Try to Smile 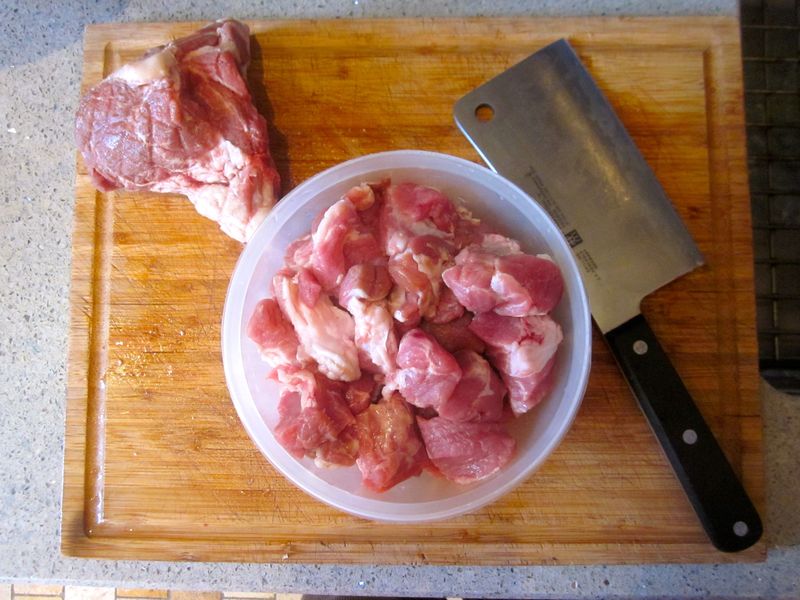 As I mentioned recently, I’ve been cooking big one-pot meals on the weekend, and I’ve been eating them all week. Often, there’s still some leftover that I can put in the freezer. When the oven broke on Friday, I dipped into the stock of a Mojo-Marinated Pork and Black Bean Stew that I had on hand.

I first made this stew a few weeks ago because I had a big cut a boneless pork shoulder in my freezer that was getting in the way of things. At that time, my oven wasn’t working properly, and I wouldn’t have been able to cook it properly at a low heat (the oven was only going down to 350 at that point). So I looked for a recipe that I could do on the stovetop.

A while back, a publicist sent me Emeril Lagasse’s “Sizzling Skillets and other One-Pot Wonders.” In it, I found a recipe for Mojo-Marinated Pork and Black Bean Stew. It sounded delicious, and all I had to do was cut up that pork shoulder. Lagasse says in the head note, “Who can resist the quintessential Cuban flavors of citrus, oregano, and garlic with pork and black beans?” Good question, though I don’t know how Nina and Pinta did with it. I was not home the first night it was served, and I did find a lot of it leftover after that night. This was a good thing, I tell you. You want leftovers from a dish like this. They come in handy when the oven breaks.

Combine the orange juice, lime juice, lemon juice, smashed garlic, 1.5 teaspoons of the salt, the ground pepper, and the oregano in a small bowl, and set aside for about fifteen minutes to let the flavors come together. Add the pork and toss to coat well. Transfer the mixture into a gallon-sized zip-lock bag and close, squeezing out as much air as possible. Place bag in a shallow baking dish and refrigerate overnight, turning at least once.

Remove the pork and discard the marinade. Pat the pork dry and make sure to remove the chunks of garlic lingering on the pieces of meat.

Heat the vegetable oil in a heavy Dutch oven, and working in batches, cook the pork until it is browned on all sides. Remove the meat to a bowl and set aside. Discard all but two tablespoons of fat in the pan.

Add the onion and sweat it for about five to ten minutes. Add the bell pepper, poblano, and minced garlic, along with 1 tablespoon of the cumin, 1.5 teaspoons of the dried oregano, and ½ teaspoon of the thyme and continue to cook until the onions are a bit brown.

Add the wine, stir to get any browned bits up off the bottom of the pan, and add the stock, and the bay leaf and bring to a boil. Add the pork and cover. Cook at a simmer for thirty minutes.

Add the remaining cumin, oregano, and thyme and stir to combine. Continue to cook on a low heat, partially covered, until the pork is tender, about 1 to 2 hours. Add the beans and serve over rice.

*I bought fresh oregano, but lost it on way home from the store. Use fresh if you can.

**I don’t bother to soak black beans anymore. I just cook them in about three-times their amount in water until they are done, about an hour or two, depending on the age and temperament of the individual beans. For this recipe, I ended up using slightly less than all the beans in the end.

Additional Notes: About those beans. Lagasse says soak overnight and then add to pot about an hour or so before finishing cooking (after the 30 minute boil, when adding the last of the spices), and I suppose that would work well too.

Lagasse’s recipe calls for 1 cup of chopped tomato to be added at the end, but because of a miscommunication with Santa Maria, we didn’t have any tomatoes in the house. The dish is fine without them, but is probably better in the end. They are to be stirred in at the very end, just before serving. Along with 2 tablespoons of chopped fresh cilantro.