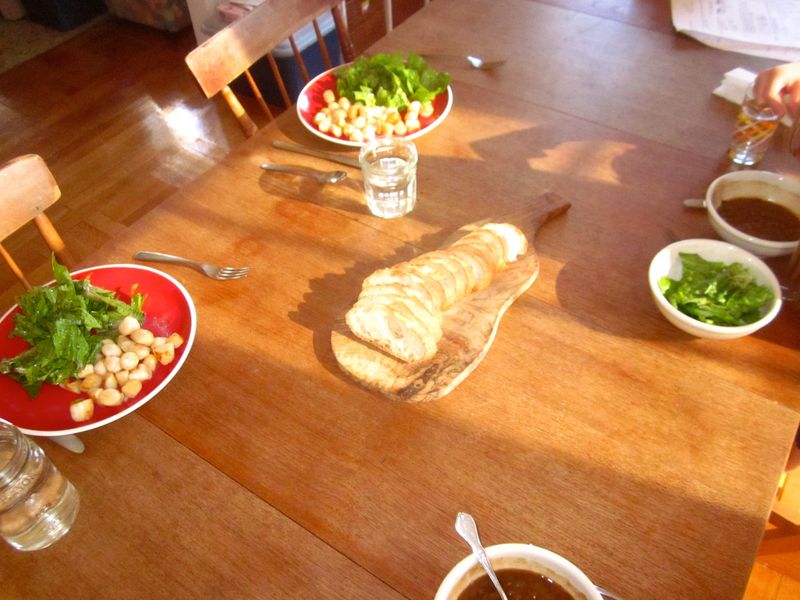 I’m knee deep into Sam Sifton’s “Thanksgiving: How to Cook it Well,” but thus far my holiday prep has had more to do with buying tables, washing folding chairs, and counting cutlery than cooking.

As this is my first time hosting for the holiday, I’ve taken a few days off work to get ready (It’s good timing, because things are slow this week in the office), and yesterday I spent the afternoon wandering the wilds of the Brooklyn Home Depot to find a good deal on a folding table. I succeeded, but, boy, was it an education. Not so much for me, but for Pinta, who came with me. That store was was full of angry contractors cursing out folks on the phone as they stormed around the aisles. Unbelievable. I think five-year-old Pinta’s vocabulary has grown quite a bit.

As this is supposed to be a cooking/parenting blog, not a shopping-for-tables/parenting blog, I’ll get back on topic. And this is important, because Peconic Bay Scallops are in the midst of their short season.

On Saturday, I was at the Greenmarket, buying fish from Blue Moon, my favorite purveyor. They were selling the little scallops, which are a rare seasonal delight that is not to be missed. They are the sweetest, most divine scallops you can imagine. So, for nearly the price of a new table, I bought a pound, and cooked them up for lunch. If you see Peconic Bay Scallops in the market near you, I suggest you grab them while you can. The season doesn’t last long.

Dry the scallops on paper towels. Bring them to room temperature if you have the time.

Heat the oil and the garlic in frying pan that is large enough to hold the scallops without crowding. With your spatula, move the garlic around as it is heating.

Get the pan good and hot, nearly smoking. Remove the garlic if it starts to brown (which it will).

Once the oil I just about smoking, toss in the scallops, being careful not to crowd the pan.

Leave them alone for three-or four minutes, or until they get a nice crisp finish on one side.

Move them a bit in the pan with a spatula to cook the other sides.

Remove from heat and serve.