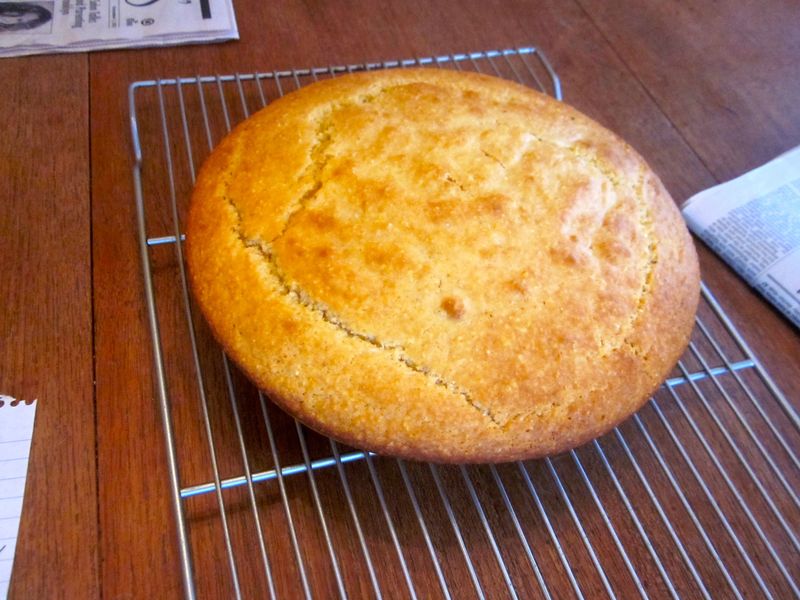 Halfway through the Thanksgiving meal—after cooking for three days, downing a glass and a half of champagne, and about halfway into a glass of a silky 2005 Barolo—I found a half-baked aphorism on the tip of my tongue. “Much like family,” I said, “I didn’t understand the appeal of hosting Thanksgiving until I had one of my own.”

I have never, ever, ever—in all the years I’ve been cooking and entertaining, through all the people I have fed and meals I have made—never, ever, ever had so much fun. I wasn’t even that big a fan of turkey, cranberry sauce, dressing, and all the fixings. But after I smelled my kitchen filling with the scent of the turkey roasting, after so many of my siblings and their families came over, and as we sat at the long, T-shaped table I assembled from the Home Depot special and my regular dining room table, I understood.

I do have a confession to make, however: I didn’t do the whole thing on my own. All of my siblings contributed something to the table, and my mother came to visit for the three days prior and she did much of the chopping, and the planning, and the hand-holding. She did everything from making the turkey stock to filling the salt and pepper dishes. She was the mortar between the bricks; without her the holiday could not have stood.

Most everything went swimmingly with my mother, except for one thing. Almost every time I consulted Sam Sifton’s book, “Thanksgiving: How to Cook it Well,” she rolled her eyes. Well, she didn’t actually roll her eyes, but she didn’t like it. And the day after the holiday, on the phone with me, she made her opinion clear. Addressing my tendencies towards perfection (in parenting and in the kitchen) she said of the book, “I would just throw it out.”

What was it that irked my mother about Sifton’s book? An inkling comes from Emma Allen’s recent New Yorker blog post about cooking a meal according to its directions. She accuses Sifton of being a kitchen bully, of scolding and hectoring her with his instructions.  I’m not saying that I know of any other kitchen bullies, who might hector or scold, but I will admit to the apple not falling far from the tree.

The truth is that Sifton’s book is amazing, and full of great recipes. The same, of course, is true of my mother, but that goes without saying. One thing my mother did agree with Sifton about was the cornbread that we used as a base for his Three-Pepper Sausage Cornbread Dressing, of which Sifton says, “Rare is the month where there is not a frozen bag of this stuff in our freezer, ready to be deployed.”

The dressing was remarkable, but in our house we’re less likely to have it as much as we are to have the cornbread base. On it’s own, this cornbread stands tall. It is perfectly crunch, soft and crumbly. It will become a regular part of our cooking, I can tell. In fact, I made another batch today, to go with some chili tonight.

Preheat oven to 350 degrees. Lightly oil a 9-inch cast-iron skillet and a 4x8 loaf pan. Place the skillet in the oven to heat. The loaf pan can remain room temperature.

In a large bowl, sift together the flour, cornmeal, sugar, salt, and baking powder. In a separate bowl, whisk together the eggs, milk, and oil. Combine the wet ingredients with the dry ones in the dry ingredient bowl. Stir until mixed through, and no more. Add the butter and stir again until it is all mixed together.

Remove the hot skillet from the oven and fill it with the batter. Put the remaining batter in the baking pan. It should fill it about half way.

Bake in the oven for about 40-45 minutes. Test for doneness by inserting a sharp, thin, knife into the center. It should come out clean. Cool on a rack (or better yet, cut some slices, slather with butter, and enjoy).

*As for cornmeal, I suggest (and Santa Maria insists upon) Bob’s Red Mill, coarse ground.

Note: This recipe is adapted from Sam Sifton’s “Thanksgiving: How to Cook it Well”; Sifton in turn adapted his recipe from Chris Schlesinger’s East Coast Grill. Sifton added frozen organic corn (1 ten-ounce package, for those who want to try it—Sifton says mix it in just before the butter). I in turn, omitted the corn, so I guess I’m back at Schlesinger’s recipe, though I did cut the sugar by a third.