Home Archives About
Can Happiness Be a Habit? Does the 30-minute Meal Exist? Am I Joking Or Am I Serious?
Turnip, Who Knew? A Response to Hedonic Adaptation 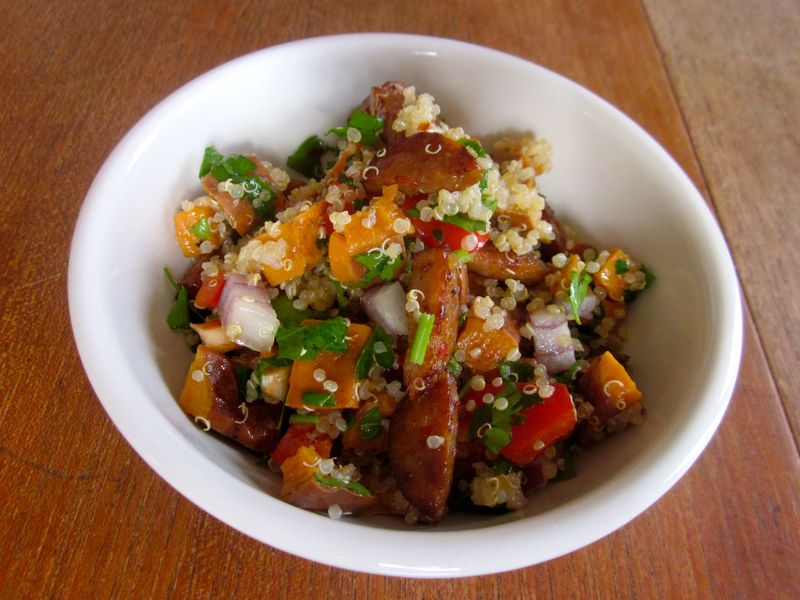 Sometimes cooking can be so easy that it boggles my mind. Take tonight’s dinner, for example. I simply brought together something from a new recipe and added it to an old recipe, and voila, I had a smashing new dish. Okay, it wasn’t completely, 100% new, but, then again, what actually is new? Is anything?

I took the crispy Chorizo sausage from my friend Aran Goyoaga’s sublime Brussels sprouts, sausage, pear, and black quinoa salad, and added it to my sturdy old sweet potato and quinoa salad. It was that easy.

The result was satisfying and delicious. I’ve always liked my quinoa salad, but I often felt it didn’t have enough heft. The Chorizo solved that problem on two accounts. It added a touch of spice and it added a huge hit of protein. Easy, I’m telling you. Go try it, and see for yourself. You’ll be happy you did.

Preheat the oven to 350 degrees.

Cook the quinoa in 2 cups of water as you would cook rice, about twenty minutes. Set aside to cool.

Cut the Chorizo sausages in half lengthwise, and then cut into ¼ inch thick half moons. Add a little bit of oil to a large frying pan over a medium-high heat and crisp up the sausages on one side. Flip and crisp on the other. Drain on paper towels and set aside.

Chop the sweet potatoes into small squares, about a half inch each. Coat with a tiny bit of olive oil, salt and pepper, and spread out on a baking sheet or in a large frying pan and roast in the oven until the potatoes are soft on the inside and slightly crispy on the outside, about twenty to twenty-five minutes.

Toss all the ingredients, including the sausages, and dress with the oil and vinegar.

Notes: Dress only as much of the salad as you would like to eat in a given sitting. The remainder of the salad will keep for days, so long as it is not dressed before consuming.

*Crisp up only as much Chorizo as you might like to consume in that setting. Figure one to two sausages per person (though that’s what I eat, and I eat a lot more than most folks).

This recipe makes about five to eight servings of the salad, depending on how large each serving is. Just keep in mind that it makes a lot of salad.