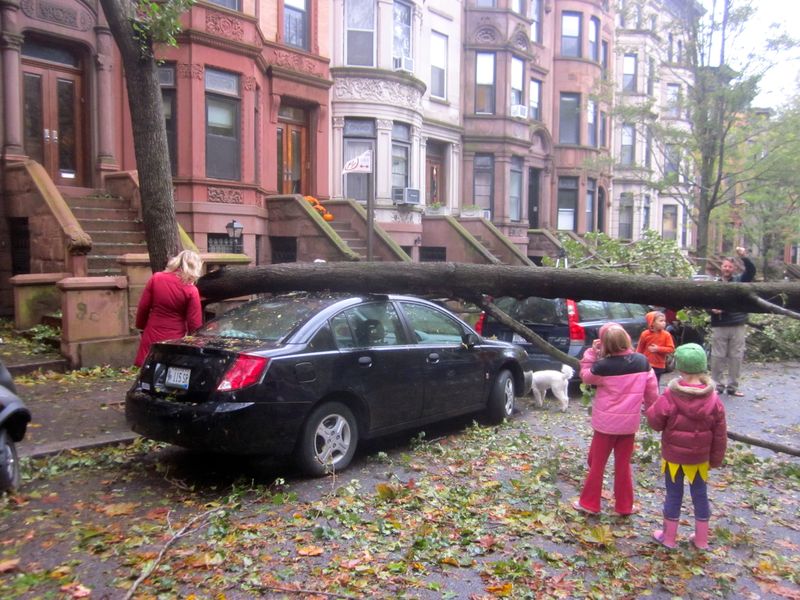 Before New York City was turned upside down by Superstorm Sandy (a name that sounds too-cute-by-half for the havoc it wrecked up on the area—that’s a minor bit of damage pictured above), I bought a package of chorizo to make the Warm Roasted Brussels Sprout, Black Quinoa, Pear, and Crispy Chorizo Salad, from Aran Goyoaga’s gorgeous cookbook, “Small Plates & Sweet Treats.”

I used a link of the chorizo for that salad, and, according to her directions, I crisped up the slices of sausage in the pan. I would not have thought to do that, and I was glad I did. When I was making that salad, I decided to cut the links in half moons—to spread the spicy sausage flavor around. That worked very well too.

A few nights before the hurricane, Santa Maria offered to make dinner. She asked what we had in the kitchen, and I mentioned the chorizo, and pointed out that we also had some broccoli on hand. I thought the two would go together well with a pasta. She rejected that, but then about forty-five minutes later, she came up to me and said that she had given dinner some thought and that she had come up with a really great idea.

She said she could combine the chorizo with broccoli and make a pasta. “Huh?” I said, “That was what I suggested just a few minutes ago.” “Oh,” she said, “You’re right.” “This is just like working in corporate America,” I said. “In order to get anything done by a higher up, one needs to suggest a number of things that will be rejected, and until the higher up comes back with his or her great idea—that just happens to be one of the original suggestions….” Santa Maria laughed, and we went on to make dinner.

Combining the chorizo with the broccoli was a no brainer. Last year, based on an article I had read in Bon Appétit about making better pastas, I refined that haggard old weeknight standard of broccoli and pasta into something very nice, albeit something a little light on protein.

All I needed to do was to add the chorizo, and that problem would be solved. I had no idea that chorizo would make it so delicious. I carefully cut the links into skinny half moons, and crisped it in a frying pan. The sausage is a bit oily for my tastes, so I put the crisped pieces on paper towel to reduce the oil, but that is optional.

The chorizo gave the dish a sharp and spicy kick, and gave it sufficient heft to fill me up. And another nice thing about chorizo is that it keeps in the fridge for a long while, so it’s a good staple to have on hand. If I can muster enough post-Sandy energy (I’ve been biking back and forth to work), I’ll write about the other ways I’ve been enjoying the chorizo. It works its magic with other things. Until then, here’s the recipe for what I’m sure will be a new part of the rotation around here.

Put the pasta water on to boil.

Cook the pasta to within about a minute of being finished (a little white inside is perfect) reserving the cooking liquid.

Steam the broccoli until it is tender but firm; set aside.

In a bit of olive oil in a large pan sauté the onions until they are translucent, at least ten minutes. Remove and set aside when they are done.

Once the sausage is crisp, remove from the pan and set aside on paper towels to remove some of the oil.

In the same pan, sauté the garlic and peppers.

Once the garlic is soft and about to brown, add the onion, crispy sausage pieces, broccoli, and a bit of the pasta water.

Add the pasta and continue to cook until the pasta is finished, about a minute longer (add more water if it starts to stick).

Turn the heat off and finish with the cheese. There should only be a bit of liquid, and the strands of pasta and the broccoli should all be coated with it nicely.

Here's a picture of the finished dish. It tastes much better than it looks: 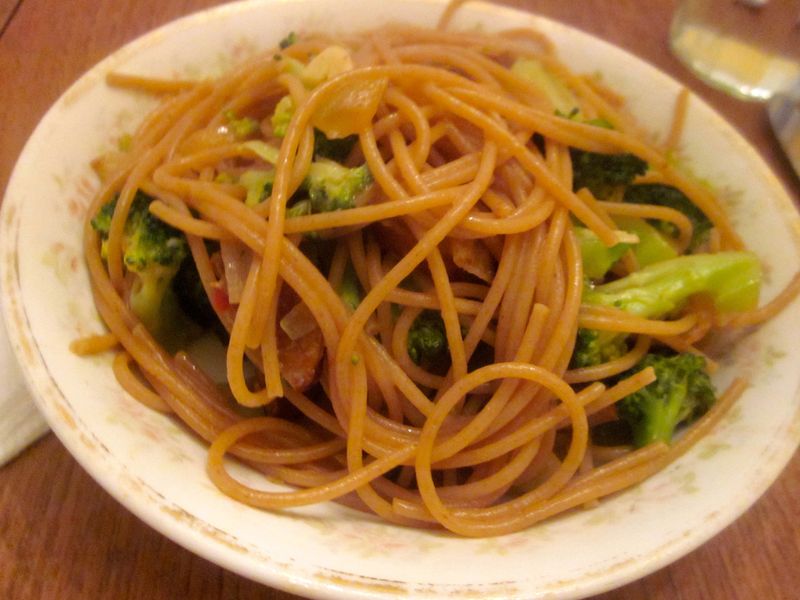