Home Archives About
Stunned by Gumbo: The Follow-Up
Salmon, A Bit More of the Story 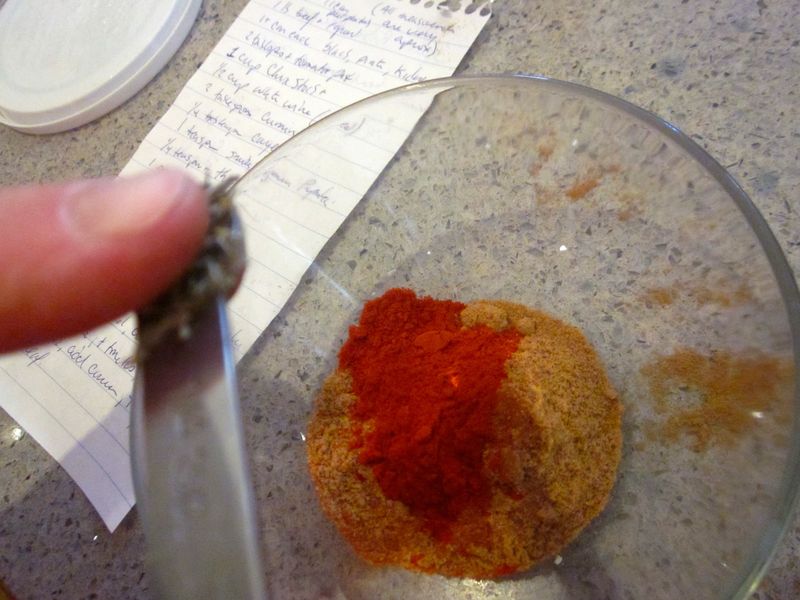 I didn’t spend much time in the kitchen before Santa Maria and I had children, but I did like to cook from time to time. It was an era of seductive dishes—sautéed soft-shell crabs, flaming Provencal beef daubes, and Moroccan pigeon pastillas—that I have had little time for in recent years. As my children start to grow up, though, I getting my life organized a little better, and I’m starting to return to some of the dishes of our early married life.

One of them—an intensely mouthwatering and faintly smoky three-bean-and-beef chili—happens to be somewhat well suited to life with children. I was willing to bet that they would eat it, given that it has many similar components to what my girls like to eat already—ground beef and tomatoes, for example, are akin to their beloved Bolognese and the black beans speak for themselves.

The other reason that it’s well suited for life with children, is that it can be made in large batches. The pot I cooked up last Sunday lasted us almost all week, if various lunches and last minute dinners were to be included. I love any dish that can do so much work around the house.

But let me get back to the flavor. This chili is a little different than most chilis that I’ve had before, because I make it with Spanish paprika that has a rich smoky flavor. The paprika is the key ingredient, so don’t omit it. I used a dulce Spanish paprika, because I didn’t want the chili to be too hot. If you want it spicy, try a picante one (The Kitchn has a good explanation of various paprikas), but whatever you do, make sure it’s a smoky one.

I made the dish on a Sunday, with the intention of serving it the following night. It was to be the first time that Nina and Pinta would be trying it. I was a bit anxious about how it would go, but I tried to remember one key thing about getting kids to eat new foods—they won’t starve if they don’t eat it.

I thought about talking up the dish’s similarities with the things they have had before, but I decided against it. Sometimes, you just have to let the dish speak for itself. I got the usual protestations, but they were surprisingly muted. I’d set the table with some toppings—a generous bowl of grated cheddar, some sliced scallions—and Nina put copious amounts of cheese on hers as she ate it. I thought she might be eating more cheese than chili, but that was fine by me. Pinta didn’t want to bother with it much at all, and let her eat rice and butter, and she was fine, too. As for me, I was able to savor the flavor, relax, and enjoy the meal.

In a bit of olive oil, sauté the onion, bacon, carrot, and celery, until the onion is soft and the bacon fat rendered.

Add the garlic and sauté a moment more.

Add the beef and cook until brown, breaking it up with a wooden spoon (or a potato masher).

After the beef is browned, add the wine, and reduce.

Add the chicken stock, tomato paste, canned tomatoes, beans, and all the spices and herbs.

Bring to a boil and simmer as long as you feel like it. It doesn’t need much more cooking at this point.

Salt and pepper to taste.

Serve with rice, garnished with grated cheddar cheese, sliced scallions, cream cheese, and/or any topping of your choice.

Here's a photo of the finished dish: 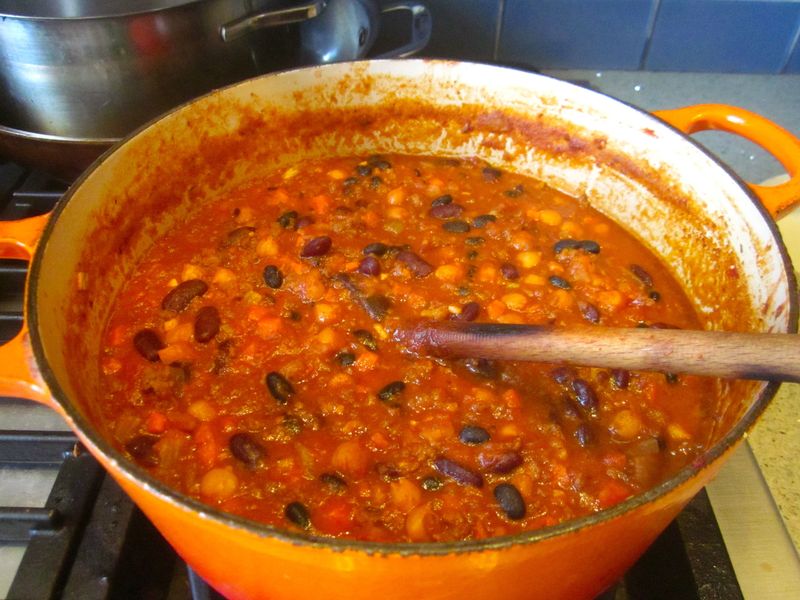