Salmon, A Bit More of the Story 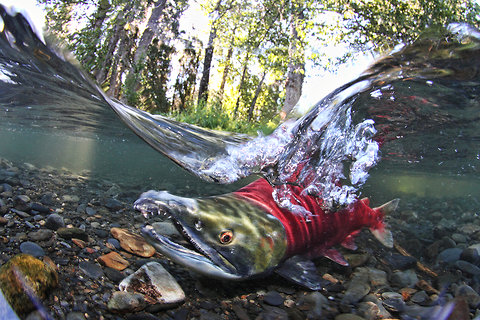 I learned a great deal about salmon on my recent trip to Alaska. Some of what I learned about I thought that I knew before (isn't every school child taught that salmon are born in rivers, spend their lives in the ocean, and then return to the river to spawn and die?) but book knowledge is one thing, and seeing that process actually happen is another.

There is, for example, the smell. This is nominally a parenting blog, so I feel okay about the comparison I’m about to make. If you’re a bit squeamish, though, and are here just for the recipes, you might want to skip to the next paragraph. On our trip to Sitka, we took a walk along Indian River, which like all the rivers in Alaska during the summer, was full of spawning salmon. We strolled beside rushing waters, past moss-covered trees with roots the size of a Brooklyn brownstone building, and in the swift-moving water at our feet, the spawning and dying were continually taking place. Actually, where we were on the river, close to its mouth, there was less spawning and more dying (many of the fish don’t make it up the river), and the air was filled with a curiously familiar, but slightly unpleasant, smell. The aroma was exactly like that of a pee-filled diaper that has spent too much time in the living-room wastebasket. Ever have one of those days with an infant in the house when you forgot to empty the trash? That’s what the salmon rivers can smell like, as the fish carcasses decay, caught in the tree branches at the water’s edge.

This is not to take anything away from the majesty of the process. In fact, for me, the visceral scent drove home the profundity of the moment. Those salmon were literally dying from the inside out in their effort to reproduce. Watching them swim relentlessly, waving their tails back and forth as they fought the current, made me think that we humans have it somewhat easy (sleepless nights and emergency room visits aside).

It is, in fact, quite beautiful, as the New York Times photographer Seth Casteel demonstrated recently with his underwater shots of sockeye salmon in the Bristol Bay region. If you haven’t seen them yet, you must check them out (the shot at the top of this post is from the series).

After returning home, Casteel conducted an interview with the Times Magazine’s blog, and he remarked upon the difficulties and wonders of being in Alaska:

The biggest challenge of this assignment was to tell the story of this extraordinary journey of the salmon, and also live to tell about it. That sounds kind of dramatic! Alaska is the most amazing place I’ve ever seen, but it occurs to you out there how wild it really is, and the potential dangers lurk just meters away. Hiking through the rain in absolute wilderness with 60-pounds of gear, dangling off slippery cliffs of rock above a rushing 37 degree Russian River, discovering half-eaten salmon along the way, wondering, “Hmm, where exactly is this bear now?” But then the sun comes out, the river slows enough where you can get in safely and you think, “WOW, THIS is quite relaxing.”

Alaska is a magical place, quite unlike anywhere else I’ve ever been. I encourage you to go and visit. In the meantime, the next best thing to going there is to make frozen, sustainable, Alaskan salmon part of your regular repertoire. I’ve been doing so for a while, and I recently improved upon the salmon recipe I wrote about earlier this year. I added scallions, and dropped the egg. It was a simple change that freshened everything up, and made a quick weeknight dinner into something slightly more engaging.

In a large frying pan, sauté the scallions, garlic, ginger, and pepper in a bit of canola oil.

Add the rice, the salmon, the broccoli, and soy sauce, and serve.

For about Alaskan salmon, the environmental threats facing them, and what it’s like to fish those rivers, take a look at my friend Paul Greenberg’s entries on Mark Bittman’s blog, from this summer, “Chasing the Sockeye Salmon Migration” and here.