How to Stretch a Meal 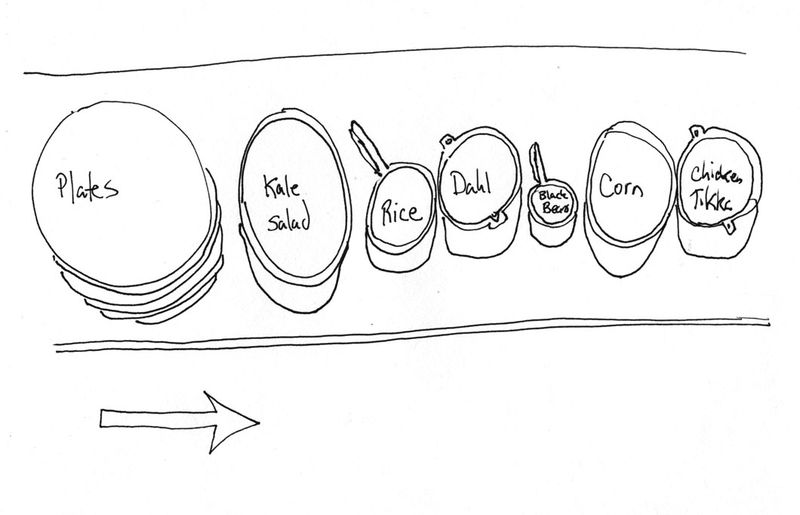 Just the other day, I overheard a friend at work talking on the phone to his out-of-town spouse. He was complaining that his teenage daughter had brought a last-minute friend to dinner the night before, and there wasn’t enough food for everyone to eat. His story made me wish I had put this post up sooner. I know he follows this blog and he might have benefited from a similar experience I just had.

Recently, Santa Maria invited the daughter of an old friend over for dinner. The daughter was fresh out of college and was visiting New York. After a bit of back and forth, she was set to come to dinner one Saturday night. We invited two other friends and their elementary-school-age son over too, to make a bit of a party out of the evening. An hour or so before the dinner, Santa Maria got a text from the out-of-town daughter: she wanted to know if she could bring three friends.

Santa Maria, one of the softest-hearted people this side of the Rio Grande (she married me, after all) told her “yes,” and said to me, “what can you say in a situation like that?” In the interest of marital harmony, I kept my response to myself.

And just like that, I needed to stretch the dinner I had made, but I wasn’t concerned. A few years ago, something like this would have caused a spike in my blood pressure and have stressed me out, but I've learned a lot since then.The biggest thing I've learned is to stop fighting reality. Plus, I had a few tricks up my sleeve. I was serving corn on the cob, and though I had counted out enough ears for the original group, by breaking each one in half I instantly doubled the amount of corn I could offer.

I took some black beans out of the freezer (the three additional guests, I had been told were vegetarians, though what showed up was two extra meat-eaters and a libertarian) and I carefully arranged the other things I was serving: Chicken Tikka Masala, Kale Salad, and Dahl.

I arranged everything on a counter in the kitchen, for people to serve themselves. I was a bit short on the chicken (times being what they are, especially in publishing, of course), so I put that dish at the end of the line. If people started with the kale salad, then moved on to the rice and beans and dahl, and put an ear (or half an ear as the case might have been) of corn on their plate, they wouldn’t really have any room for the chicken. It worked brilliantly. Everyone was forced to go back for seconds, and the slower people eat, the more full they feel. If I had been really pressed for food, I could also have boiled a couple of eggs and served those, too. That trick worked well this summer.

In the end, I didn’t mind at all that so many people showed up. In fact, I reveled in it. It’s not often that I get to eat with some bright young people with such wide political leanings. I was honored to feed them. As always, youth must be served.

Pour the can of tomatoes into the blender, and puree.