Party Time: How to Make Pizza at Home 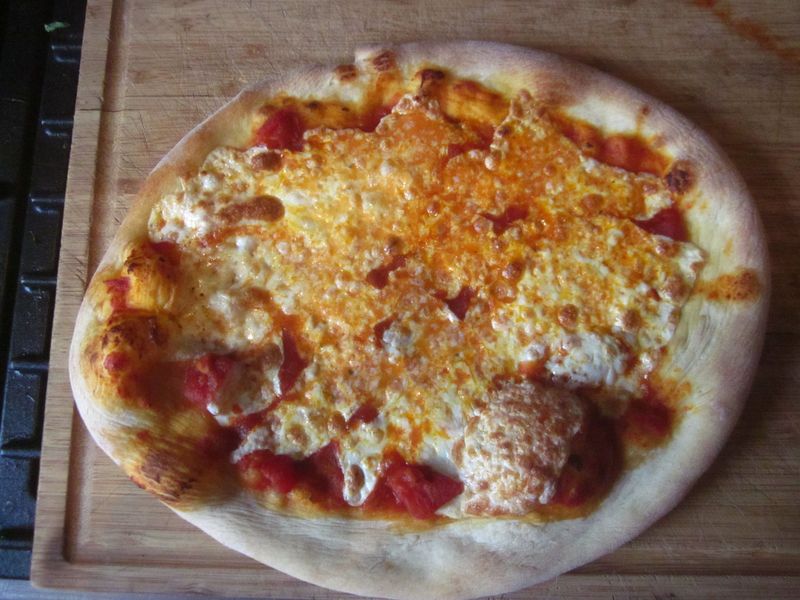 I threw a party recently for Santa Maria’s birthday, and when I throw a party, I can’t help but throw myself into things—by which I mean the kitchen. For this particular party, I made a gumbo (which I hope to write about here shortly) and my signature dhal. I also prepared a cheese course (or, more accurately, Nina prepared a cheese course) and I opened some oysters and served them on the half shell.

I expected more than a few kids at the party (it was in the afternoon, and many of our friends have young children), so I needed to make something that the children might like to eat. A few of them might try the gumbo, perhaps, and my children actually eat the dhal, but in general those dishes lack, how shall I put it, kid-appeal.

Lately, I’ve been experimenting with making pizza at home, and in preparation for this party I hit on the perfect combination of ingredients to make a kid friendly pizza. The trick, I realized, is to get ingredients that are the cheapest, least-gourmet, totally non-fancy, and embarrassingly un-foodie. This is a lesson I learned the hard way. I once made the worst pizza in the world, simply by following a recipe in The New York Times which was far too aspirational for my children’s tastes. They hated the chunks of San Marzano tomatoes, I burned the homemade dough, and that whole effort has since become a legend of failure around our house.

I knew I could do better, though, by trying to do less. And as soon as I switched to dough from a local pizzeria, opted for an off-brand supermarket mozzarella, and spooned out an inexpensive tomato sauce, I got the result I was looking for. The kids loved it, and one of my friend’s sons actually said, as he bit into a piece, “Did this pizza come from a store?” Could there ever be a better compliment?

How to make Pizza at Home

Note: A pizza stone and a peel (the wooden or metal paddle used to slide the pie into the oven) are essential. They’re easily found on the Internet and at kitchen-supply stores.

Put the stone in the oven and preheat it to 475-500 degrees. The hotter the better.

Start with a ball of dough from a local pizzeria. Most will sell you one, and it will be easy to work with. Let it come up to room temperature before starting, and experiment with how much dough to use for your pizza stone. I use one half of the local pizzeria’s ball of dough, so one ball equals two pies.

Flour a clean surface lightly and stretch the dough out by pushing it with your fingertips or using a rolling pin. Once it is a little wider and flatter, pick it up and stretch it with your hands. Keep your fingers curled under, so you don’t poke a hole in it, and throw it in the air if you’re feeling adventurous (or, if like me, you want to relive your foodservice-work college days).

Spoon a bit of sauce, less than you think it might need, onto the dough and leave about a half-inch border around the edge for the crust.

Sprinkle grated mozzarella on top of the sauce, and slide it into the hot oven. Let it cook for about ten minutes, or until the cheese is bubbly and brown, and the bottom of the pie is crisp.

Cut, serve, and enjoy. Then repeat.