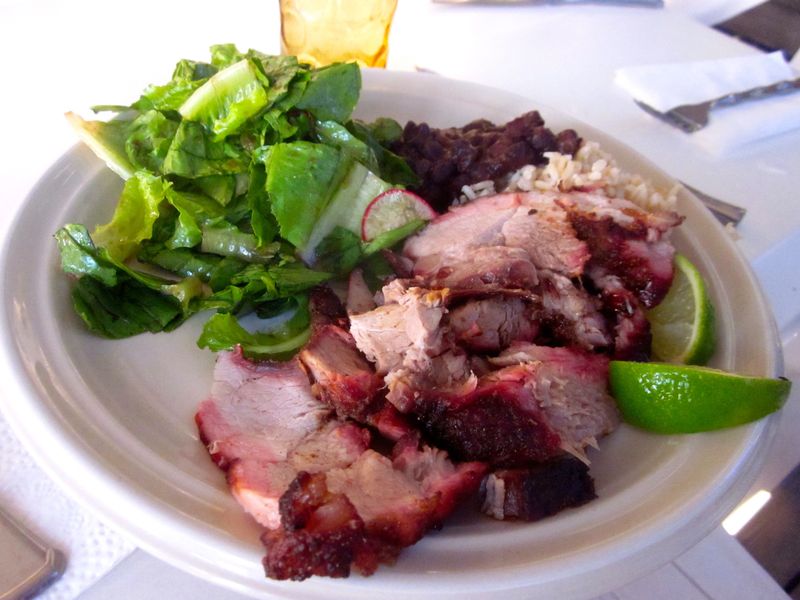 On our recent trip to the New Jersey shore with my extended family, I took responsibility for cooking for the gang a number of nights. In cooking for a big group, there’s always the issue of balancing cost and flavor. Sure, I’d love to serve rib eye steak to everyone, but I’d also like to be able to send my kids to college. The more mouths, the bigger the bill.

Over the years, I’ve learned that a slow-roasted pork shoulder comes in handy at times like this. It is a delicious and cheap cut of meat that’s easy to cook and is perfect for a big group. The only thing you need is some time. It can take about five hours to cook, but most of that time is unattended, leaving plenty of opportunities for swimming and hanging on the beach.

This recipe uses a simple spice rub and mesquite chips to give the meat a killer flavor. I first made it in July of 2004, when we were in a rambling home in Cape May. Mark Bittman wrote it up in the New York Times Dining section that week, and I was inspired to fire up that home’s superb gas grill. I cooked that shoulder all day, and I’ll never forget its salty, spicy, and sweet flavor. My mother’s comment sealed the deal for me. “It’s so fatty,” she said. “Yes,” I said, “It is.”

This time, at the run-down home on Long Beach Island, I was working with a gas grill that looked like it had survived a few hurricanes. Or maybe it had been blown in by a Nor’easter. It had three burners, but the controls were a bit shaky and its thermometer looked about as reliable as certain famly members of mine. I couldn’t get the temperature down to the low 300 degrees the meat is supposed to roast at. The grill’s thermometer kept creeping up past 400 degrees.

I tried turning the burners off. I thought about opening the top, but that would let the smoke out. I was getting close to being a disaster, but then I realized that the grill’s thermometer couldn’t be trusted. Maybe its 400 was really 300. When I was roasting those sublime chickens a few nights before, it told me that the temperature in the grill was 500 degrees. Thinking back on the way the chicken cooked up, I realized that the it probably hadn't been that hot in the grill. And, “What the hell,” I thought. “I’m on vacation.”

I let that meat cook for about five hours at what the grill was calling 400 degrees. I didn’t trust it, and the meat confirmed my judgement; it turned out fine. The truth is the pork shoulder is a forgiving and durable cut of meat, which, by the way, are the same qualities that make a good spouse, in case you're out there looking.

Other than the amazing flavor, the best thing about the dish is its cost. I fed about fifteen people for less than $27 dollars. The meat was about $17; and the rice and beans and salad I paired it with couldn’t have cost more than $10. Down in that part of Long Beach Island, one entrée at just about any restaurant runs more than $30, so I knew I was coming out ahead.

Soak the chips in water for about a half hour before cooking.

Mix together the dry ingredients and rub the mix all over the pork shoulder, working it into all the nooks and crannies.

Using a gas grill, heat all burners for about fifteen minutes to clean grill (this is a rental-house tip).

Turn off two of the three burners, or do what is necessary to get the heat inside the covered grill down to under 300 degrees.

Put the chips in a tinfoil pan and set it over the burner that is on.

Place the meat on the cooler side of the grill and cover. Keep an eye on the grill to make sure the chips are smoking (and if they’re not, don’t sweat it), and that the heat in the grill is under (or around) 300 degrees.

The pork is finished when the internal temperature reaches 190 degrees. This will take four to six hours. I could only get portions of the meat I cooked at the shore up to about 180, and it was fine. I think the longer it cooks, though, the more tender it will get.

I let the meat sit for about ten minutes after I took it off the grill, then I hacked it into small bits. I served it with rice and beans and a salad, but it would work well in tacos or in a sandwich. This, I believe, is the kind of meat made into pulled pork, for example. You really can’t go wrong with this cut.