More on Grits and a Shrimp Grits Recipe 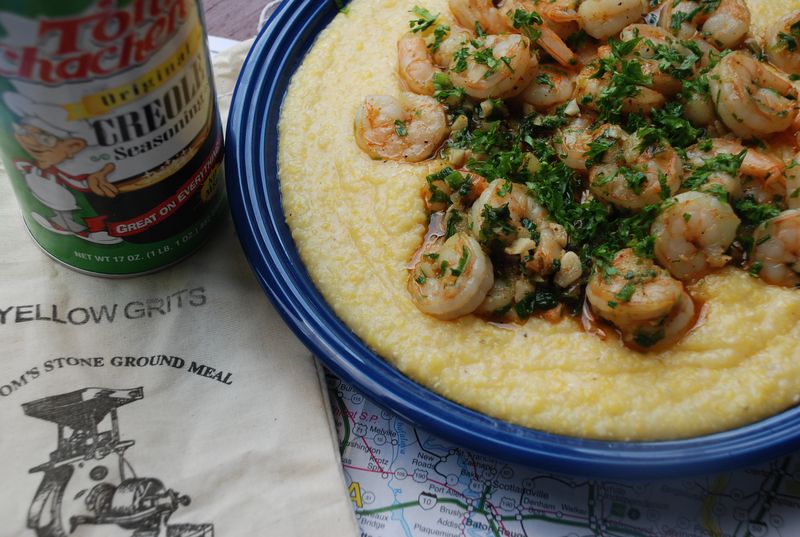 I loved the grits they served at the High Hampton Inn, and I ate them almost every day for breakfast. If I had things my way, I would have eaten them three times a day. I thought they tasted just like polenta, and when I mentioned this to the executive chef, he chuckled at me and said, “But no, they’re grits.” I asked what the difference was, and he said grits were made with hominy. When I asked him about the difference between hominy and regular cornmeal, he chuckled some more and said he had no idea.

According to “The New Food Lover’s Companion,” a nifty dictionary of food items edited by Sharon Tyler Herbst, the term grits “actually refers to any coarsely ground grain such as corn, oats, or rice.” The book points out that it is “commonly used to mean “Hominy” grits.

Hominy, according Herbst, is “one of the first food gifts the American Indians gave to the colonists.” It is “dried white or yellow corn kernels from which the hull and germ have been removed. This process is done either mechanically or chemically by soaking the corn in slaked lime or lye.”

At the High Hampton Inn, they used Adluh Stone Ground Yellow Grits, and I’ve written to them to see what they say about grits. I'll let you know what I learn. In the meantime, my post on Friday about the Southern staple drew a nice reply from a friend of mine in Pennsylvania, Anne Corr. An instructor in the Department of Nutritional Sciences at Penn State, she also runs Cook Like a Chef, a summer cooking camp for kids, and writes for The Centre Daily Times, her local paper.

Her latest article is all about Louisiana cooking, and as it turns out, if she was cooking I could have eaten grits for lunch and dinner too. Here’s her recipe for one of her favorite dishes, shrimp grits.

Place water and grits in a 2 quart saucepan and slowly bring it up to a boil, whisking occasionally until it gets thick, and then vigorously while it boils for a minute. Remove heat and season with salt and pepper to taste and add the butter. Heat 2 tablespoons oil in a sauté pan and add the shrimp when hot. Stir and cook until just pink and firm to the touch. Add the scallions, garlic, parsley and lemon juice and give it a stir. Hit it with some Cajun spice-bam!-if you like. Pour the grits into a large shallow bowl and top with the shrimp. Serve with hot sauce on the side.