A Broken Oven, An Everlasting Meal, and Some Killer French Fries 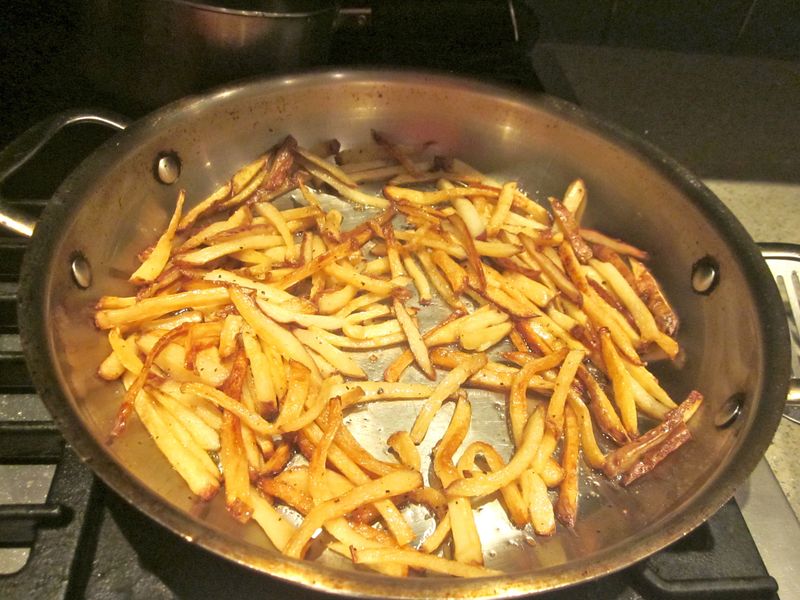 I recently finished an amazing book called “An Everlasting Meal,” by Tamar Adler. Modeled on M.F.K. Fisher’s “How to Cook a Wolf, “ it lives up to its subtitle, “Cooking with Economy and Grace.” Adler is a former magazine editor (she used to work at Harper’s) who went on to cook for Gabrielle Hamilton, at Prune, open her own restaurant in Georgia, and also then work for Alice Waters. She knows what she’s doing in the kitchen.

Her book is very captivating and inspiring, because she takes her rich professional background and gears her writing towards regular home cooks. She starts with completely wacky suggestions about boiling meats and cooking the bejesus out vegetables, and salting everything in sight high heaven, but her writing is so clear, so—for lack of a better description—perfectly seasoned, that it’s impossible not to start thinking that she’s right about everything.

Reading her book is like going on a trip to a foreign land, not in that it is like a travelogue (though she’s been all over the world), but in that spending time with its pages is like spending time overseas. There are very different customs in the mental and emotional place where she lives, and I’m not just talking about the boiled meats. The world in which she seems to inhabit is full of delicious things, from a simple egg to a salad of parsely, to homemade pickles and head-to-tail eating. Basically, she makes you feel like everything can taste great, if you just know how to look at things.

I have the feeling I’ll have more to say about Adler and her book soon—it has changed my perspective on cooking, and if I can just get out of my own way, I, too, can live in the beautiful place where there’s always sliced radish available for an impromptu guest.

In the meantime, I’ll share the very important message I got from the book. I don’t know if this is what she meant to say, but I heard it telling me, “don’t give up; keep going.” At least those are the thoughts that sprung into my head on Friday evening when my oven broke.

We were having an old friend of Santa Maria’s who was visiting from Dublin over for dinner—a simple dinner with the kids of hot dogs, homemade hamburgers, a green salad, and my oven-roasted French fries. I prepped everything in the morning before going to work. I washed the lettuce, I made the hamburgers, I sliced the potatoes, and I left things for Santa Maria to put together that evening. I knew I’d be coming home from work just in time to eat, but not in time to do any cooking.

When I arrived home, the fries were in the oven, but the oven was only at 265 degrees. They looked sad and pale, and eventually, we had to give up on them. The oven wouldn’t heat. I’m not sure what’s wrong with it, but I’m going to have to pay to find out.  That night, we ate what was ready, which was fine, if a bit Atkins-y: Hamburgers, salad, hot dogs, buns, and some extra bread for the kids instead of the French Fries.

Later, when I was cleaning up and doing the dishes, I took those cold and depressive potatoes out of the oven. My first thought was to throw them out, but I thought it would be wrong to waste so much food, and I heard the voice of Alder’s “An Everlasting Meal” whispering in my ear. She wouldn’t throw them out. She poaches eggs in olive oil, and I thought, what the hell, I could cook these dead-on-arrival fries in some olive oil and see what might happen.

I poured a bunch of oil into a large frying pan, and I dumped the potatoes in. I cooked them on a medium to low heat with the cover on while I did the dishes. Every so often, I lifted the cover and moved them around with a spatula. I noticed a curious thing—they were turning golden brown and getting crispy. By the time the kids were in bed and the dishes done, I had a batch of crispy, oily, salty fries, that you would pay good money for on the streets of Dublin at two A. M. We ate them with relish, and I think Adler would have been proud.