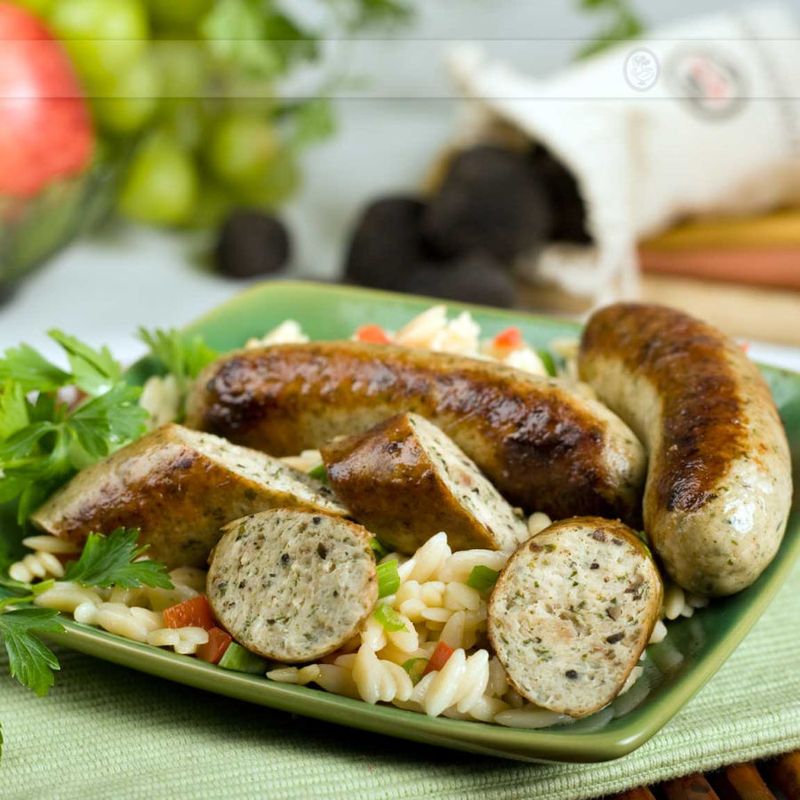 “Kids today, they grow up so fast.” I suppose parents have been saying that since the beginning of time, but I know it’s true in one regard for Nina and Pinta, and I have no one to blame but myself. It took me half a lifetime of living before I tasted my first truffle (and I have a funny story about my long road to my first encounter with their succulent flavor), but my girls have had them many times over.

There are two nights a week that the girls’ babysitter ends up giving them dinner, and on those evenings I want to make it easy for her. Usually, I have her serve them an old standby like black beans and rice, pesto pasta, or Amy’s frozen pizza, but lately I wanted to switch things up. I put D’Artagnan’s very delicious Chicken Truffle Sausages, which we used to eat fairly frequently, back into the mix.

They had them tonight, and the babysitter told me that they each ate two links. That means they really liked them. I had asked her to cut the links in little nickels and brown them. “They counted out the pieces,” she said. “Fifteen each.”

I like the sausages for two reasons, and here's why they're a worhty quick dinner trick.

Long before I became a parent, and even before I was married, I took a trip to Provence with Santa Maria and I secured a travel-writing assignment to help pay for the journey. I pitched a magazine that shall remain nameless on a “Truffles of France” story, and they bought it.

The thing was, at that time I had never once tasted a truffle. And for what they were paying me, I wasn’t about to get a chance to taste many, I mean any (their fee covered the airfare, and that was about it). So I did the logical thing and got an expert, an English woman who led fancy truffle tours for wealthy people, to describe the flavor for me. She gave me a priceless quote. “Truffles are like B.O.; once you smell them one place, you smell them everywhere,” she said. But the editor of the piece changed the quote so it read in print, “Truffles smell like B.O.”

Fortunately, I don't think the woman ever saw how she was misquoted. The piece was published before the age of the Internet, back before I was really grown up myself.