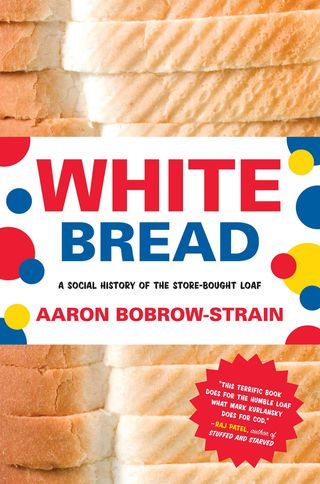 As I mentioned on Monday, I’m not much of a baker. Cakes, breads, and other starchy delights interest me mightily, but my interest, until recently, has stopped at eating them. I never learned how to make anything in an oven that didn’t at some point in its life move on its own.

But that is changing. After eating Santa Maria’s homemade birthday cake, how could it not? And recently, I was sent a copy of a fascinating new book, “White Bread: A Social History of the Store-Bought Loaf,” by Aaron Bobrow-Strain, a dad and an associate professor of politics at Whitman College in Washington.

In the introduction to the book, Bobrow-Strain tells of being twenty-five, in the mid nineties, and offering to bake twenty loaves of bread for a friend’s wedding, though he had nothing but “one cheap oven and no electric mixer.”

“The bride and groom were devout Christians and bread radiated spiritual connection for them. For me, it evoked community and sharing. The word “companion” itself came into English from the Latin from com and pan—“with bread.” To share bread, I thought, was to tap some ancient chord of togetherness.”

I loved learning the etymology of companion, and someday I’ll learn how to bake bread, too. A good place to start, I would think, would be with my friend Elisha Cooper’s “Bread for Simpletons” recipe, which he shared with me a few years ago. Cooper’s recipe is below, following a few thoughts on baking bread with kids from Bobrow-Strain, who clearly knows what he is doing. He wrote a book on the stuff, after all.

I recently came across a 1974 New York Times column by the great Craig Claiborne (definitely not a dad).  In it, he offers readers the following instructions for generating steam in their home ovens (steam during the initial phase of bread baking puts the crisp crust on European artisan loaves):

Take two iron ingots, about 6-10 pounds in total, and heat them on a stove burner until “fiery hot.”  Then, “using extreme caution and wearing padded asbestos gloves” transfer the glowing ingots to a baking pan at the bottom of your oven.  Next, place your loaves in the oven and pour boiling water over the ingots.  This will immediately produce billows of scalding steam so “shut the oven as hurriedly as possible.”

I was hooked after “fiery hot” and “asbestos gloves”—what a great project to try with kids!

“Or maybe not,” my wife commented from the other room, reading my mind.

I’m a slightly obsessive amateur baker and author of a new book on the history of fluffy white bread (America’s ultimate icon of industrial eating), but I have to confess something here.  My kids don’t really like to bake bread—they like to eat bread.  And they like to putter around the edges while I bake.  But they don’t yet have the patience to see a loaf of European artisanal bread through its 8-15 hours of waiting.  Or even through its short bursts of mixing, shaping, and baking.

Instead of fighting this, I weave my kids into the baking process with quick, fun activities.  Since I’m a food historian, they usually derive from an oddity of the past.

In 1939, scientists at the Wallace and Tiernan Laboratories in Newark hooked a ball of dough to two electrodes, cooking it perfectly evenly with no crust formation.  This demonstrated something that most bakers already knew: bread’s rich, nutty flavor comes primarily from browning reactions in the crust.  No crust, no flavor.

When I asked another dad, who is an experimental physicist when not brewing beer, how to reproduce this experiment, he offered an easy option: microwave the dough.

It was an immediate hit, and a great source of instant gratification at precisely the stage in baking when my kids start to lose interest in the slow, slow sugar magic of yeasty fermentation.

Here’s how it works:  have your kids shape a small lump of rising dough into a ball (about the size of a golf ball).  Then microwave it on low for about a minute, or until the dough has doubled in size (and just before it bursts into flames).  The result—as predicted by science—is a doughy, flavorless gumball.  But my kids love it more than anything.  Hands down it’s their favorite thing to do on baking day.

Finish with a Pizza

European artisan breads need to cool for at least an hour, if not more, after baking.  Tearing into a loaf too soon interrupts key chemical processes of flavor and texture development—but try telling that to your kids.

Instead, I distract them with an old Italian bakery tradition: set aside a hunk of raw dough (it can sit on the counter or in a bowl under a damp towel while you proof and bake your loaves).  Then, as soon as you take your bread out to cool, take advantage of the hot oven and baking stone by making a pizza out of your leftover dough.

There’s a lot of talk these days about how to make “the perfect” pizza crust.  All kinds of complicated formulas and mystical thinking circulate on this topic.  But, really, any well-fermented Italian or French bread dough will make a delicious pie.

Let your kids stretch out the crust. It will get dropped on the floor and torn full of holes, but they’ll love it (and it’ll distract them from the cooling loaves).  Top the crust with whatever you have around.  A simple pizza bianca (topped with olive oil, salt, and rosemary) is easy.

And here is Cooper’s recipe for bread for simpletons. Cooper’s baking technique might be modest but he’s quite accomplished outside the kitchen. He’s a talented artist and the author of a number of lovely children’s books, the latest of which, “Homer,” is due out shortly.

Mix the flour, salt, yeast, and water in a bowl in the morning.
Let it sit all day with saran wrap across top of bowl (think about other things, go on about your business).

When ready to bake the bread:
Heat oven to 425 degrees.
Throw the dough in whatever shape on cornmeal-sprinkled pan and wait fifteen minutes.
After the quarter-hour passes, fold the dough over on itself.
Place in oven and bake for 22  minutes (or however long), until it browns and it sounds hollow when you whack its belly.
Eat!