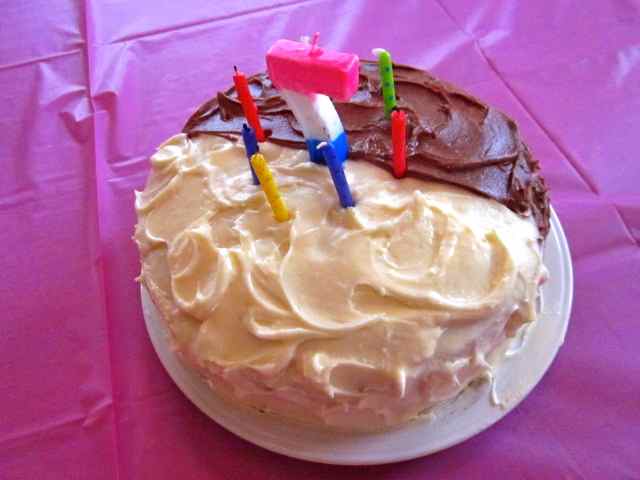 I think I have been doing something wrong all my life--I have failed to learn how to bake. We just celebrated Nina's birthday, and Santa Maria made from scratch the cake pictured above. It was the lightest, freshest, most delicious confection I have ever had. After one bite, I was convinced that I needed to learn how to make things like this myself.

I never learned to bake, in part, because I never really had much of a sweet tooth. Growing up, my mother was too busy raising five kids and tending to a husband who couldn't do much more in the kitchen than make coffee. So desserts when I was a kid ran more along the lines of ginger snaps from the bag or rice pudding (my mother always had a practical mind, even when it came to desserts).

Santa Maria, on the other hand, is one of two kids, and her mother specialized in baking pies and making cakes and cookies. Whenever we go to visit her, it's like going to a bakery. So Santa Maria knows how to make cakes that stop clocks.

Even before the cake was served, the party was a great success, but do you know how much energy is burned entertaining fourteen kids on your home turf? Enough to power a small city for about three weeks, and my energy is gone. I promise to get that recipe for the cake to you shortly, and in the meantime I'll leave you with something more practical than a cake recipe (I am my mother's son, after all).

We served pizza to the kids, but I wanted something more substantial for the adults. I made my Tuscan white-bean soup, and a big pot of my dhal. The central thing to making the dhal is its chicken-stock base. When I looked in the freezer yesterday for chicken stock, though, I couldn't find any. Worse, I couldn't find any chicken carcasses to make some stock anew. I've been eating one or two chickens a week this winter, but I have neglected to save any bones. Here's a reminder: save your bones for stock.

I wasn't worried, though, because stock or no stock, I've learned a great trick for giving any dish a rich base--sneak an anchovy or two into it and you'll add more flav0r (and no fishiness) than you can imagine. It might not be a cake recipe, but it will still please your palate. Trust me, you can do it.

And I promise to write up that cake recipe shortly. The world should have more cakes in it like the one Santa Maria made today.

Pesco Vegetarian Red Lentil Dhal
Heat the oil in a heavy sauce pan
Add the onion, bay leaves, and cinnamon stick
Saute until the onions are translucent
Add the garlic, ginger, anchovies, and the cayenne
Continue cooking another few minutes
Add the lentils and stir to coat them with oil
Add the chicken stock and the water
Add the lemon juice and the squeezed halves of the fruit
Add the salt
Bring to a boil
Reduce to a simmer
Cook for about a half hour, until the onions mostly break up and the lentils more or less dissolve. If it looks like it needs more water, add some. Remove the lemons, cinnamon stick, and bay leaves after about half an hour.
Notes:
This freezes remarkably well. It is best served with rice. To make it more fancy, caramelize some onions to go on top, along with some plain yogurt, and some chopped cilantro

Posted at 07:57 PM in Then Dinner, Vegetarian | Permalink | 0 comments