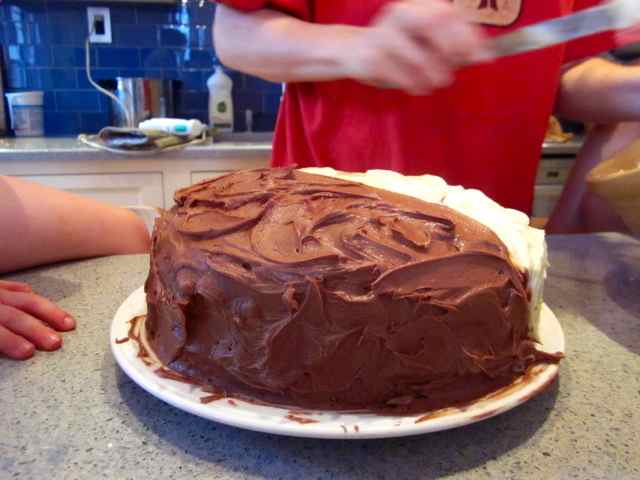 As I promised earlier in this week of posts about baking, here is the recipe for the cake Santa Maria made last week. I swear that it was so good that I can still taste it in my mouth: light, fluffy, sinuously vanilla-y, and delicious beyond belief. I’m tempted to go make it myself right now, it’s that good.

Santa Maria was kind enough to write the recipe up, and here’s how the cake came about, and how to make it.

I found the following recipe in “The Joy of Cooking” and I vowed to make it the week before my big darling’s birthday.  Then the eve of the party rolled around. I was tired and frazzled as usual and thought, “I don’t want to make a complicated 4 bowl cake! Let me find an easier recipe.”

“The Joy of Cooking” accommodated and, a few pages later, I duly found a "Quick or Lightening Cake" recipe.  But then I read its description: “We all want a good cake in a big hurry.  But let’s not delude ourselves that shortcuts make for the best textures or flavors.”

Vanilla Yummy Cake, adapted from "The Joy of Cooking"

Have ingredients at room temperature (about 70 degrees). I like to use organic ingredients whenever possible.

Sift (then measure) – yes, it’s a pain, but the cake is a lovely combination of rich and light:

In a separate bowl, cream until fluffy:

In yet another bowl, combine:

Add the sifted dry ingredients to the butter in 3 parts, alternating with the liquid combination.  Stir the batter until smooth after each addition.

Whip until stiff (but not dry – whatever that means) – I just did it until the whites stand in firm peaks:

Fold them lightly into the batter and bake about 25 minutes.

When cool, ice with the following:

Mix these together then add 1 teaspoon vanilla and about 1/3 cup milk until you have a lovely creamy bowl of frosting.

Nina wanted a black and white cookie cake, so I frosted half the cake with the above mixture, then added 1 ounce of melted and cooled 70% dark chocolate to the remaining half of the frosting.  It was a very delectable cake!