Home Archives About
How to Clean Winter Greens: And a Kale Chip Recipe
Mostly Wordless Wednesday: A Raw Food Cookbook

This year, there wasn’t much of a winter in New York City. Granted, we did go sledding once, but it was, literally, the day before Halloween, so I’m not even sure that counts. Other than that freakishly early storm, I don’t think there was any more snow.

It was mild all winter, and now that spring is here, I’m not surprised that the days are as warm as summer. It’s been very pleasant out, and one of the delights of the new season is the return of Blue Moon Fish to the Greenmarket near my house.

Blue Moon catches its offerings off the end of Long Island, and it sells the freshest seafood in the city. But it sells strictly what can be caught in local waters. They have flounder, for example, but you’ll never find them selling Red Snapper. A weekly visit to their stand is a savory part of our summer. So I was very excited on Saturday morning when I received an email from a friend of mine who works there, an artist named Sally Mara Sturman. Blue Moon was back!

Nina and Santa Maria love mussels, and Santa Maria’s first thought was to get a bunch of them. It was my recollection, though, that they wouldn’t have mussels until later in the season. That’s the way it’s been in previous years. Maybe it was the warm winter that changed things, but whatever the reason, they had mussels on their first day back.

Santa Maria picked up two pounds for dinner for the kids and a snack for us. We were headed out to a Nowruz (Persian New Year) celebration that night. Nina ate her share. Pinta, who said she wanted them though she’d never liked them before, tasted one and rejected it.

It was her loss. I cooked the mussels very simply, and the flavor is amazing. Each mussel has a salty outside, and when you bite into it, you can taste the sea in every mouthful. There's a smoky finish that can't be beat. If you have a cast-iron frying pan, you can make them this way, too. It's very easy. I learned about this method from a newspaper column by Mark Bittman more than a decade ago, and every summer they’re a regular part of our weekend feasts. Who knows, maybe the way things are going, they’ll be a part of our weekends in the winter, too.

Rinse the mussels well and pull any beards off them. Use only the intact ones that are completely closed.
Heat the cast-iron pan until hot.
Place the mussels on the pan in one layer.
Cook over high heat until the mussels open, release their juices, and the juices boil off. When the    liquid is gone, the mussels are ready.

Notes: I typically make this with about three pounds of mussels and use two cast-iron pans at the same time. Serve the mussels in the frying pan. Just put it on a pad on the table and enjoy. The pans will develope a salty and smoky residue. Rub the mussels in it before eating. And if you want, you can melt some butter and serve it with them, but it's really not necessary. 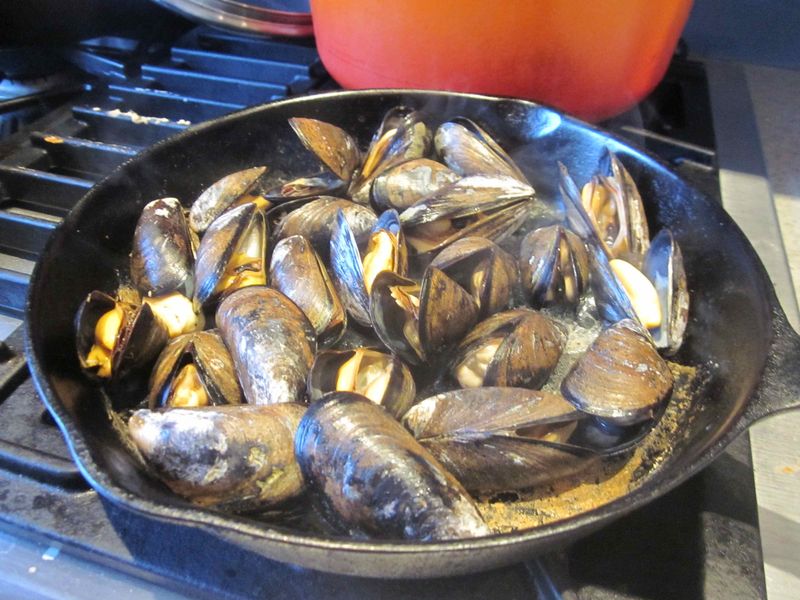